It has been known for centuries that many fish swim in schools, with large groups moving in unison.

But scientists have never fully known why, and have been unable to prove how this behaviour benefits them.

Now, European researchers have used robotic fish to show it it is up to 13.5 per cent more efficient for fish to swim in a group than alone, allowing them to save energy.

This had been the long-standing theory, but it had never been conclusively proven. 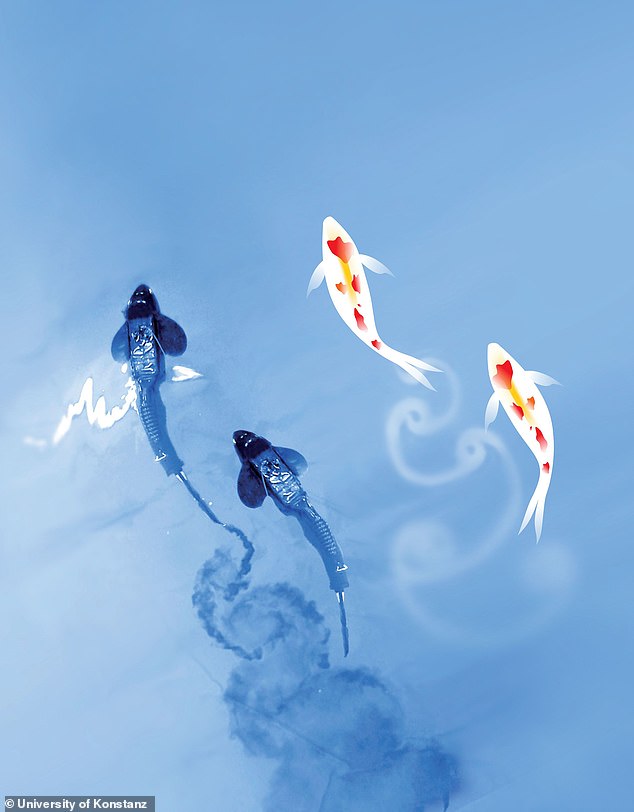 European researchers used robotic fish to prove it is because they allow fish to save energy and up to 13.5 per cent more efficient than swimming alone 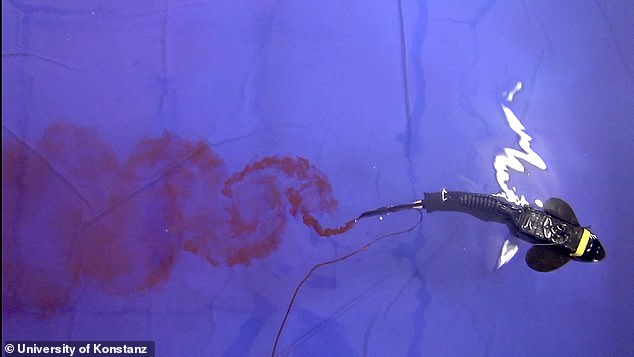 The researchers pumped bubbles out the back of their robotic fish and used lasers to track them and more than 10,000 trials proved the fish synchronise and this saves energy

Scientists from the Max Planck Institute of Animal Behavior (MPI-AB), the University of Konstanz, and Peking University, set about building a lifelike robot to test the hypothesis.

It swims with an undulating motion which replicates fish in the wild and researchers were able to see how certain movements and timings impacted on energy use.

They tested the efficiency of one of the robotic fish on its own and then what happened when there were two of them.

More than 10,000 different trials were run to to see if there was a benefit to being in a group.

The data they gathered is the first of its kind to show conclusively that fish save huge amounts of energy when they are in pairs.

They do this by synchronising their swimming motion in time with the fish in front of them.

However, the robots reveal that the fish do not swim exactly in time with one another, instead there is a slight delay which allows the trailing individual to maximise on the disturbed water churned around by the leading fish.

This leads to vortices of turbulent water, and by delaying their own movements slightly, the school can exploit these vortices.

The researchers pumped bubbles out the back of their robotic fish and used lasers to track them.

‘It’s not just about saving energy. By changing the way they synchronise, followers can also use the vortices shed by other fish to generate thrust and help them accelerate,’ says co-author Mate Nagy, head of the Collective Behaviour ‘Lendület’ Research Group in the Hungarian Academy of Sciences and Eötvös University.

While the lab experiments proved robotic fish can save energy when swimming together, the researchers wanted to know if real fish use this technique.

Their data was pumped into a computer model which predicted how schools of goldfish would swim if they were employing this method.

Real-life footage analysed with AI then revealed they do indeed use the time lag trick, proving it is prevalent in nature.

The findings are published in Nature Communications.