Bake to the future! Robot chef learns to ‘taste’ food at different stages of the chewing process to check whether it’s sufficiently seasoned

A robot chef has been trained to ‘taste’ food at different stages of the chewing process – just like humans do.

The machine, created at the University of Cambridge, consists of a probe that can detect salt levels in food attached to the end of a robotic arm.

Experts used the robot to taste scrambled eggs during different stages of mastication, including a runny liquid as it would appear just prior to swallowing.

According to the scientists, robotic chefs that ‘taste test’ dishes instead of humans could be a fixture of busy restaurant kitchens of the future. 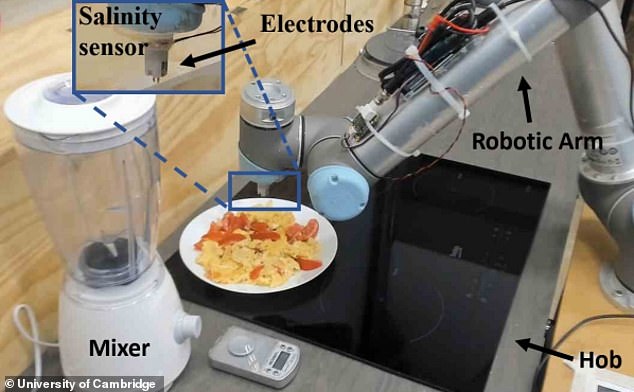 The experimental set-up: The machine comprises a conductance probe (which acts as a salinity sensor) attached at the end of a robotic arm 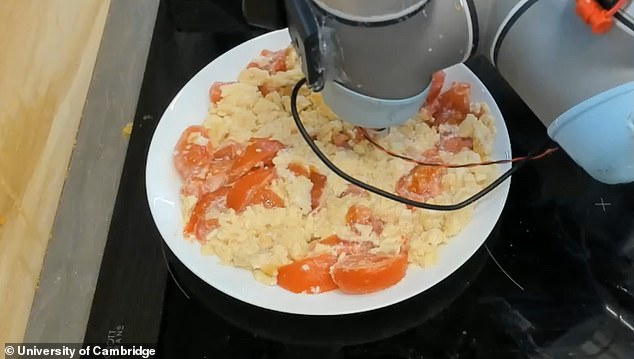 A robot ‘chef’ has been trained to taste food at different stages of the chewing process to assess whether it’s sufficiently seasoned. Researchers used a fairly simple dish of scrambled eggs with tomatoes for their experiments

HOW DO WE TASTE?

The perception of taste is a complex process in humans that has evolved over millions of years.

The appearance, smell, texture and temperature of food all affect how we perceive taste.

Signals from taste receptors are passed to the brain. Once our brains are aware of the flavour, we decide whether we enjoy the food or not.

Taste is also highly individual. Some people love spicy food, while others have a sweet tooth.

A good cook, whether amateur or professional, relies on their sense of taste, and can balance the various flavours within a dish to make a well-rounded final product.

Researchers from the University of Cambridge worked in collaboration with domestic appliances manufacturer Beko for the project.

‘Most home cooks will be familiar with the concept of tasting as you go – checking a dish throughout the cooking process to check whether the balance of flavours is right,’ said Grzegorz Sochacki at Cambridge’s Department of Engineering.

‘If robots are to be used for certain aspects of food preparation, it’s important that they are able to “taste” what they’re cooking.’

As we chew our food, we notice a change in texture and taste as the morsel is broken down by our teeth and salvia.

For example, biting into a fresh tomato at the height of summer will release juices, and as we chew, releasing both saliva and digestive enzymes, our perception of the tomato’s flavour will change.

‘When we taste, the process of chewing also provides continuous feedback to our brains,’ said co-author Dr Arsen Abdulali, also from the Department of Engineering.

‘Current methods of electronic testing only take a single snapshot from a homogenised sample, so we wanted to replicate a more realistic process of chewing and tasting in a robotic system, which should result in a tastier end product.’

The robot chef, which has already been trained to make omelettes based on human taster’s feedback, tasted nine different variations of a simple dish of scrambled eggs and tomatoes at three different stages of the chewing process.

The team did this because breaking down food in the mouth affects the distribution of the salinity.

In other words, salty food can seem more or less salty depending on how much it’s been chewed prior to swallowing.

The three different stages were ‘unchewed’ (as it would appear before consumption), ‘half-chewed’ (slightly broken down in the mouth) and ‘chewed’ (homogeneous and ready to be swallowed). 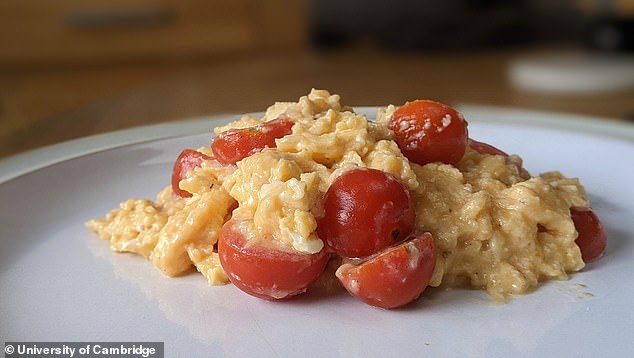 The robot chef, which has already been trained to make omelettes based on human taster’s feedback, tasted nine different variations of a simple dish of scrambled eggs (pictured) 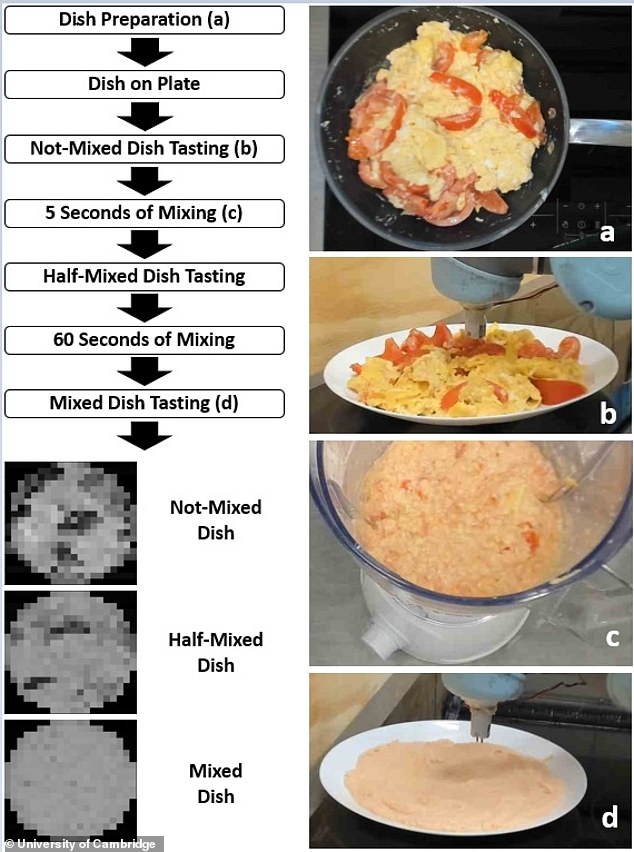 The robot tasted the food at three different stages – ‘unchewed’ (as it would appear before consumption; A and B), ‘half-chewed’ (slightly broken down in the mouth, C) and ‘chewed’ (homogeneous and ready to be swallowed, D)

Rather than a researcher starting to chew the dish and spitting it out, the team used a blender to make the dish appear as if it had been chewed or half-chewed.

At each stage, the robot inserted its conductance probe – which acts as a salinity sensor – into the food, and took a saltiness reading by measuring the movement of ions.

This ‘taste as you go’ approach significantly improved the robot’s ability to quickly and accurately assess the saltiness of the dish over other electronic tasting methods, which are often time-consuming and only provide a single reading. 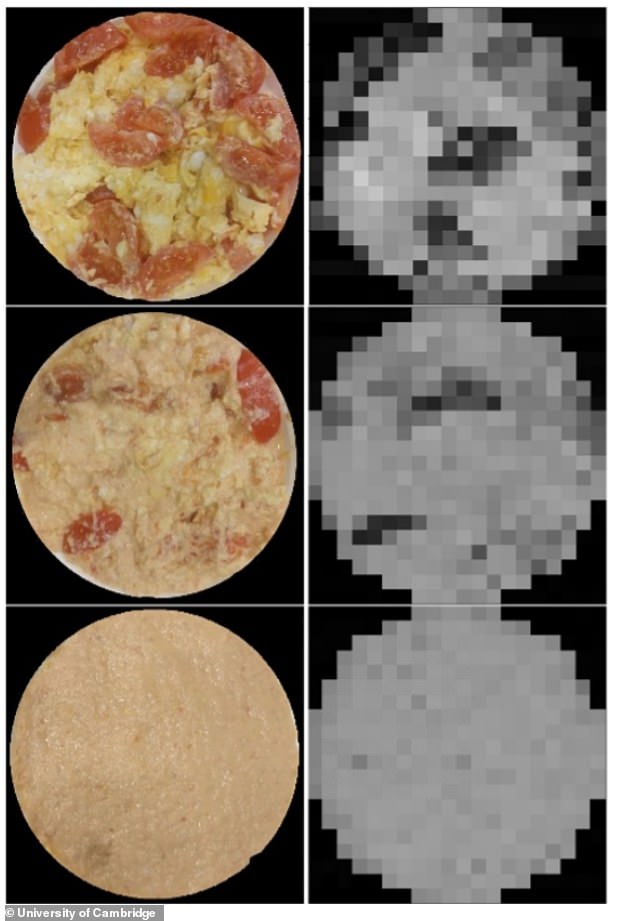 Figure showing the taste mapping of the same tomato scramble after mixing it to three different stages, with unmixed and ”visually homogeneous” being the extreme cases

While their technique is a proof of concept, the researchers say that by imitating the human processes of chewing and tasting, robots will eventually be able to produce food that humans will enjoy and could be tweaked according to individual tastes.

In future, the team want to improve the robot chef so it can taste different types of food and improve sensing capabilities so it can taste sweet or oily food, for example.

‘Beko has a vision to bring robots to the home environment which are safe and easy to use,’ said Dr Muhammad W. Chughtai, senior scientist at Beko.

‘We believe that the development of robotic chefs will play a major role in busy households and assisted living homes in the future.

‘This result is a leap forward in robotic cooking, and by using machine and deep learning algorithms, mastication will help robot chefs adjust taste for different dishes and users.’

The results have been published in the journal Frontiers in Robotics & AI.

It’s been developed in collaboration with Pasadena-based startup Miso Robotics, which is best known for its other robotic chef, Flippy, which can flip up to 300 burgers a day.

Chippy will initially be tested at Chipotle’s innovation hub in Irvine, California, before being integrated into a restaurant in Southern California later this year.

It remains unclear when, or if, Chippy will then be rolled out to Chipotle’s restaurants in the UK.