A robot that is usually used in car factories has been reprogrammed to test samples and carry out experiments in a lab during coronavirus lockdown, scientists reveal.

University of Liverpool researchers have been making the most of the £100,000 automated assistant to run experiments for them while they are working from home.

The robot is significantly more efficient, able to perform up to 700 experiments in a week – the same number a student might complete over the course of a PhD.

It is able to work autonomously by learning from its results and refining the experiments as it goes, making scientific discovery ‘a thousand times faster’.

While the robot is currently looking ways to speed up the reaction inside solar cells, the Liverpool team say it could be put to work in the fight against coronavirus. 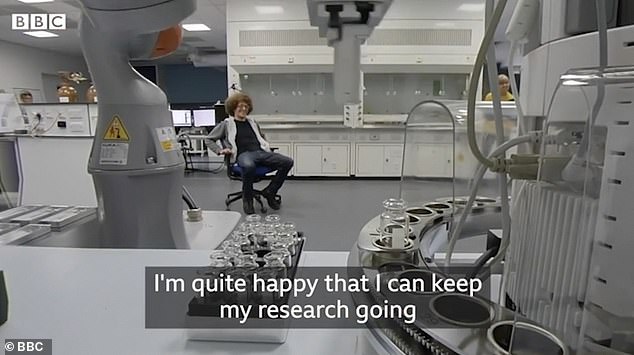 University of Liverpool researchers have been making the most of the £100,000 automated assistant to run experiments for them while they are working from home

In fact the team have already been approached by researchers doing covid and even climate change studies about using a version of the self-learning robot.

Benjamin Burger, one of the developers of the robot, said he could see a future where a central AI brain controls a robot in every lab around the world.

The robotic scientists moves around the lab conducting a range of experiments that involves collecting samples and placing them in different types of equipment.

It is similar to the robotic arms used in car factories but this has more ‘artificial intelligence’ that lets it decide what to do next without input from humans.

‘So our vision is we might have robots like this all across the world connected by a centralised brain which can be anywhere. We haven’t done that yet – this is the first example – but that’s absolutely what we’d like to do,’ he told the BBC.

Using robotics, artificial intelligence and supercomputers in the pursuit of scientific discovery was the subject of a new report by the Royal Society of Chemistry.

They say new solutions should be ‘urgently embraced’ in order to keep science moving forward even if researchers are forced to socially distance due to COVID-19.

Burger said the robot ‘doesn’t get bored, doesn’t get tired’ and works around the clock without needed to take a holiday.

He said this frees up researchers to focus on innovation and new solutions as the robot can ‘go through thousands of samples’ without complaint.

In future these sorts of robots could also be used to undertake risky experiments that might currently be too dangerous to attempt for humans.

This is already starting to happen in space, with NASA developing technology that would allow robots to make repairs to the outside of the International Space Station.

Researchers have also developed a robot that can take nasal and throat swabs from suspected coronavirus patients to limit exposure for healthcare workers. 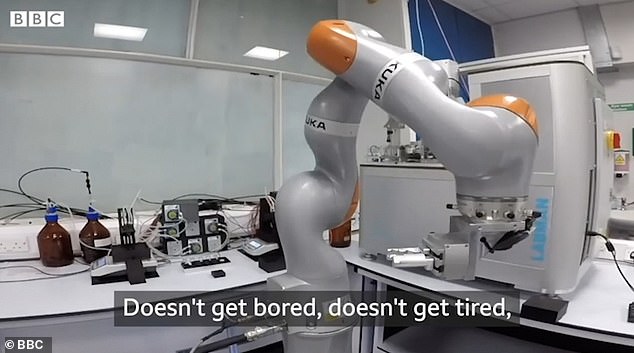 ‘This is about human beings harnessing all of these digital technologies, so that they can go faster,’ Deidre Black from the Royal Society of Chemistry told the BBC.

They can then ‘discover and innovate faster and explore bigger and more complex problems, like decarbonisation, preventing and treating disease, and making our air cleaner,” she said.

Robotics and automation technology in the lab can work nearly 24 hours a day, 7 days a week, according to Andy Cooper from the University of Liverpool.

He said they can carry out very large numbers of experiments, perhaps 700 in a week, whereas maybe a PhD student might carry out 700 experiments over the course of their entire PhD – which could take years.

‘I see these systems being used as tools by scientists,’ he explained.

‘The biggest opportunities are to find reactions, materials and technologies that we simply wouldn’t find without using these methods.’