US engineering company Edge Innovations, which has an animatronic and special effects division, built the lifelike robot, which can cost as much as $5 million (£3.8 million). The dolphin doppelgänger weighs 550 pounds (250kg), and is 8.5ft (2.5m) in length.

Its skin is made from medical-grade silicone associated with TeachKind, part of People for the Ethical Treatment of Animals (PETA).

When I first saw the dolphin, I thought it could be real

And this apparently means anyone touching the robot should not notice the difference with the real thing.

They intend the life-like animatronics currently used in Hollywood films will eventually entertain crowds at theme parks, instead of captive wild animals held in.

READ: Human evolution has NOT stopped as extra arteries are being found in the forearm – study 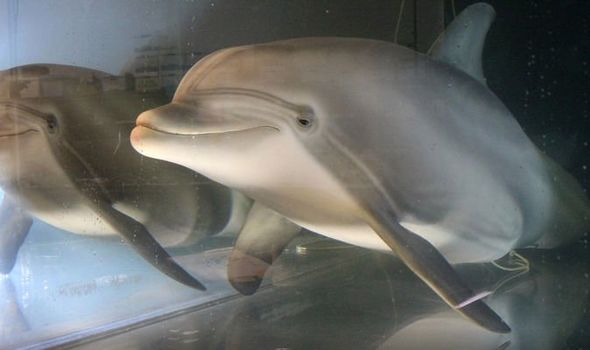 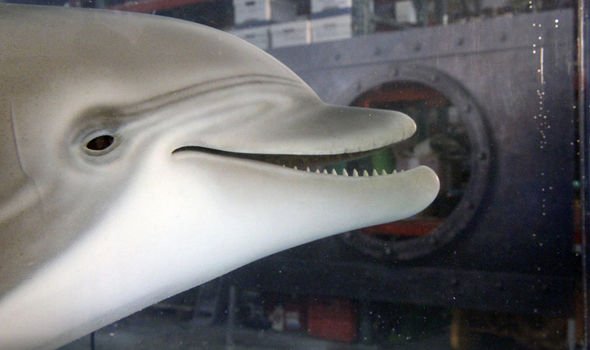 This could see swimmers could dive with robotic great white sharks or even ancient reptiles.

The public have already treated to a preview, which reportedly sees the intelligent animals darting around the pool.

And the consensus is the dolphin unerringly resembles those trained to jump through hoops and perform acrobatics at theme parks around the world.

Reuters reports one woman as saying: “When I first saw the dolphin, I thought it could be real,” said a woman who swam with the animatronic creature. 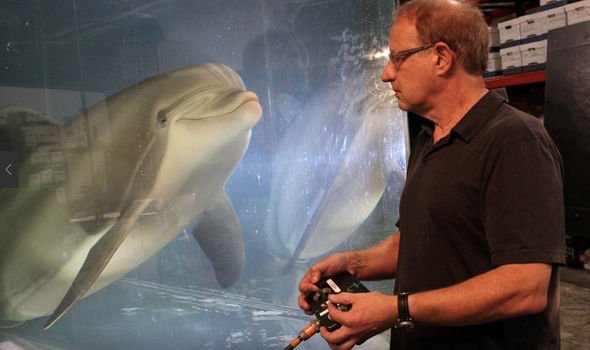 Edge Innovations founder and CEO Walt Conti said in a statement: “There are like 3,000 dolphins currently in captivity being used to generate several billions of dollars just for dolphin experiences.

“And so there’s obviously an appetite to love and learn about dolphins.

“And so we want to use that appetite and offer kind of different ways to fall in love with the dolphin.”

The vast majority of European countries have already banned or limited the presence of wild animals in such performances.

Edge is currently pitching the robo-dolphin to various Chinese theme parks and as many as 150 could be sold in the next three years.

And although this significant amount of money, the company thinks, when factoring-in upkeep and medical costs for live animals, the animatronic ones could pay for themselves in only a few years. 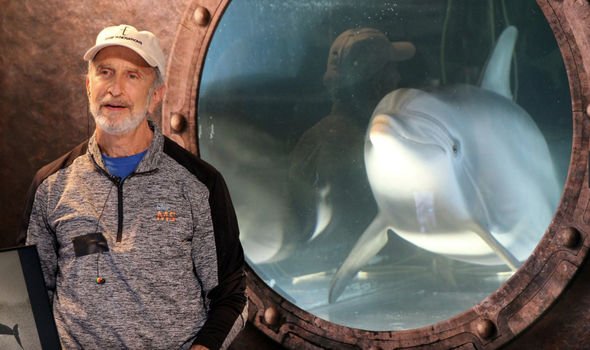 Edge Innovation’s Li Wang said: “In terms of a 10-year business operating period and a two million annual visitor capacity, the overall investment and maintenance costs for a decent animatronics entertainment portfolio only accounts for about one quarter or no more than one-third of what a traditional aquarium spends.”

Roger Holzberg, creative director for Edge’s animatronic program, said in a statement: “The idea of this pilot is really to create a kind of “Sesame Street” under water.

“Those characters taught a generation how to feel about different kinds of aspects of humankind in ways that had never been imagined before.

“And that’s what we dream of with this project.”