Scientists have recorded new musical pulses from a mysterious type of star called Delta Scuti, which burn around twice as bright and twice as hot as the Earth’s sun.

A group of astronomers led by the University of Sydney’s Tim Bedding recorded the pulsing patterns of 60 new Delta Scuti stars.

The team also found that a number of the stars appeared to pulse at frequencies that harmonized with other nearby stars, the first time anyone has documented the phenomenon with Delta Scuti stars. 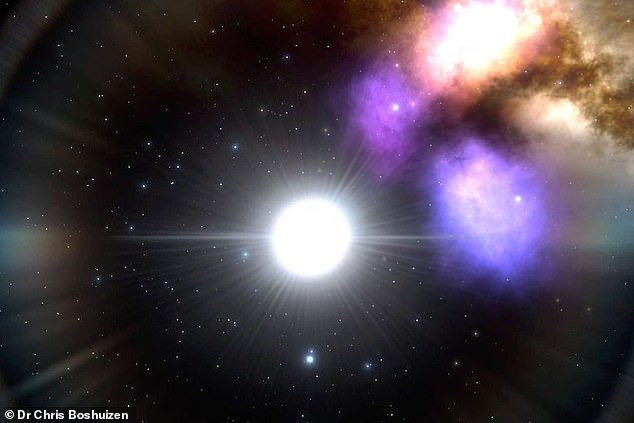 Astronomers measured the pulses coming from Delta Scuti stars and found them unexpectedly musical, with some stars even seeming to harmonize in complimentary frequencies

‘Stars are like a musical instrument,’ Bedding told ABC News. ‘They can play many notes simultaneously and there are all different types of pulsations.’

The team based their research on data from NASA’s Transiting Exoplanet Survey Satellite, which launched in 2018 with the goal of identifying planets outside our solar system.

Initially, the team had expected the pulsing patterns from the stars to sound like random noise, but were surprised to notice some harmonized patterns emerge.

‘It would be like a cat walking on a piano just playing random notes with no method to them,’ Bedding said.

‘But we’ve found some of these stars do have nice chords, not all of them, but a small fraction.’

Star pulses are observed by measuring variances in the light waves emitted by a star, which can be disrupted by internal sound waves produced by burning hydrogen, or small waves produced as different bodies of gas in the star center pass through or near each other.

‘Within stars these pulsations cause the brightness of the star to change periodically – it gets hotter and brighter, or it gets darker,’ University of Birmingham’s Bill Chaplin told Sky News.

‘The pulsations for astronomy are quite a big deal, it gives us the only way of building up a detailed picture of what the inside of a star looks like.’

‘If we measure the periods or frequencies of the harmonics of the star, they tell us about its internal structure.’ The readings were taken from data first collected by NASA’s Transiting Exoplanet Survey Satellite, which launched in 2018 with the goal of identifying planets outside our solar system

The discovery could also be useful in helping researchers detect how old a star is, as newer stars tend to burn at a relatively consistent rate, while older stars develop more erratic pulses.

The harmonizations seen with the Delta Scuti stars are still a mystery, but one explanation could be that they all formed from the same larger gas cloud around the same time before dispersing through the universe.

According to Bedding, it could also just be random chance.

‘Stars in space are oriented randomly so it’s just a matter of luck which ones happen to be looking in that direction,’ Bedding said.