Ancient relatives of modern-day frogs were the size of a fingernail and lived alongside the dinosaurs 216 million years ago.

Bone fragments the size of an eyelash were found embedded in rock and experts believe they date back to the Late Triassic.

The section of hip-bone, known as the ilium, belongs to a group of amphibians known as Chinle frogs – a long-extinct branch of modern frogs. 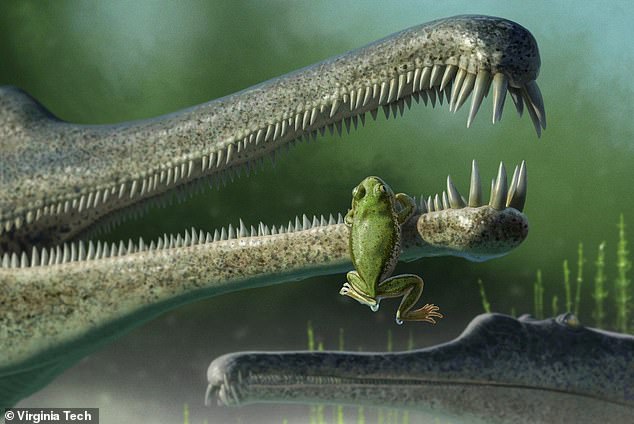 A frog, which is a relative of the modern-day amphibians, was found in a piece of rock and palaeontologists say it dates back 216 million years. They are believed to have been so small they fit on the end of a human finger (artist’s impression pictured)

Palaeontologists from Viginia Tech identified the fossil fragments and claim they are the oldest known frogs in North America.

The fragments are packed into rock and are smaller than a fingernail, according to the researchers.

Researchers found the fragments represent the first known and earliest equatorial remains of a salientian – the group containing living frogs.

It is also thought they are the most-closely related animals in the fossil record to modern frogs.

The name of the fossil derives from where they were found, the Chinle Formation of Arizona.

Dr Stocker, an assistant professor of geosciences at Virginia Tech, said: ‘This new find highlights just how much there is still to learn about the Late Triassic ecosystem, and how much we find when we just look a little closer.

‘We’re familiar with the charismatic archosaurs from the Chinle Formation, but we know that based on other ecosystems, they should make up a small percentage of the animals that lived together.

‘With this new focus we’re able to fill in a lot of those missing smaller components with new discoveries.’

The hip bones are thought to have come from multiple individuals and are long and hollow.

Dr Stocker added: ‘The Chinle frog could fit on the end of your finger.’

Even though the fossils are part of the Chinle frog family, she said they are not yet naming the specific fossils.

‘We refrain from naming this Chinle frog because we are continuing to process microvertebrate matrix that will likely yield additional skull and postcranial material that has the potential to be even more informative,’ Dr Stocker added.

The research team said that the Chinle frog also shares similarities with Prosalirus and Triadobatrachus, from the Early Jurassic and Early Triassic, respectively.

Dr Stocker said: ‘These are the oldest frogs from near the equator.

‘The oldest frogs overall are roughly 250 million years old from Madagascar and Poland, but those specimens are from higher latitudes and not equatorial.’ 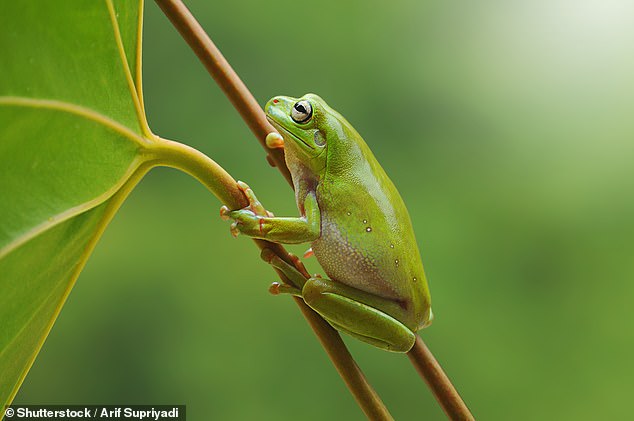 Dr Sterling Nesbitt, also from Virginia Tech, said: ‘Now we know that tiny frogs were present approximately 215 million years ago from North America, we may be able to find other members of the modern vertebrate communities in the Triassic Period.’

He said the new discovery also marks the first time that frog fossils have been found directly with early dinosaurs.

Student Rebecca Hawkins, who was part of the research team, said: ‘I learned first-hand the hard work that paleontologists put into finding fossils.

‘Every day you have to brave long treks, heavy loads, scorching heat, and more.

‘But, with just the right combination of patience and luck, you can find something truly amazing that makes the toil worth it, like a tiny frog hip that tells a big story.’

‘Our aim is to use similar techniques in the Chinle Formation to uncover the early history of other small-bodied animals including lizards, salamanders, turtles, and mammals.’

The findings were published by the online journal Biology Letters.

WHY DID THE DINOSAURS GO EXTINCT?