The remarkable remains of what could be an Anglo-Saxon church have been uncovered beneath the foundations of a long demolished Norman church.

Archeologists working for the controversial new high-speed railway network, HS2, uncovered the ruins during excavation work on the remains of the St Mary’s Old Church in Stoke Mandeville, Buckinghamshire.

Under the foundation layer of the Norman church, built in 1080 shortly after the Norman conquest, the archeologists discovered evidence of another building.

The experts suspect this is the remains of a much older, and previously unknown, Anglo-Saxon church that would have been similar to the still-standing Saxon-era St Peter’s Church in Barton-upon-Humber, North Lincolnshire. 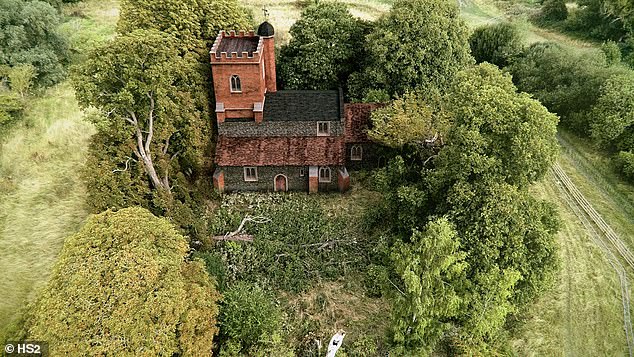 Archeologists working for the controversial new high-speed railway network, HS2, uncovered the medieval ruins during excavation work on the remains of the St Mary’s Old Church in Stoke Mandeville, Buckinghamshire. Pictured is CGI reconstruction of the Norman church 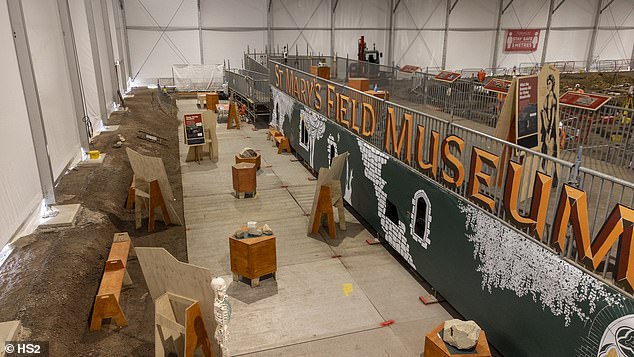 The HS2 team are making the findings from the site, including evidence of the earlier church, available to the public to view as part of a ‘field museum’

WHO WERE THE ANGLO SAXONS?

Anglo-Saxons were a cultural group that inhabited England from the 5th Century, dominating society through the Early Middle Ages.

They traced their origins to migrants from the North Sea coastlands of mainland Europe.

However, the identity of Anglo-Saxon evolved in England, through different groups interacting – including a number of Germanic tribes.

They developed the concept of England itself, and while only 26% of the modern English language uses words from this group, they are the words we use most often.

Regional government, shires and other aspects of ‘England’ as we know it today, date from this period.

The Norman church was demolished in the 1960s by Royal Engineers, after being largely unused since the 1880s, and the ruins are in the path of HS2.

Before any work can be done on the train line, over 40 archeologists have been digging up the grounds, including relocating over 3,000 bodies to a new graveyard.

Following the Norman conquest in 1066, there was a huge church building programme across England from parish churches to larger city cathedrals.

It wasn’t uncommon for some of these to be built on top of conquered Saxon ruins – but it is rare to have the opportunity to excavate and examine them in this way as many did not survive the vast Norman architecture, the archaeologists said.

The church originally being excavated had been renovated in the 13th, 14th and 17th centuries, and played a central role in the community.

It had been furnished with a variety of extensions and the construction of a brick bell tower over its long history.

A new church closer to the centre of the nearby village was built in the 1880s, and at that point the Norman church fell into disrepair, according to local historians.

The Normans weren’t the first to build on what came before though, as the foundations of the Anglo-Saxon building reused Roman roof tiles, the team found.

There is evidence of a nearby Roman settlement so it is possible that the materials were reused from a previous structure away from this location, although archaeologists are hoping that evidence of an even earlier structure could be found.

They were able to determine the existence of the Anglo-Saxon church based on the fact the Norman church structure was built on a light grey compacted foundation band.

Based on other sites previously excavated, they knew this band had been laid by the Normans themselves.

This means that any archaeological deposits found below that band would be pre-Norman, and so it was most likely Anglo Saxon era.

These were enclosed by a circular boundary ditch, and a small number of associated burials. Archaeologists believe it is a Saxon church.

The footprint is similar to a standing Saxon Church in Barton-upon-Humber, St Peter’s, the archaeologists said. 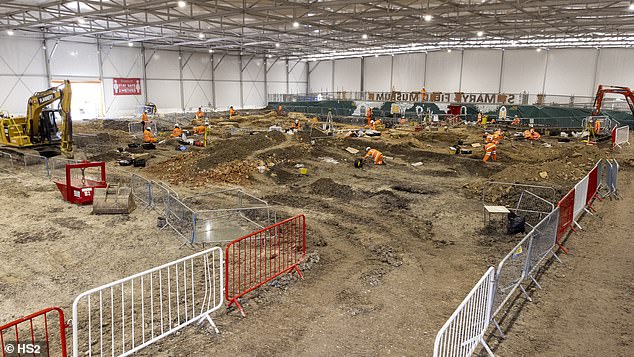 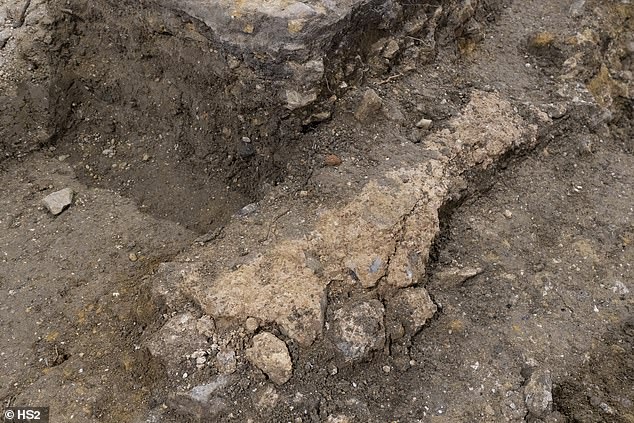 The Normans weren’t the first to build on what came before though, as the foundations of the Anglo-Saxon building reused Roman roof tiles, the team found

WHO WERE THE NORMANS?

The Normans  were the inhabitants of the medieval Duchy of Normandy.

Descendents of Norse Viking settlers, they conquered a range of territories including England and Sicily.

Their dynasty had a major political, cultural and military impact on Europe, particularly noted for culture and Romanesque architecture.

England fell to Normand hands after an expedition on behalf of the duke, William the Conqueror, led to the Norman conquest of England at the historic Battle of Hastings in 1066.

Dr Rachel Wood, lead archaeologist for Fusion JV, leading the work in Stoke Mandeville said: ‘This is a fantastic discovery that we are all very excited to excavate.

‘The work undertaken at Old St Mary’s is a unique archaeological opportunity to excavate a medieval parish church with over 900 years of meaning to the local community.

‘It also gives us the opportunity to learn more about the community that used the church and to understand the lives they lived.

‘To then find an earlier structure beneath the Norman church is outstanding.

‘To have so much of it remaining, including the walls and even some flooring, will provide a great deal of information about the site prior to the construction of the Norman church in 1080AD.

‘The discovery of this pre-Norman, possible Saxon Church is a once in a career opportunity for archaeologists and will provide a much greater understanding of the history of Stoke Mandeville.’

Helen Wass, HS2’s head of heritage, said all artefacts and human remains uncovered will be treated with dignity, care and respect and ‘our discoveries will be shared with the community through open days and expert lectures.’

‘HS2’s archaeology programme seeks to engage with all communities both local and nationally to share the information and knowledge gained as well as leaving a lasting archival and skills legacy,’ she added.

WHAT ARE THE PROPOSALS FOR A 1,000-MILE UK HIGH-SPEED RAIL NETWORK?

A report by Surrey-based think tank Greengauge 21, titled Beyond HS2, said boosting national productivity should be the guiding priority for re-designing the rail network.

The proposals lead to a re-orientation of Britain’s railway – from a single hub around London to a national railway network.

1. An upgraded fast route from Birmingham to Bristol Parkway carrying HS2 trains, continuing to the South West and South Wales.

2. A major upgrade to the East Coast mainline for the first time since the 1980s.

4. New lines in East Essex and Anglia, alleviating the West Anglia and Great Eastern Mainlines, both of which are at capacity.