Plastics may be replaced with a material made from the razor-sharp circular teeth found on a squid’s tentacle sucker pad.

The natural protein is created by the animal and can be made into fibres and films for a range of uses, including smart materials and self-healing recyclable fabrics.

Scientists claim these materials are eco-friendly, biodegradable and sustainable.

The key protein was discovered in the ring teeth of squid – circular predatory appendages on the suction cups located on the animal’s tentacles.

A method has now been developed which allows the protein to be created by manipulating bacteria to avoid harming the cephalopods. 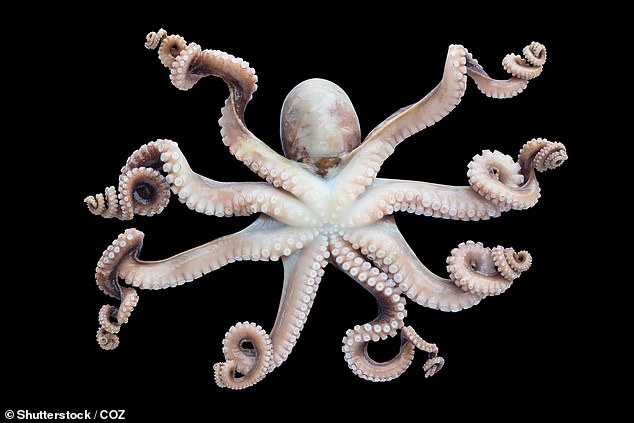 The natural protein created by the animal can be processed into fibres and films for a range of uses, including smart materials and self-healing recyclable fabrics (stock) 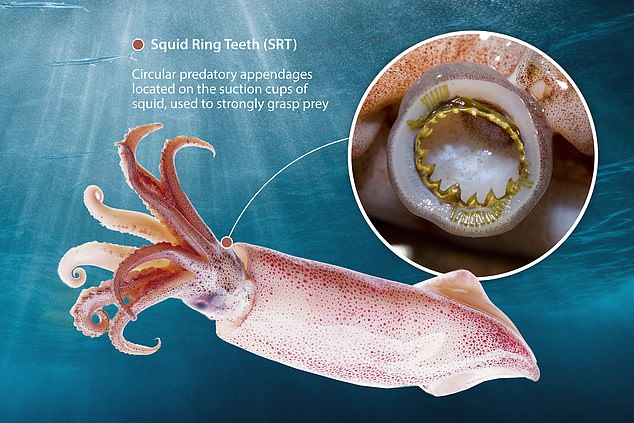 ‘Squid proteins can be used to produce next generation materials for an array of fields including energy and biomedicine, as well as the security and defence sector,’ says lead author Melik Demirel at Penn State University.

‘We reviewed the current knowledge on squid ring teeth-based materials, which are an excellent alternative to plastics because they are eco-friendly and environmentally sustainable.’

The elasticity, flexibility and strength of the squid ring teeth materials comes from the range of ways its molecules can arrange themselves.

Self-healing, optical, thermal and electrical conducting properties are all created with a different layout.

Professor Demeril told MailOnline the SRT proteins self-heal when water, heat and pressure is applied by creating hydrogen bonds between different groups of the neighbouring chains.

Its building blocks allow a process known as micro-phase separation to occur – a phenomenon similar to that of the interaction and lack of mixing between oil and water.

The squid ring teeth materials do this on the the nano-scale.

Two distinct layers can not be created as the fundamental blocks are unable to separate completely – creating a variety of different molecular-level shapes.

Each arrangement behaves in its own unique way and can be manipulated by scientists for the desired properties.

Repeating cylindrical blocks, disordered tangles or regular layers are some of the ways in which the molecules can align.

One use of this technology, the scientists say, would be to create an abrasion-resistant coating to stop apparel from shedding microplastics in the washing machine. 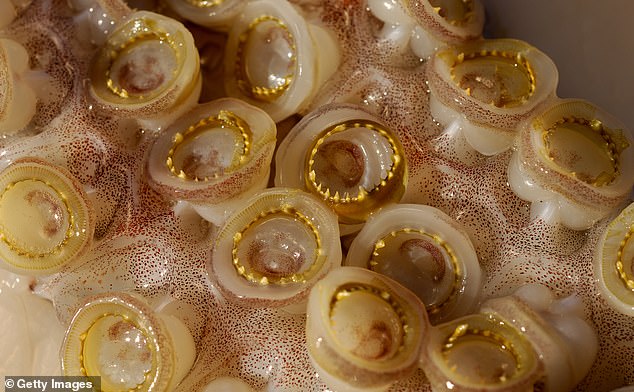 The elasticity, flexibility and strength of the squid ring teeth (pictured) materials comes from the range of ways its molecules can arrange themselves. Self-healing, optical, and thermal and electrical conducting properties are all created from a different layout (stock)

WHAT ARE MICROPLASTICS AND HOW DO THEY GET INTO OUR WATERWAYS?

They have hit the headlines over recent years, as improper disposal has resulted in tonnes of waste making its way into the ocean.

Each year, tonnes of plastic waste fails to get recycled and dealt with correctly, which can mean they end up in marine ecosystems.

Although it’s unclear exactly how they end up in the water, microplastics may enter through simple everyday wear and tear of clothing and carpets.

Tumble dryers may also be a source, particularly if they have a vent to the open air.

Plastics don’t break down for thousands of years and it is estimated that there are already millions of items of plastic waste in the oceans. This number is expected to rise.

Studies have also revealed 700,000 plastic fibres could be released into the atmosphere with every washing machine cycle.

Current water systems are unable to effectively filter out all microplastic contamination, due to the varying size of particles.

More than 80 per cent of the world’s tap water is contaminated with plastic, research published in September 2017 revealed.

The US has the highest contamination rate at 93 per cent, followed by Lebanon and India, experts from the University of Minnesota found.

France, Germany and the UK have the lowest levels, however, they still come in at 72 per cent.

Overall, 83 per cent of water samples from dozens of nations around the world contain microplastics.

Scientists warn microplastics are so small they could penetrate organs.

Bottled water may not be a safer alternative, as scientists have found contaminated samples.

Creatures of all shapes and sizes have been found to have consumed the plastics, whether directly or indirectly.

Previous research has also revealed microplastics absorb toxic chemicals, which are then released in the gut of animals.

Microplastic pollution is a major focal point for not only the textile sector but the wider world as animals, humans and the environment continue to be polluted by them.

The small sections of plastic have a negative effect on the health of animals and work their way up the food chain.

The SRT-based materials would also be able to increase the longevity and safety of biochemical implants and increase the lifespan of chemical and biological warfare suits.

Interweaving multiple layers of SRT proteins with other compounds would allow the development of ‘smart’ clothes to protect the wearer from air pollution.

‘SRT photonics are biocompatible and biodegradable, so could be used to make not only wearable health monitors but also implantable devices for biosensing and biodetection,’ says Professor Demirel.

Plastics are created from fossil fuels and is a dirty process that is polluting the world throughout the life-cycle.

SRT-based materials can be created from renewable resources and researchers have found a way of producing it without catching a squid.

‘We don’t want to deplete natural squid resources and hence we produce these proteins in genetically modified bacteria.

‘The process is based on fermentation and uses sugar, water, and oxygen to produce biopolymers,’ explains Professor Demirel.

The research was published in the journal Frontiers in Chemistry.