‘Rarest ever’ mosaic depicting the Trojan War is found in Syria: Remarkably intact artwork that was created 1,600 years ago shows colorful images of ancient Greek soldiers and Amazons who fought in the epic battle

A 1,300-square-foot mosaic uncovered in Syria depicting scenes of the Trojan War, a legendary conflict that took place between the ancient Greeks and the people of Troy more than 2,000 years ago, is the ‘rarest’ ever to be found due to how remarkably intact it is.

The stunning Roman-era artwork, constructed 1,600 years ago, is adorned with soldiers carrying swords and shields, along with their names, and images of fierce Amazons who fought alongside the people of Troy.

The mosaic is the latest to be found in Rastan in northern Syria’s Homs district, which the government seized back from rebels in 2018 after years of bloodshed – a year after armed groups attempted to sell pieces of the mosaic in 2017 and listed it on social media platforms.

Archaeologists, who made the announcement Wednesday, have so far uncovered 65 feet of the detailed mosaic in what may have been the floor of an ancient bathhouse, but more investigating needs to be carried out. 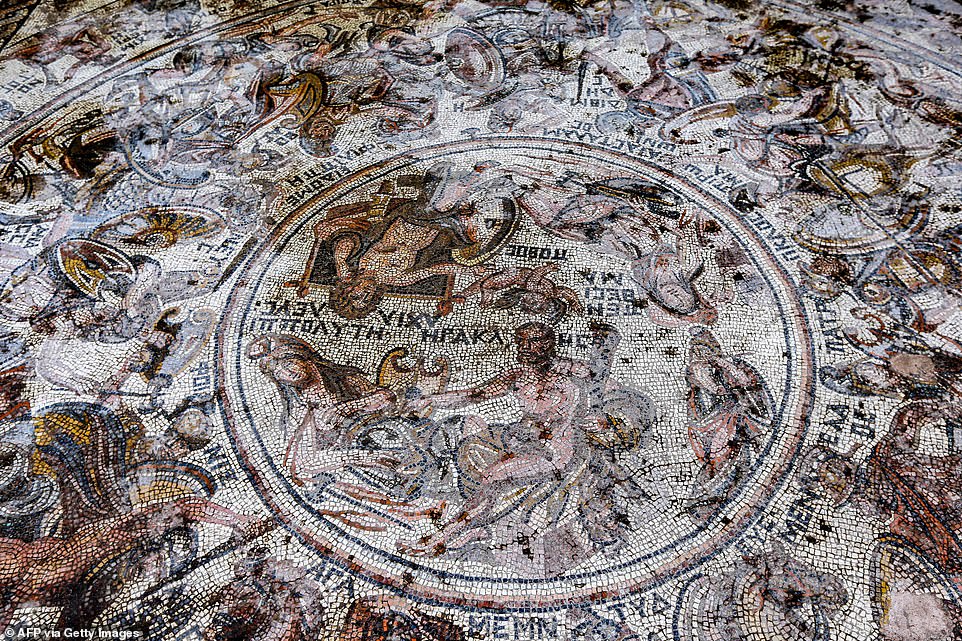 The stunning mosaic was announced Wednesday, along with a gallery of images showing the colorful depictions of the Trojan War that took place more than 2,000 years ago 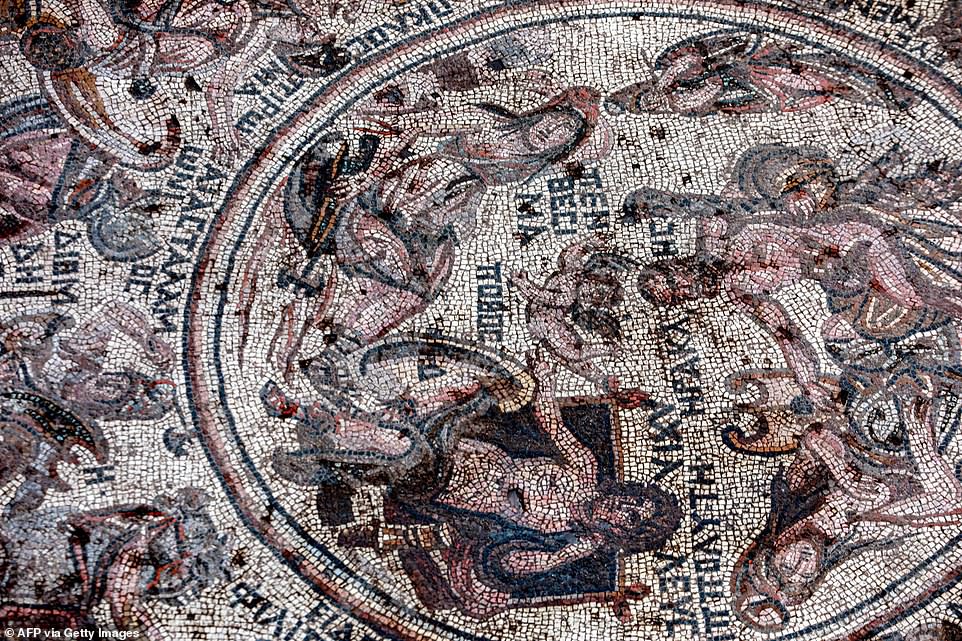 The mosaic features ancient Greek leaders and their names. The war was fought between the ancient Greeks and the people of Troy in the 12th century or 13th century BC 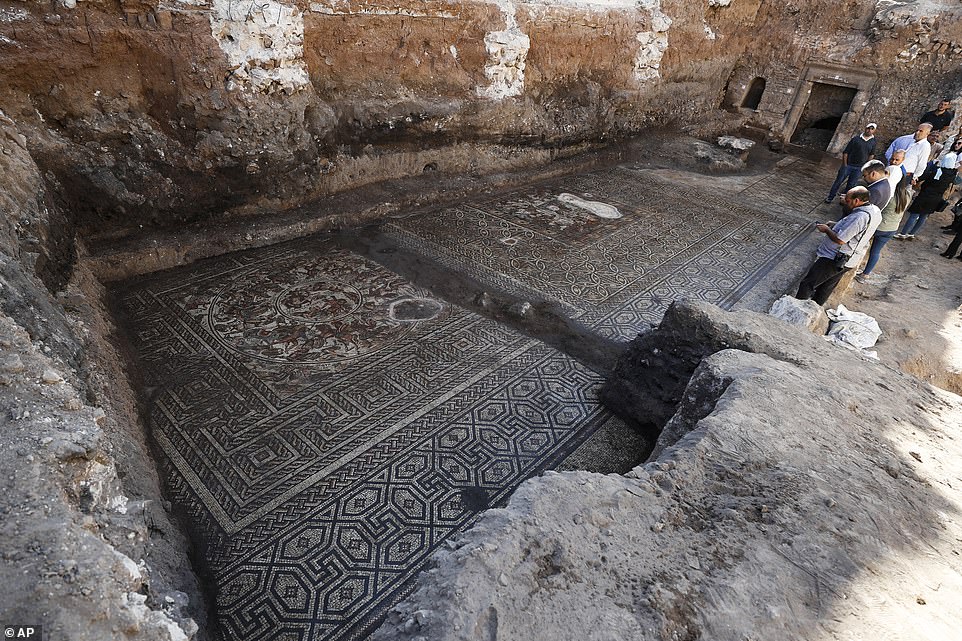 Archaeologists have only cleared off about 65 feet of the mosaic. They believe it may have been the flooring of an ancient bathhouse, but more researcher must be conducted to prove this  theory

Dr Humam Saad, the associate director of excavation and archaeological research at the directorate, said among the scenes the mosaic shows is a rare portrayal of ancient Amazon warriors who fought alongside the people of Troy.

‘What is in front of us is a discovery that is rare on a global scale,’ Dr Saad told The Associated Press, adding that the images are ‘rich in details’, and includes scenes from the Trojan War between the Greeks and Trojans.

The Amazons were a race of female warriors in Greek mythology, who dwelt in the region of modern-day Ukraine.

Two of the best known Amazon queens were Penthesilea, who took part in the Trojan War, and her sister Hippolyta, who was the owner of a magical girdle, given to her by the god of war Ares.

In Ancient Greek and Roman mythology, demigod hero Hercules killed Hippolyta, the queen of the Amazons, in one of his 12 labors. 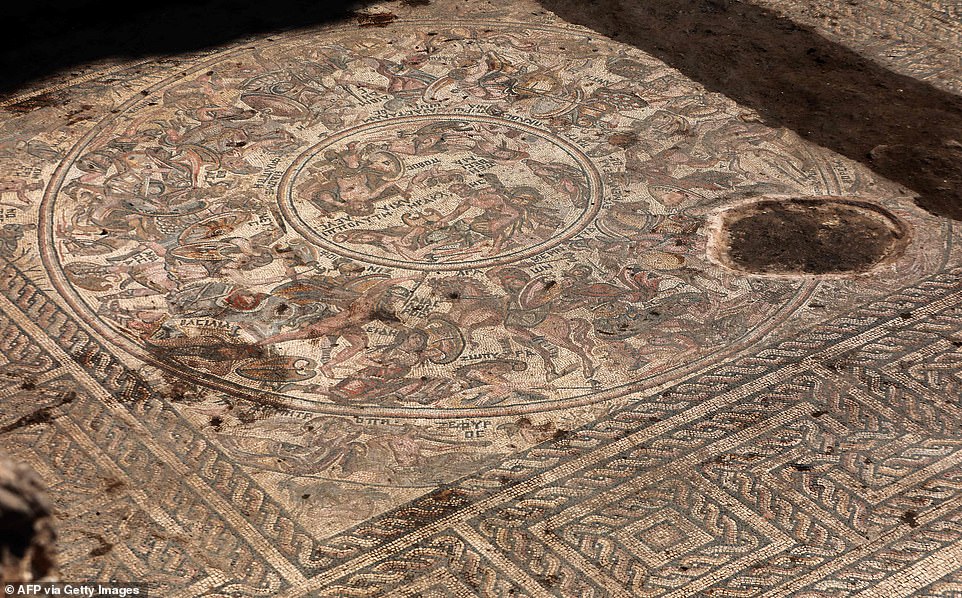 The mosaic is the latest to be found in Rastan in northern Syria’s Homs district, which the government seized back from rebels in 2018 after years of bloodshed. It is intricately adorned with colorful pieces with areas showing the epic battle that lasted for 10 years 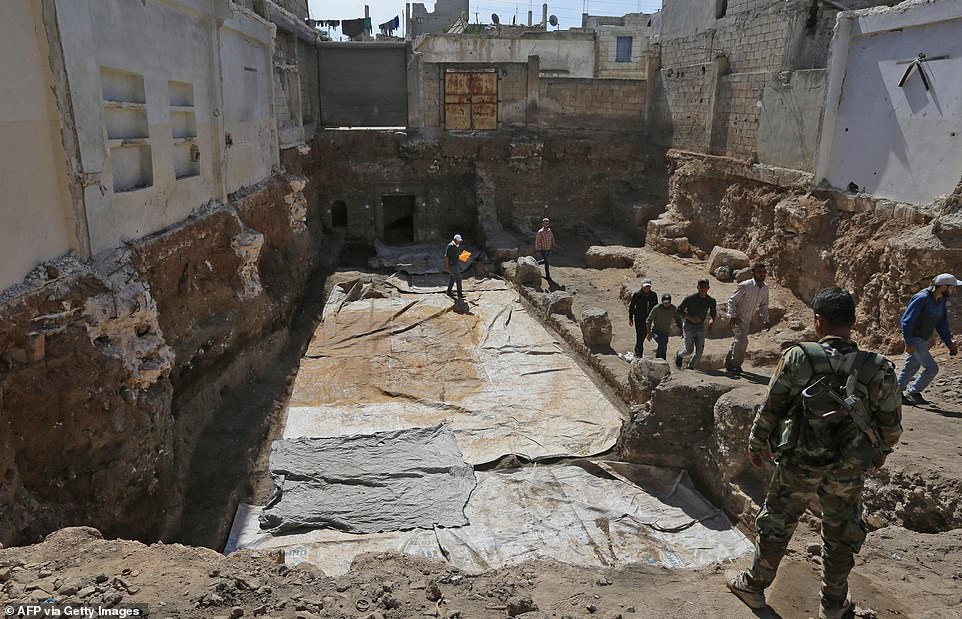 Armed groups in Syria previously tried to sell pieces of the mosaic in 2017. Now, armed guards stand around the excavation site to ensure no one enters the area to steal parts of the mosaic or worse, destroy it 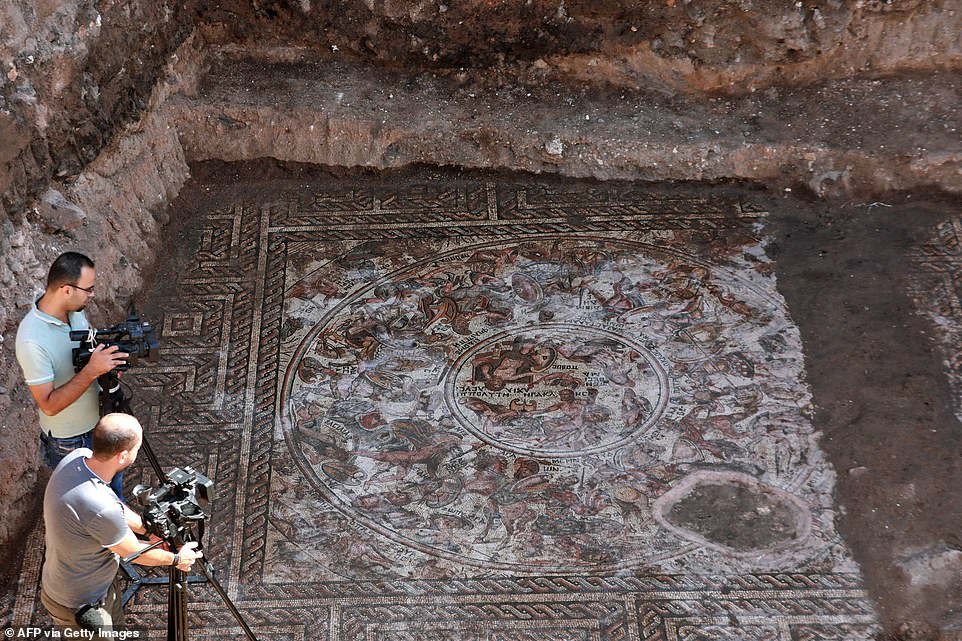 Archaeologists first shared the news with journalists at the site who took a pictures of the amazing find. Pictured is another view of the circular formation showing the Trojan War

The 12 labors were a punishment after Hercules killed his wife and child, but this was only after the Roman goddess Hera made him lose his mind.

The mosaic also portrays Neptune, Ancient Roman god of the sea, and 40 of his mistresses.

The rift between the ancient Greeks and people of Troy began around the 12th century BC, when the Trojan prince Paris abducted Helen, wife of Menelaus of Sparta.

When Menelaus demanded her return, the Trojans refused and in turn, Menelaus persuaded his brother Agamemnon to lead an army against Troy.

For nine years the Greeks ravaged Troy’s surrounding cities and countryside, but the city itself, well fortified and commanded by Hector and other sons of the royal household, held out. Finally the Greeks built a large hollow wooden horse in which a small group of warriors were concealed.

There has been a long-held debate about whether the battle actually took place, but enough evidence has been found that many historians argue its truth – although the giant wooden horse has never been found. 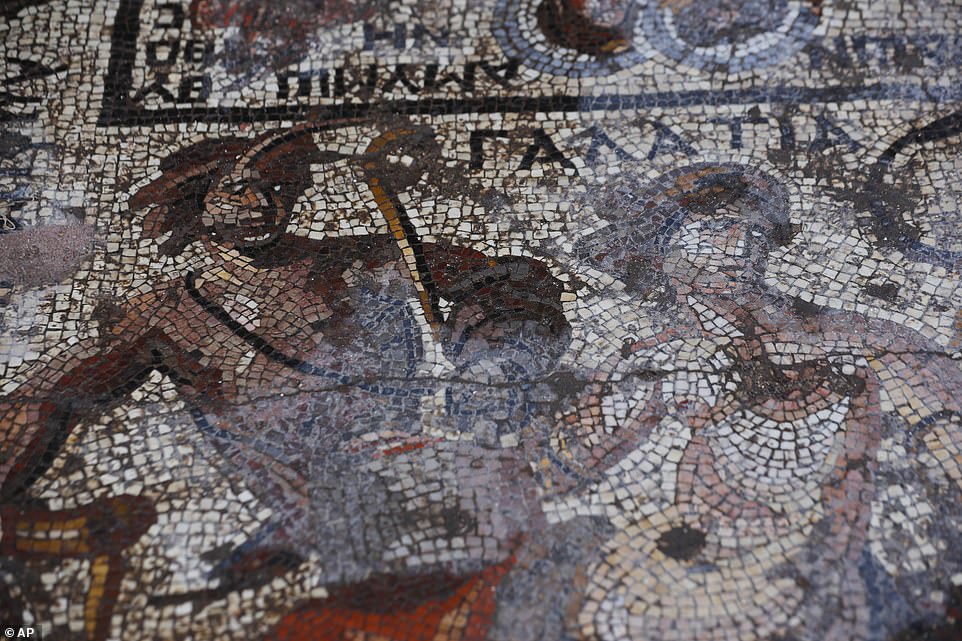 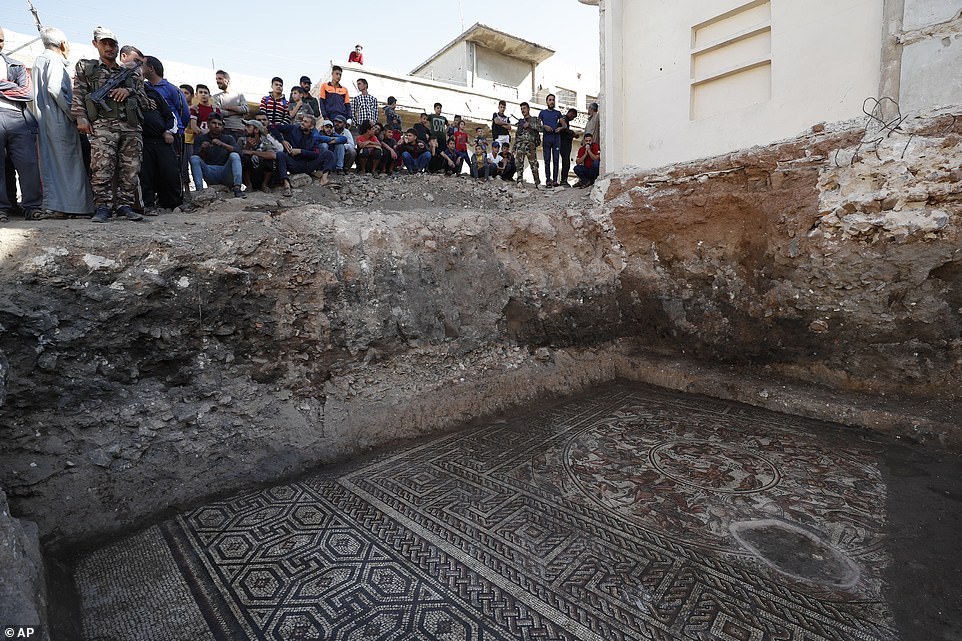 Dr Humam Saad, the associate director of excavation and archaeological research at the directorate, said among the scenes the mosaic shows is a rare portrayal of ancient Amazon warriors who fought alongside the people of Troy 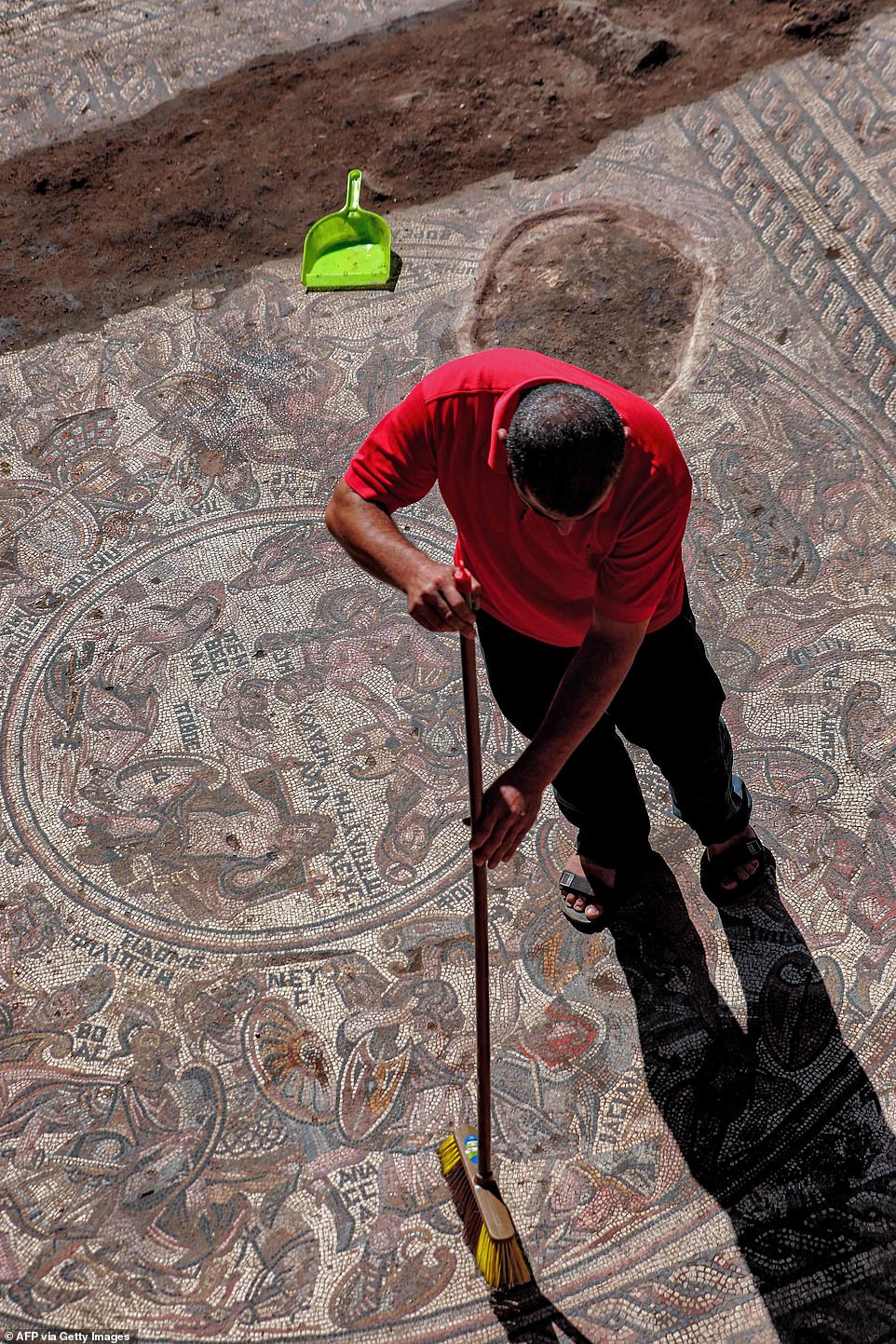 Lebanese and Syrian businessmen from the neighboring country’s Nabu Museum bought the property that dates back to the 4th century and donated it to the Syrian state, allowing archaeologists to dig around with the hopes of uncovering ancient treasures

While the battle may have been real, now all the stories that spread for the war are.

This includes the tale of Achilles, a great ancient Greek warrior who was invulnerable because his mother dipped him in the River Styx while he was an infant.

But, according to ancient Greek mythology, his heel was the only thing not dipped and was his weakness.

In Homer’s Iliad, Achilles strips off his armor in a fit of rage after hearing his beloved was killed by the Troy army and he was shot in the heel with an arrow that instantly killed him.

While some argue Achilles could have been based on a real life soldier, no evidence has been found to support this.

The mosaic is the most important archaeological discovery in Syria since the country’s conflict began 11 years ago.

Lebanese and Syrian businessmen from the neighboring country’s Nabu Museum bought the property that dates back to the 4th century and donated it to the Syrian state.

Each panel was filled with square-shaped, small colorful stones measuring about half an inch on each side. 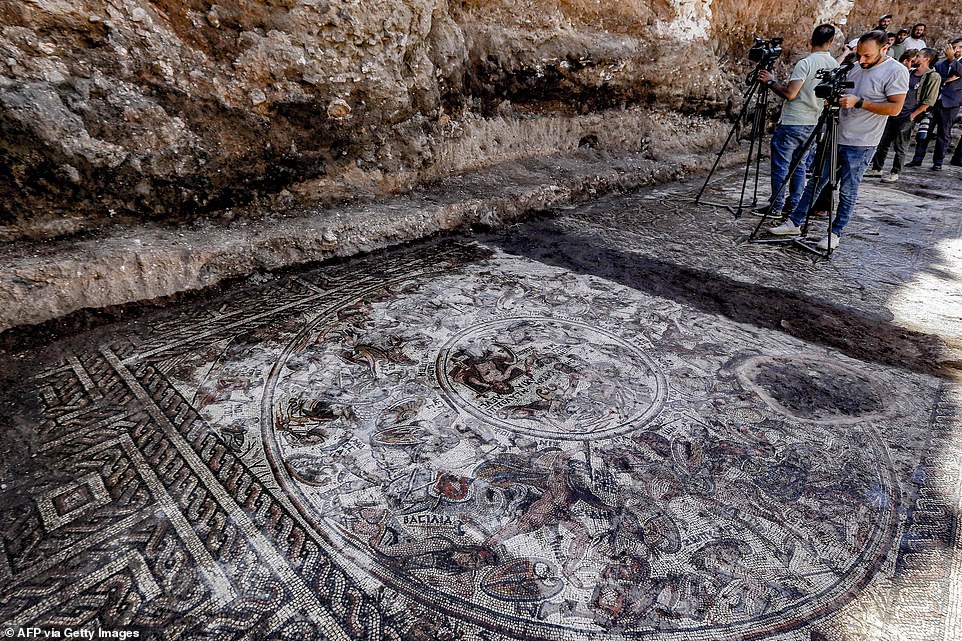 The mosaic also portrays Neptune, Ancient Roman god of the sea, and 40 of his mistresses. The rift between the ancient Greeks and people of Troy began around the 12th century BC, when the Trojan prince Paris abducted Helen, wife of Menelaus of Sparta 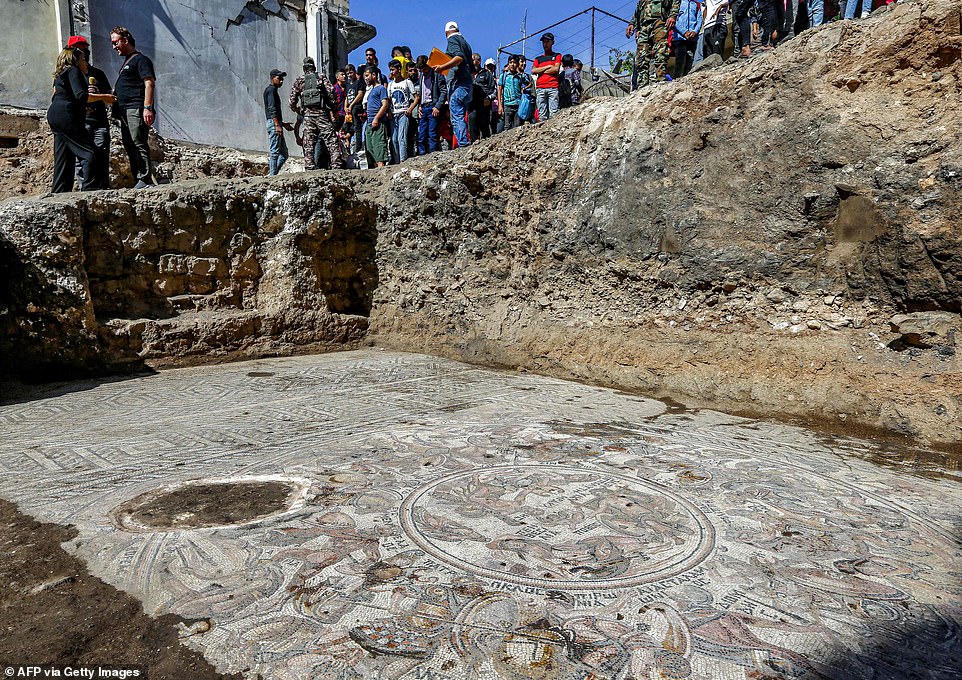 The team plans to keep working around the mosaic with the hopes of reveal its entirety, which could provide more clues about the building it was once inside

‘We can’t identify the type of the building, whether it’s a public bathhouse or something else, because we have not finished excavating yet,’ Saad told the AP.

Sulaf Fawakherji, a famous actress in Syria and a member of the Nabu Museum’s board of trustees, said she hopes they could purchase other buildings in Rastan, which she says is filled with heritage sites and artifacts waiting to be discovered.

‘There are other buildings, and it’s clear that the mosaic extends far wider,’ Fawkherji told the AP.

‘Rastan historically is an important city, and it could possibly be a very important heritage city for tourism.’

Despite Rastan’s historical significance in the country, Dr Saad said there have not been significant excavation efforts in the town prior to the country’s armed conflict.

The Trojan War that started over a lost lover: Prince of Troy’s love for another king’s wife led to 10 years of war

On April 24, 1184 BCE, Greek armies invaded the city of Troy, in modern day Turkey marking the end of the Trojan War.

The war had been sparked a decade prior when Helen, left her husband Menelaus, king of Sparta for Paris of Troy after Goddess Aphrodite made her ‘fall in love’ with him.

Menelaus convinced his brother Agamemnon, king of Mycenae, to travel to Troy to retrieve Helen.

The pair were joined by Odysseus, Nestor and Ajax, and accompanied by a fleet of more than a thousand ships.

The siege lasted 10 years and was interspersed with  battles, fights and deaths of legendary figures.

It ended when the Greek armies retreated from their camp, and left a large wooden horse outside the gates of Troy. Bemused Trojans pulled the ‘gift’ into the city, but when night fell, a group of Greek warriors climbed out and sieged Troy from within.

The tale has been retold through time, most famously in Homer’s Iliad, which recounts the story of Odysseus’ journey home to Itchaca.

For centuries, it was widely believed that both war and the city were mythological.

However, now most scholars believe Troy was real in what is now Hissarlik in Turkey.

‘Unfortunately, there were armed groups that tried to sell the mosaic at one point in 2017 and listed it on social media platforms,’ he said.

Syrian heritage sites have been looted and destroyed over the past decade of ongoing violent conflict.

Among the most notable incidents was the so-called Islamic State group taking Palmyra, a Unesco World Heritage Site that boasts 2,000-year-old towering Roman-era colonnades and priceless artifacts, and partially destroying a Roman theater.

Meanwhile, Syria’s cash-strapped government has slowly been rebuilding Aleppo’s centuries-old bazaar after reclaiming it from armed opposition forces in 2016.