Rare footage of ‘phantom’ sharks, formally known as porbeagle, swimming off the coast of Rhode Island and Massachusetts shows the apex predators challenging each other in what could either be a duel over a mate or hunting grounds.

The exciting video and images of the encounter was captured by Joe and Lauren Romeiro, a husband and wife duo that researches sharks through non-invasive sampling techniques, who were able to get up close with these porbeagle sharks that primarily stick to deeper, colder waters.

Two sharks first appear in the dark waters, circling each other, and then three others join the spectacle in what thee team calls ‘the motherload’ – it is very rare to see one porbeagle, let alone a group.

The Romeiros have spent countless hours observing sharks off the coast of New England, but sightings of the porbeagle is so rare they dubbed it the ‘phantom’ shark. 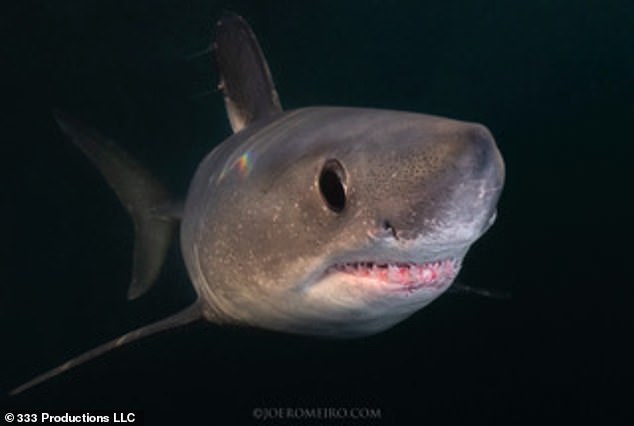 Rare footage of ‘phantom’ sharks, formally known as porbeagle, shows a group swimming off the coast of Rhode Island and Massachusetts

The porbeagle shark is named for its ‘porpoise’ shape and for its ‘beagle’-like hunting prowess, this little-known deep-water predator is often mistaken for its close relatives, the Great White and Mako sharks.

The breed of shark is not normally harmful to humans, although they can cause serious injury – but no deaths have ever been recorded.

‘There are very few photos or film footage of free-swimming porbeagle sharks anywhere in the world,’ Joe said in a statement. 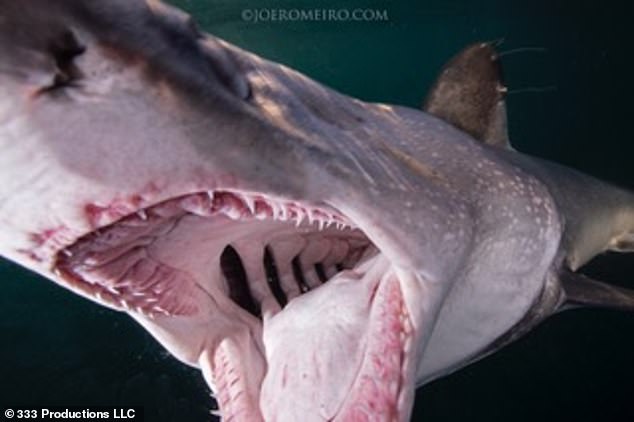 These sharks are rarely seen because they prefer deep, cold water, but a husband and wife duo were able to capture these one of a kind images 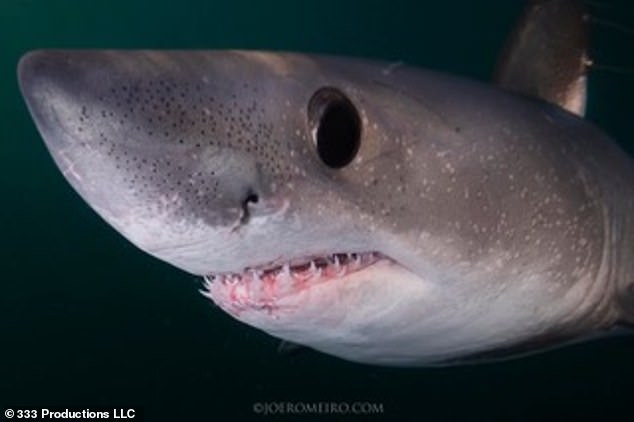 The team spent hours in the North Atlantic waiting for a chance to see a porbeagle, which appeared before the sun came up

‘We were out at night on our research vessel to capture what few have ever witnessed, hoping for just one porbeagle but then we saw five interacting with each other. It was the motherload.’

This shark is only one of five shark species (there are about 500) that is able to warm its body, which allows it to dominate the Northern Atlantic waters during the winter when others flee south to escape the cold.

Recent footage captured by the Romeiros shows two porbeagles challenging each other and three others appear shortly after.

‘Were they there to mate or was this their hunting ground? Whatever the reason, they were all very aware of each other,’ Lauren said.

‘We want to better understand their movements, behaviors and social interactions.

‘This encounter not only helps add to our knowledge of this rare species of shark, it helps us gain the data needed to further their protection from endangerment.’

The video shows the team patiently waiting for the first porbeagle to appear, which they are hoping to entice with bait attached to long ropes.

Then, for what seemed like hours, a shark appears from the dark waters and snags the bait.

‘Traditionally sharks have only been studied through methods that involve capturing a few individuals. It does not provide a true and full picture of the behavior of the whole population such as where they are spending their time and why, because the method can alter their natural behavior,’ said Lauren.

‘Our research technique allows us to observe many different animals at one time as well as at different life stages, showing that we don’t need to rely on catching animals for data.’

Ray Breton, 53, was fishing alone on his 16-foot-long boat off the Isle of Wight when the huge Porbeagle Shark – which is related to the Great White – went for his mackerel bait. 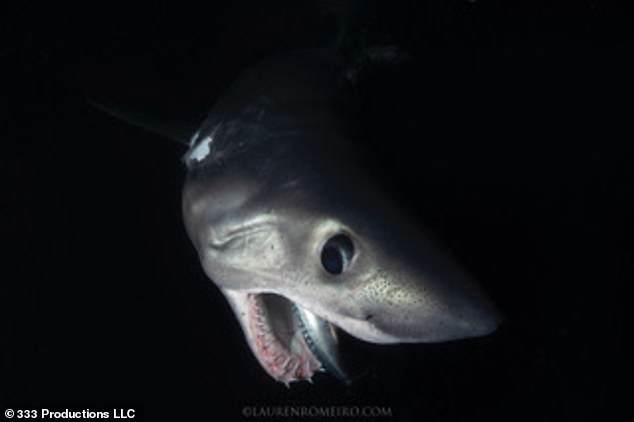 The team attached bait to a line in order to entice the sharks. Here is one eating the bait 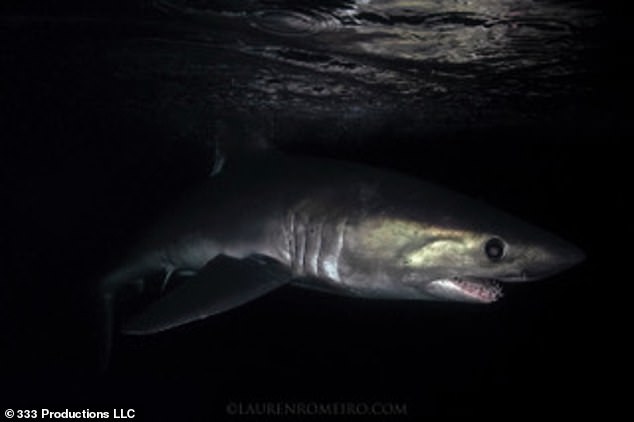 The breed of shark is not normally harmful to humans, although they can cause serious injury – but no deaths have ever been recorded

The angler started to reel in the seven-foot-long ‘angry’ shark, but the catch was so big that it took him an hour to get it alongside his boat.

He is then drags the fishing line in with his hands, bringing the huge shark along side the boat so he could measure it.

The 300-pound beast thrashes and rolls in the water while it Ray tries to keep is steady next to the boat.

The seven-foot-long fish was far too big to pull aboard, so Ray unhooked the shark and released it afterwards.