A radio signal from a galaxy almost 9billion light-years away from Earth has been captured by scientists.

Researchers in Canada and India were able to capture the signal from the galaxy named ‘SDSSJ0826+5630’, with the help of a giant telescope in India.

The radio wave could allow astronomers to peer back into the past and understand the early universe – which is thought to be around 13.7billion years old.

‘It’s the equivalent to a look-back in time of 8.8 billion years,’ Arnab Chakraborty, a cosmologist and co-author of the study on the wave detection told The Metro. 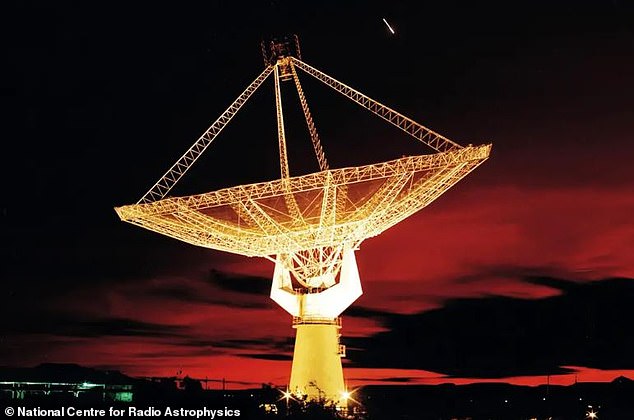 Scientists in Montreal and India were able to capture the signal from the galaxy with the help of a giant telescope near Pune, Maharashtra, India 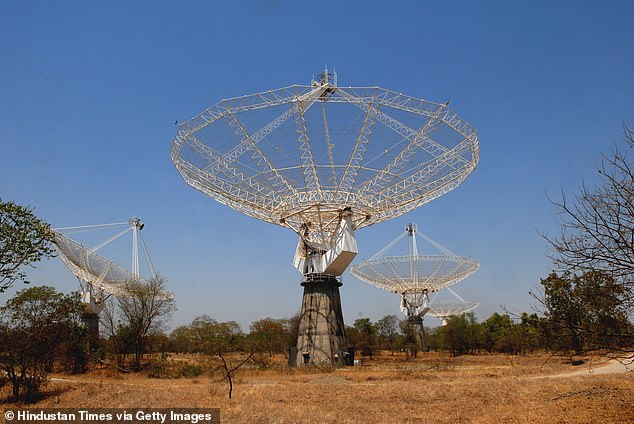 The signal was not sent by aliens – before you jump to any conclusions – but instead came from the star-forming galaxy emitted when the universe was just 4.9billion years old.

This is the first radio signal detection of its kind from such a massive distance away.

‘A galaxy emits different kinds of radio signals, Chakraborty told The Metro. ‘Until now, it’s only been possible to capture this particular signal from a galaxy nearby, limiting our knowledge to those galaxies closer to Earth.’

The Royal Astronomical Society announced the groundbreaking revelation in their monthly notices.

The wave detection was a particularly crucial discovery as the frequency was at a specific wave length known as the ’21cm line’. This is also known as the hydrogen line and is the electromagnetic radiation spectral line with a frequency of 1420.

Hydrogen is spread out across space and can help map out galaxies. The 21cm line is used to do this.

The giant telescope in India was able to pick up the faint signal due to gravitational lensing. This is a naturally occurring phenomenon 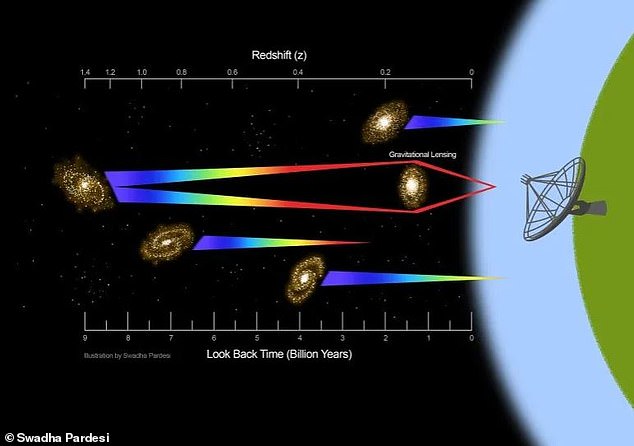 Illustration showing how the signal was detected from the galaxy 9billion light-years away. Another galaxy bent the radio signal which allowed the India telescope to pick it up

Co-author of the study explained to The Metro that gravitational lensing was a naturally occurring phenomenon that ‘magnifies the signal coming from a distant object to help us peer into the early universe’.

Another galaxy bent the radio signal emitted from ‘SDSSJ0826+5630’, which then magnified the wave and allowed the telescope in India to pick it up.

Researchers have used the detection to measure the atomic mass content of the galaxy. Scientists discovered that this particular galaxy is almost twice the mass of the stars visible to us from Earth.