Queen Elizabeth’s message to the Apollo 11 crew is etched on silicon disc left on the lunar surface: Praised mission as a ‘salute to the skill and courage’ of Neil Armstrong and other astronauts

Queen Elizabeth was one of 73 world leaders whose message to NASA’s Apollo 11 is etched onto a silicon disc and left on the moon in 1969 after the crew members became the first humans to walk on the lunar surface.

The Queen died at the age of 96 on September 8, but her salute to the ‘skill and courage’ of the space faring heroes ‘on behalf of the British people’ will forever stay on the moon.

Along with sending a message with Neil Armstrong, Buzz Aldrin and Michael Collins, she also met with them at Buckingham Palace three months after the team returned home from their epic journey to the moon.

The Queen is known for her longstanding presence in humanity’s journey to space and NASA shared its condolences on Twitter within hours of the Queen’s death, tweeting: ‘Queen Elizabeth II’s reign spanned all of spaceflight, predating both Sputnik and Explorer 1.

‘As we join the planet in marking her passing, we are moved by the curiosity Her Royal Highness showed our explorers over the years.’ 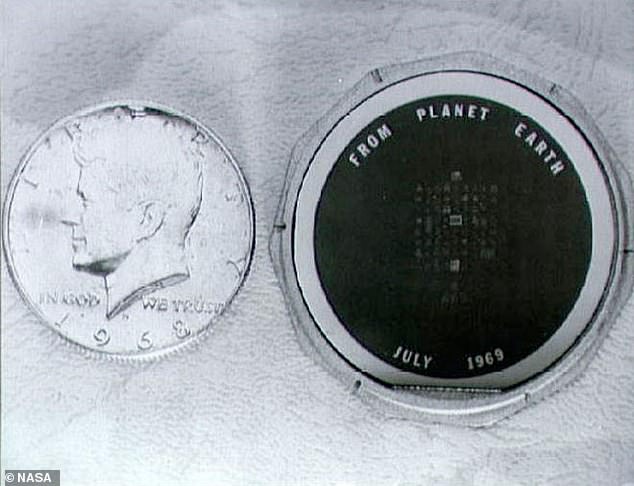 The Queen’s message, and all the others’, were etched on a small disc. They were reduced to the a size that is 200 times smaller than a needle head – each one appears as a dot

The disc is about the size of a 50-cent coin and is made of a non-metallic chemical element found in nature and is used widely in electronics, according to NASA’s press release published on July 11, 1969 – nine days before Apollo 11 touched down on the moon.

The Queen’s full message reads: ‘On behalf of the British people I salute the skill and courage which have brought man to the moon. May this endeavor increase the knowledge and well-being of mankind.

Her message and 72 others were reduced 200 times smaller than the head of a pin before they were etched on the gray-colored disc – and each message appears as a dot.

There are messages from President Eisenhower, Kennedy, Johnson and Nixon. 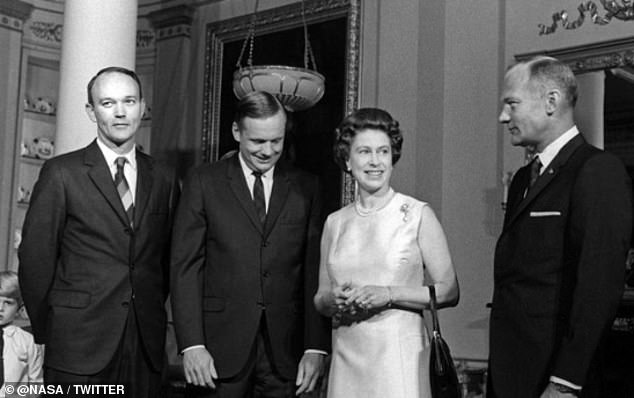 Along with sending a message with Neil Armstrong (second from left), Buzz Aldrin (right) and Michael Collins (left), she also met with them at Buckingham Palace three months after the team returned home from their epic journey to the moon

Buzz Aldrin is the last living member of Apollo 11. He shared a tweet on Thursday expressing his condolences for the Queen’s death

At the top of the disc is the inscription: ‘Goodwill messages from around the world brought to the Moon by the astronauts of Apollo 11.’ Around the rim is the statement: ‘From Planet ‘ Earth — July 1969.

‘The messages from foreign leaders congratulate the United States and its astronauts and also express hope for peace to all nations of the world,’ the NASA press release reads.

‘Some are handwritten, others typed and many are in native language. A highly decorative message from the Vatican is signed by Pope Paul.’

The Queen has had a great interest in humanity’s journey to the final frontier, as she met Soviet cosmonaut Yuri Gagarin on July 14, 1961 after he made history as the first person to visit space.

Aldrin, who is the last living member of Apollo 11 tweeted his condolences Thursday: ‘God bless #QueenElizabeth, a gracious leader, lady, and our host on return from the moon. On behalf of the Apollo 11 crew, Godspeed and God bless the Royal Family. Sincere condolences.’

In 2007, the Queen, along with Prince Philip, took a tour of NASA’s Goddard Space Flight Center where they greeted astronauts who were aboard on the International Space Station. 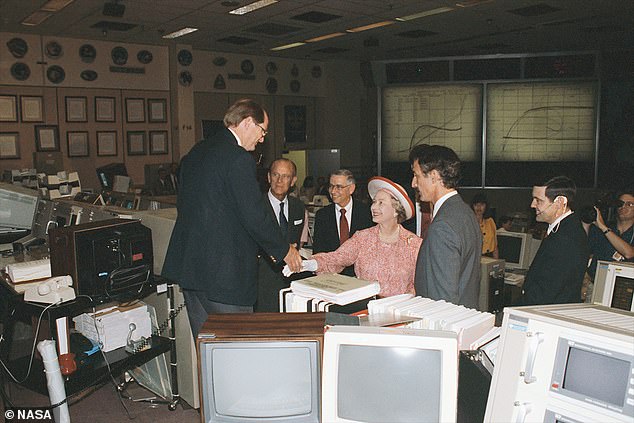 In 2007, the Queen, along with Prince Philip, took a tour of NASA’s Goddard Space Flight Center where they greeted astronauts who were aboard on the International Space Station 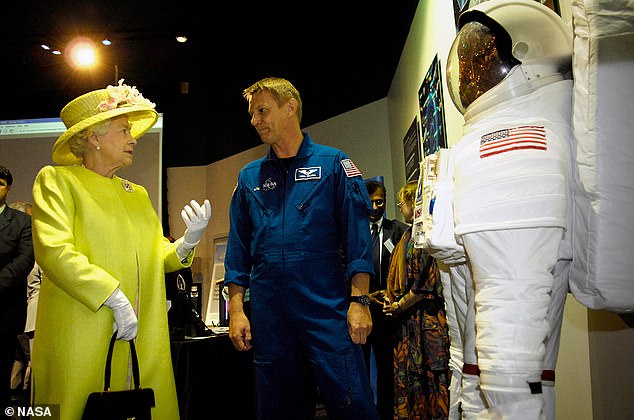 Tim Peake, an astronaut for thetEuropean Space Agency, gifted the Queen the British flag he wore on his spacesuit while performing a spacewalk outside the station when he returned home from space in 2016

She is also quoted for saying: ‘I have travelled widely, but I hope I will be forgiven for having limited my tour to the Earth’s surface,’ which was stated while she was at the National Space Center in Leicester, England.

Tim Peake, the United Kingdom’s first European Space Agency (ESA) astronaut, also met with the Queen who sent him a message in 2015, the night before his first launch into space.

‘Prince Philip and I are pleased to transmit our best wishes to Major Timothy Peake as he joins the International Space Station in orbit,’ she wrote. ‘We hope that Major Peake’s work on the Space Station will serve as an inspiration to a new generation of scientists and engineers.’

When Peake returned to Earth in 2016 he gifted the Queen the British flag he wore on his spacesuit while performing a spacewalk outside the station.

‘A remarkable woman. Thank you Ma’am for a lifetime of service and dedication,’ Peake wrote on Thursday. ‘A sad day and our thoughts are with the Royal Family.’