The trick to making cafe diners eat less meat: Place the veggie options at least six feet in front of the meaty ones

Canteens should place veggie options six feet closer to diners than the meaty dishes if they want to reduce the planet’s unsustainable desire for meat, a study reveals.

In university college canteens, UK researchers found sales of plant-based dishes shot up by up to 40 per cent when they were closer to the diners on entry.

Diners may be just be happy with ‘the first bite within eyeshot’ and be subconsciously put of by the additional effort required to seek out meat.

The experts are investigating ways of ‘nudging’ people towards eating more plant-based food and less meat.

This will help curb the environmental damage caused by excessive consumption of animal products, which contributes to deforestation and global warming. 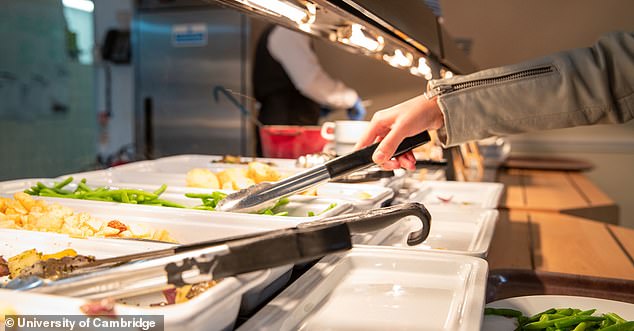 ‘Reducing meat and dairy consumption is one of the simplest and most impactful choices we can make to protect the climate, environment and other species,’ said study lead author Emma Garnett at the University of Cambridge’s Department of Zoology.

‘We’ve got to make better choices easier for people.

‘We hope to see these findings used by catering managers and indeed anyone interested in cafeteria and menu design that promotes more climate friendly diets.’

The researchers experimented on customers in the cafeterias of two Cambridge colleges to find out whether the position of vegetarian options influences the uptake of plant-based dining.

At the two canteens, college members take a tray, view the meals on offer and then ask serving staff to dish up their preferred options.

The food options ranged from Caribbean chicken with rice and mango to polenta and Parmesan fritters with apple relish.

‘Sandwiches and salads went uncounted’, the team disclosed, while participant data and names of the particular colleges were anonymised.

While the catering managers helped to set the experiments up, the diners remained unaware.

Researchers collected and analysed data from 105,143 meal selections over the course of two academic years, between spring 2017 and summer 2018.

The team alternated the placement of meat and veg dishes every week and then changed the pattern to every month. 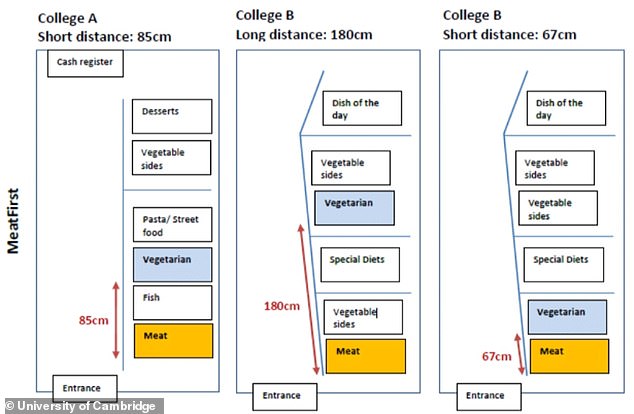 Layout of the canteens used in experiments. This arrangement shows the ‘Meat First’ days – when the meat is closer to the diner on entry than the veg option. In later parts of the experiment, the distance was changed to just 2.1 feet (67cm) in College B

Simply placing veggie before meat in the order of meal options as people entered the serving area did little to boost green eating in College B, the team found.

A preference for the veggie dish depended on rather a fine margin between the two options.

The researchers had expected to see a difference in vegetarian sales through the  order they were placed in relation to the customer alone.

But it was only in College B with the extra 3.2-foot gap between food options that recorded an uptick when arranged ‘Veg First’ 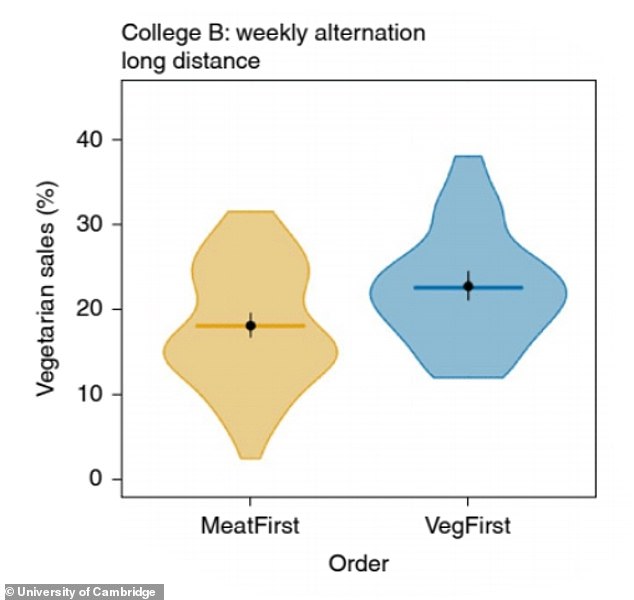 To confirm the findings, researchers reduced the gap in this cafeteria to just 2.1 feet (67cm) to find the vegetarian food sales fell sharply.

With a 2.1-foot gap, even when placed first in line ahead of the meat dishes (on the ‘Veg First’ days) veggie sales almost 30 per cent compared to Meat First days.

Garnett said the effect of an extra six feet may be down to ‘additional effort’ required to seek out meat.

In other words, tapping into people’s laziness could help cut the meat demand.

‘If the first bite is with the eye, then many people seem perfectly happy with an appetising veggie option when meat is harder to spot,’ said Garnett.

‘All cafeterias and restaurants have a design that “nudges” people towards something. 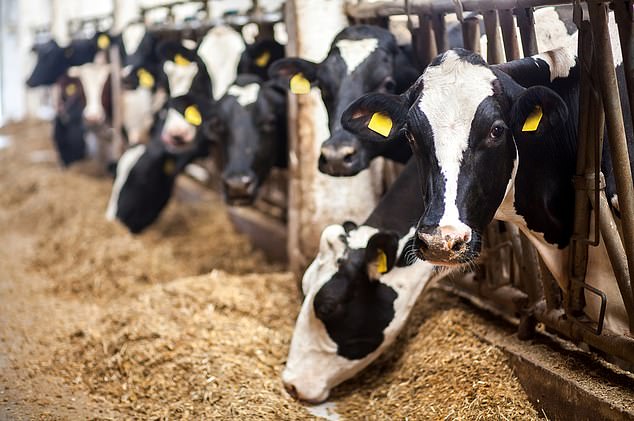 Meat-heavy diets not only risk our health but that of the planet, as livestock farming on a massive scale destroys habitats and generates greenhouse gases

‘So it is sensible to use designs that make the healthiest and most sustainable food options the easiest to pick without thinking about it.’

This research alone, however, is generally not enough to change the incredible demand for meat.

Livestock and aquacultures behind meat, fish, dairy and eggs are responsible for some 58 per cent of the greenhouse gas created by global food.

They also take up 83 per cent of farmland despite contributing to just 18 per cent of the world’s calorie intake.

Earlier this year, the UK’s public sector caterers pledged to cut the amount of meat used in schools and hospitals by 20 per cent.

‘More research is needed on how to set up our society so that the self-interested default decision is the best one for the climate,’ she said.

Garnett’s research has contributed to food policy at the University of Cambridge, where the catering service has worked to reduce the amount of meat it uses.

Meanwhile, the University Catering Service (UCS), which is responsible for 14 outlets across the University of Cambridge, earlier this year announced a 33 per cent reduction in carbon emissions per kilogram of food purchased.

The new study has been published in the journal Nature Food.

HOW DOES EATING MEAT AND DAIRY HURT THE PLANET?

Eating meat, eggs and dairy products hurts the environment in a number of different ways.

Cows, pigs and other farm animals release huge amounts of methane into the atmosphere. While there is less methane in the atmosphere than other greenhouse gases, it is around 25 times more effective than carbon dioxide at trapping heat.

Raising livestock also means converting forests into agricultural land, meaning CO2-absorbing trees are being cut down, further adding to climate change. More trees are cut down to convert land for crop growing, as around a third of all grain produced in the world is used to feed animals raised for human consumption.

As well as this, the nitrogen-based fertiliser used on crops adds to nitrous oxide emissions. Nitrous oxide is around 300 times more effective at trapping heat in the atmosphere. These fertilisers can also end up in rivers, further adding to pollution.