Potentially hazardous’ asteroid the size of a BLUE WHALE will zip past Earth tomorrow at dizzying speeds of 20,512 mph, NASA reveals

A ‘potentially hazardous’ asteroid the size of a blue whale, the largest animal on the planet, will zip past Earth tomorrow, NASA says.

Despite being more than 10 times further out than the moon, the asteroid is classed as a near Earth object (NEO) and is being tracked by the space agency. 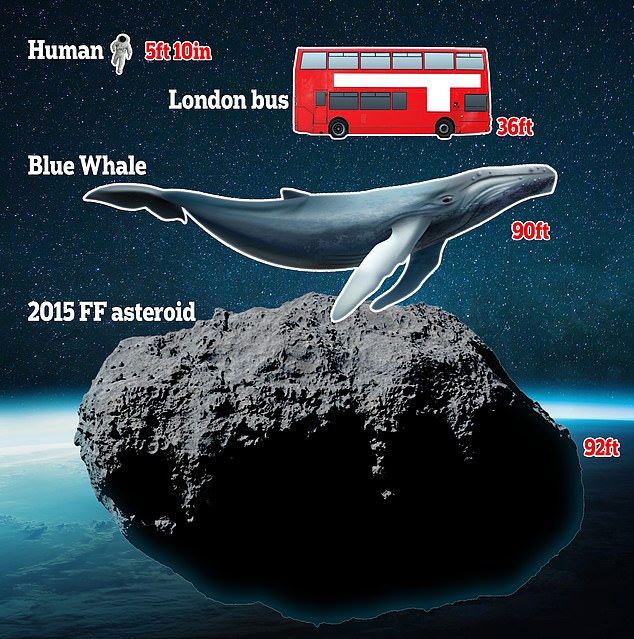 Although 2015 FF – which can be tracked on NASA’s website – is at a distance of 2.6 million miles away, this is relatively close in astronomical terms.

For this reason, 2015 FF is defined by NEO, although it’s not expected to do damage.

At 92 feet at its very maximum, 2015 FF is actually puny compared to the largest known asteroid, Ceres, which is 580 miles in diameter (more than 3 million feet).

According to publicly available NASA data, there have been 29,385 NEOs discovered, as of Monday.

In an attempt to tackle the threat of asteroids that may one day get a little too close for comfort, NASA formed a planetary defence program, that includes the Double Asteroid Redirection Test (DART) mission, that launched in November last year.

DART was launched on a SpaceX Falcon 9 rocket and will see the probe deliberately crash head first into the surface of an asteroid in October this year.

Then, using Earth-based telescopes to measure the effects of the impact on the asteroid system, the mission will enhance modelling and predictive capabilities to help better prepare for an actual asteroid threat should one ever be discovered.