Safe alternative to pesticides? Scientists develop a polymer coating for plants that controls harmful fungi without making them toxic

A new polymer coating could serve as a safer alternative to pesticides in controlling harmful fungi that devastate plant crops.

UK scientists used a coating of (meth)acrylate polymer, which is normally used to make acrylic plastics, to block fungi from attaching to surfaces.

The coating, which was shown to be effective on plants, averts the the need for expensive chemical fungicides, to which fungi are increasingly becoming resistant.

The polymer layer can be administered as both a spray for crops without rendering them inedible, or alternatively 3D-printed into solid form for medical applications.

The polymer mix doesn’t kill fungi such as yeast and moulds, but ‘passively blocks’ their attachment to surfaces to make them safe. 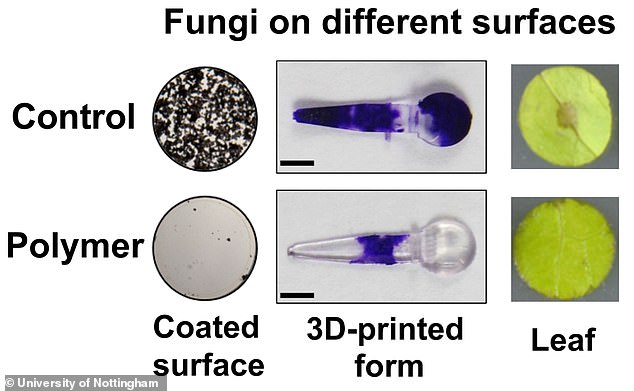 Image shows the comparison between surfaces not using the polymer coating (top) and those that are (bottom). Fungal staining shows the difference between an object 3D-printed with the polymer (middle). Far right shows the presence of fungal spores on a leaf without the spray

‘This is the first high-throughput study of polymer chemistries resisting fungal attachment,’ said Professor Simon Avery from the School of Life Sciences at the University of Nottingham.

The three-domain system divides cellular life forms into either archaea, bacteria, and eukaryote.

Archaea: Single-celled organisms that lack cell nuclei, considered some of the oldest species of organisms on Earth.

Bacteria: Biological cells that inhabit soil, water, acidic hot springs, radioactive waste and more. Many species reside in the human gut and are beneficial; others are pathogenic.

Eukarya: Organisms with a nucelus in their cells. Includes animals, fungi and plants.

‘Our engagement to date with industry has highlighted a clear need for a new approach to control fungi and the major socioeconomic problems that they cause, as the value of existing strategies using bioactives – antifungals, fungicides – is eroded by growing resistance and regulations.

‘This passive, anti-attachment technology that we have been developing addresses this need.

‘We have been able to show that different polymers are effective in resisting diverse fungi that have broad socio-economic impacts.’

Fungi, which come under the eukaryote classification along with plants, animals and insects, cause diverse, serious societal and economic problems.

This has spawned an industry for fungicides – anti-fugal chemical chemical compounds or biological organisms used to kill parasitic fungi or their spores – that’s worth around $30 billion (£23 billion) globally.

As well as often being expensive to develop and market, fungicides are subject to tight regulations regarding their use.

What’s more, just like bacteria and viruses, fungi develop ‘anti-microbial resistance’ – they adapt to human-made substances designed to kill them in a bid to survive. 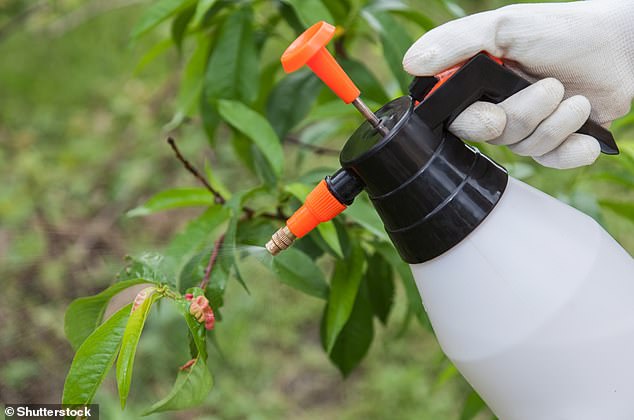 Spraying of peach fruit tree with fungicides. There are tight regulations around the use of fungicides and anti-fungals and there is also growing resistance of fungi to these agents

Consequently, potential chemical-free technologies for combatting fungi – ones that don’t give fungi change to adapt – are ‘highly attractive to the industry’, the University of Nottingham said.

WHAT IS A POLYMER?

A polymer is a substance with a molecular structure built up from a large number of similar units bonded together.

It is a useful chemical made of many repeating units.

A polymer can be a three, two or one-dimensional network, each repeating unit is the ‘-mer’ or basic unit with ‘poly-mer’ meaning many repeating units.

Repeating units are often made of carbon and hydrogen and sometimes oxygen, nitrogen, sulfur, chlorine, fluorine, phosphorous, and silicon.

To make the chain, many links or ‘-mers’ are chemically hooked or polymerized together.

Polymers occur in nature and can be made to serve specific needs.

Manufactured polymers, such as plastics, can be three-dimensional networks that do not melt once formed.

Based on previous research, Professor Avery and his team identified polymers that resist the attachment of different kinds of fungi, including pathogens.

They screened hundreds of (meth)acrylate polymers, identifying several that reduce attachment of the human pathogen candida albicans, the crop pathogen botrytis cinerea and other fungi.

Candida albicans, for example, is a pathogenic yeast that is found in somewhere between 40 to 60 per cent of healthy adults.

However, it can become pathogenic in individuals receiving steroids or antibiotics for diseases such as HIV.

Human pathogens such as candida albicans form biofilms – a slimy layer made from a community of microbes – including on biomedical devices.

But 3D-printed versions of medical equipment made from the polymer mix could put a stop to the fungi in hospitals.

‘The 3D printing offers an alternative to coating, depending on the application,’ Professor Avery said.

‘Indwelling medical devices could in principle be 3D printed from one of the lead polymers that works against the human pathogen candida albicans.

A similar approach against bacterial pathogens is also now being developed for a catheter coating to prevent infections in patients. 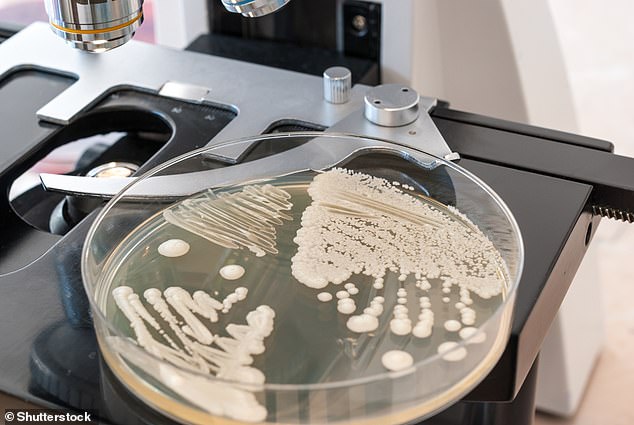 Petri dish with candida albicans fungus – a pathogenic yeast that is found in somewhere between 40 to 60 per cent of healthy adults. However, it can become pathogenic in individuals receiving steroids or antibiotics for diseases such as HIV. Medical devices printed with the polymer can passively block such fungi

As a spray for plants, meanwhile, a thin layer of the polymer can protect leaf surfaces, including edible crops for human consumption, without showing any detrimental effect to the plant.

In experiments, the polymer groups used were associated with weak fungal attachment.

Rather than killing the fungi, simply blocking their attachment in a passive way is sufficient to prevent most of the problems that fungi cause, according to Professor Avery.

This is an alternative to the ‘killing affect’ of fungicides that makes fungus develop resistance, with no toxicity.

The research has been published in the journal Science Advances.

Anti-fungal drugs treat fungal infections by killing or stopping the growth of dangerous fungi in the body.

Fungi, like bacteria, can develop antibiotic resistance, when germs like bacteria and fungi develop the ability to defeat the drugs designed to kill them.

Some types of fungi, like Candida auris – a yeast that causes the infection Candidiasis, commonly known as thrush – can become resistant to all three drug types.

Resistance is especially concerning for patients with invasive fungal infections – severe infections that affect the blood, heart, brain, eyes, or other parts of the body.

In other cases, resistance can also develop over time when fungi are exposed to these drugs.

The Centers for Disease Control and Prevention in the US calls anti-fungal resistance ‘a growing threat’.

Further study is needed about links between anti-fungal-resistant infections and agricultural fungicide use on crops, it claims.