DNA of pollen produced by common varieties of grass is being studied by scientists hoping to alleviate hay fever symptoms.

Around one in five Britons suffer with hay fever, plagued by constant sneezing, sniffling and watering eyes throughout the summer months.

Now, a team of scientists at Bangor University are sampling 40 common species of grass — including cocksfoot, Timothy and meadow foxtail — to find which specific types cause the reaction. 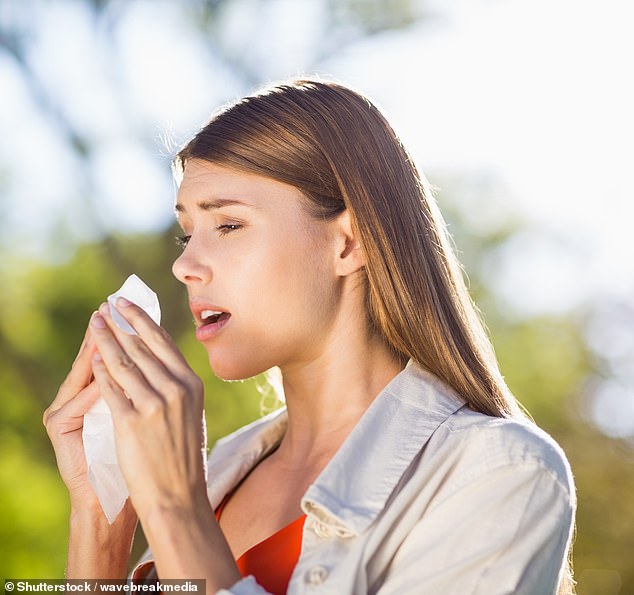 Around one in five Britons suffers with hay fever, plagued by constant sneezing, sniffing and watering eyes throughout the summer months. Scientists are studying pollen DNA to find which strains cause the seasonal affliction (stock)

The team believes only a few varieties of grass trigger hay fever, which may explain why people suffer severe symptoms on days when the pollen count is low.

However, on these days, although overall pollen levels are low, the relative amount of specific pollens may be high.

Professor Simon Creer, a hay fever sufferer who is leading the research, hopes their work will lead to more precise grass-by-grass pollen counts.

‘It could even extend to making recommendations to turf manufacturers and grass seed producers as to which species of grass are not as strongly associated with hay fever symptoms,’ he said.

‘That could mean that developers could avoid them when building new schools, hospitals or housing estates.

‘We know that hay fever costs hundreds of millions of pounds in days off work and depression and it’s not helpful to students doing exams in June either.’

Hay fever is a complex affliction, with some people affected by certain pollens and not others.

Some people are immune to grass pollen, but get itchy eyes and start sneezing due to tree pollen, something Professor Creer says is common in Scandinavia.

The Wales-based researchers partnered with the Met Office and deployed pollen collection traps across the UK in recent years.

This, they hope. will tell them what specific types of pollen are common in the air at specific times.

By comparing this to data from hay fever sufferers attending their GP surgery or even hospital, they can understand what pollen strains affect people the most.

Telling pollen from one plant apart from another is extremely difficult as they are identical to look at, even under a microscope. That is why genetic analysis to read the DNA, is required.

Professor Creer said: ‘We already see weather forecasts at this time of year stating whether pollen levels are low, medium or high but in future we will be able to complement that information by identifying the different kinds of pollen that are around.

‘If we can identify the species of grass that are contributing more to the allergenic load then that informs us that we can try and avoid those species whenever possible.

‘If we see a spike in a particular kind of pollen at the same time that hay fever is increasing you can work out where the hot spots are and which pollen is in that area.’

How to fight off hay fever symptoms

Dr Ellie Cannon for The Mail on Sunday

Tackling hay fever symptoms does not start and end with antihistamine tablets – they are just one of a vast number of treatments, both medical and non-medical, that are worth trying.

If you were to check NHS medical guidelines for the treatment of hay fever, you’d find the first thing  to try is not even a drug but nasal rinsing, which is cheap and easy.

Nasal rinses are squeezy bottles of ready-made saline that you stick up a nostril and squirt, making sure you’re over a sink, which reduces inflammation and congestion and rinses away pollen. They are available online and in pharmacies.

It seems like a faff but actually it isn’t, once you get into a routine (do it in the morning and before bed). It could well be the only treatment you need. It’s also perfect for people who need to avoid medication, for example breastfeeding women.

Antihistamines are popular medications with few downsides, but nobody seems able to use them properly. Firstly, even non-drowsy antihistamines can make people feel tired or hung over and heavy, which is why so many stop taking them.

If this is happening to you, start taking them in the evening or try a different tablet, such as cetirizine, loratadine or acrivastine, which are available from the pharmacy.

Try them each separately for at least a week, and look out for the generic drugs rather than brand names as they are much cheaper and just as effective.

Antihistamines are usually labelled as once-a-day, but you can safely take them twice a day or even three times for better control – as long as drowsiness isn’t a problem.