In a hidden valley on an Indonesian island, there is a cave decorated with what may be the oldest figurative art ever glimpsed by modern eyes.

The vivid depiction of a wild pig, outlined and filled in with mulberry-hued pigment, dates back at least 45,500 years, according to a study published on Wednesday in Science Advances. It was discovered deep inside a cave called Leang Tedongnge in December 2017, during an archaeological survey led by Basran Burhan, a graduate student at Griffith University and co-author of the new research. The animal in the painting resembles the warty pig, a species still living today on the island of Sulawesi where the cave is.

Sulawesi was already considered by some experts to be the site of the earliest known representational cave art in the world. A captivating scene elsewhere on the island, which displays human-animal hybrids, was found to be at least 43,900 years old, reported by the same team in a 2019 study.

These examples of cave art, along with another pig figure spotted at a cave further south by Adhi Agus Oktavhiana, a graduate student at Griffith University and co-author of the study, hint at the rich cultures living on the Indonesian islands. The discoveries also open a debate over whether the artists could have been Homo sapiens, or members of another extinct human species.

The Leang Tedongnge site is only about 40 miles from Makassar, a bustling city of some 1.5 million people. But the cave has remained virtually untouched because it is so challenging to reach.

“Getting to it requires a difficult trek along a rough forest path that winds through mountainous terrain and ends in a narrow cave passage, which is the only entrance to the valley,” said Adam Brumm, also an archaeologist at Griffith University and a co-author of the study. “The valley can only be accessed during the dry season; during the wet season the valley floor is completely flooded and the residents have to travel around on dugout canoes.”

Dr. Brumm credited local scientists and others with making the discovery at the cave site possible.

After discovering the pig painting, the team used uranium-series dating to determine its minimum age, arriving at 45,500 years. But it is possible that the painting itself might be thousands of years older because the technique only assesses the age of a mineral deposit, speleothem, that formed on the cave walls.

The question of who made the paintings is still shrouded in mystery. 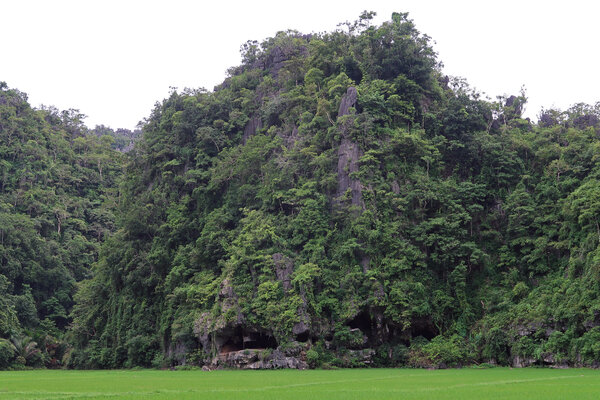 Human skeletal remains as old as 45,500 years have never been found in Sulawesi, so it is not clear that the artists were anatomically modern humans. The islands that are now called Indonesia were inhabited by different hominins — the broader family to which humans belong — over long periods of time. Some of these hominin remains date “to over a million years old,” said Rasmi Shoocongdej, an archaeologist at Silpakorn University in Thailand who was not involved in the study.

Dr. Brumm and his colleagues assume the painters were modern humans, “given the sophistication of this early representational artwork.” Moreover, the ancient paintings share characteristics with prehistoric art made by humans elsewhere in the world, including the presence of handprints and the use of the “twisted perspective,” in which animals are painted both in profile and frontal views.

Dr. Brumm says he believes it is only a matter of time before human remains of this age are found in archaeological digs in the region.

João Zilhão, an archaeologist at the University of Barcelona who was not involved in the study, disagrees with the team’s assumption that modern humans created the paintings. As the co-author of a 2018 study suggesting that Neanderthals left nonfigurative art on the walls of Spanish caves, he thinks another extinct human species may have created the images.

“An anatomically modern human is an anatomical definition,” he said. “It has nothing to do with cognition, intelligence or behavior.”

Dr. Zilhão added, “There is no evidence about the anatomy of the people who did this stuff.”

While it is easy to focus on the claim that these are the oldest prehistoric images yet found from people, Margaret Conkey, a professor emerita at the University of California, Berkeley, said that overshadows the “much broader implications” of the discovery.

What stood out about the study from her perspective was its “important contribution to understanding how humans might be staying in connection with each other” in prehistoric Sulawesi, and “how they are creating social worlds through material and visual manifestations.”

While the new study uses the term “oldest,” Dr. Brumm and his colleagues expect to find images in Sulawesi with even more advanced ages.

“We think there is much older rock art and other evidence for human habitation in Sulawesi and on other islands within the part of eastern Indonesia known as the Wallacean archipelago, the gateway to the continent of Australia,” Dr. Brumm said.

Unfortunately, time is of the essence: Indonesia’s cave art is rapidly deteriorating, which raises the sad prospect that many of the oldest paintings on Earth may fade away before they are rediscovered.

“We have documented this phenomenon at almost every rock art site in the region, and monitoring by our colleagues in the local cultural heritage agency suggests that the exfoliation of the art is occurring at an alarming rate,” Dr. Brumm said. “It is very worrying, and given the current situation the end result is likely to be the eventual destruction of this ice age Indonesian art, perhaps even within our lifetime.”