‘Cruel joke’: Animal rights activists slam Prince of Wales for awarding prize to ‘inhumane’ and ‘medieval-looking’ mask for COWS that neutralises methane in their breath

Animal rights activists have rebuked the Prince of Wales for awarding a prize to an ‘inhumane’ and ‘medieval-looking’ device, designed to neutralise methane in cows’ breath.

The device, developed by UK company ZELP, is a mask that supposedly fits ‘comfortably’ around a cow’s head without restricting its movement or feeding.

As the cow exhales, methane travels through a catalyst where it’s oxidized, then released into the air as CO2 and water vapour instead of harmful greenhouse gas.

It has been named as one of four winners of The Prince of Wales’ inaugural Terra Carta Design Lab, which recognises innovative design solutions to the climate crisis.

However, animal rights organisation PETA argues that this invention doesn’t help cows who suffer every day for the meat and dairy industries, and the real change lies in vegan farming. 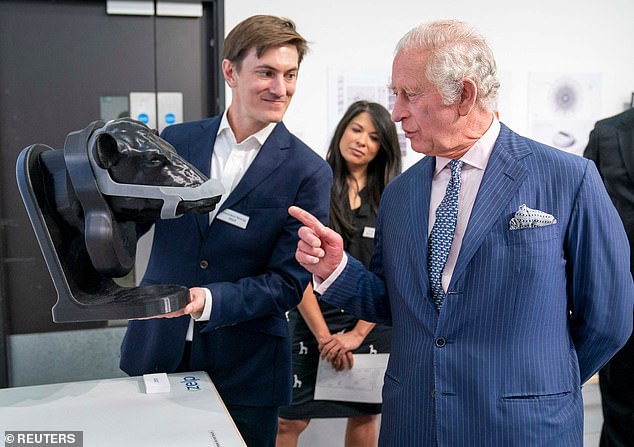 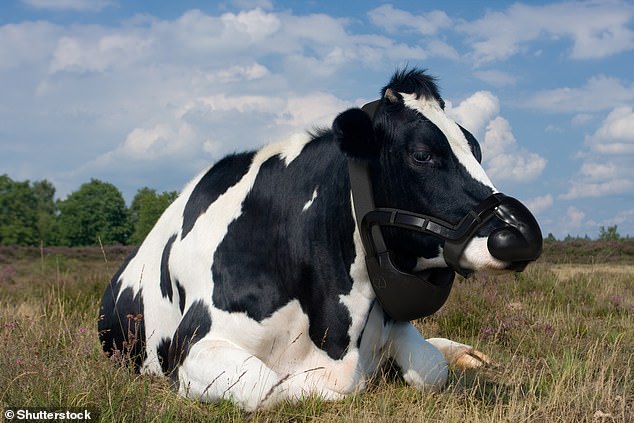 Swapping animal products for future foods such as insect protein or cultured milk could reduce global warming, water and land use by over 80 per cent, a new study suggests.

They found that if people in Europe replaced meat and dairy with foods produced through new technologies, such as making fake steak out of bovine cells, it could significantly reduce all environmental impacts.

Not only that, but it would be nutritionally adequate and meet the constraints for what can be feasibly consumed, according to experts at the University of Helsinki.

‘You might write it off as a cruel joke, but it’s real: forcing cows, who already pay dearly for human tastes, to wear thick plastic face masks,’ PETA Director Elisa Allen told MailOnline.

‘The Prince of Wales should be royally ashamed to give this medieval-looking device an award instead of condemning it with at least the force he reserves for modern architecture.

‘The creators of this inhumane contraption claim it is “comfortable”, but that’s akin to calling meat, eggs, and dairy “gifts to the environment” when they cause it inarguable harm.

‘The last thing our society needs is to inflict more suffering on animals, when what is needed is a rapid retreat from cruel and environmentally damaging animal agriculture.’

She added that research shows consumption of cows, lambs, and pigs needs to drop by 90 per cent to avert the worst effects of the climate catastrophe.

‘Our future king should home in on vegan farming initiatives, which actually help animals, human arteries, and the planet,’ she said.

‘If there ever was a case of the emperor’s new clothes, this is it.’

The Prince of Wales was given a demonstration of the face mask for cattle at the opening of an exhibition showcasing the Terra Carta Design Lab projects yesterday.

He met the device’s inventor Francisco Norris, who explained the how the Zelp – Zero Emissions Livestock Project – fitted comfortably around the animal’s head and does not interfere with its day to day activities.

‘It doesn’t stop them breathing?’ the fascinated prince, himself a farmer and environmentalist, asked.

‘No, it just sits on top,’ Mr Norris explained.

He told Charles research has shown the harness does not affect cows’ breathing or eating, and their milk production, which is tested twice daily, doesn’t slow down either.

Tests also showed the harness ensured a 53 per cent reduction in methane emissions – the company is working on improving its efficiency to 60 per cent next year. 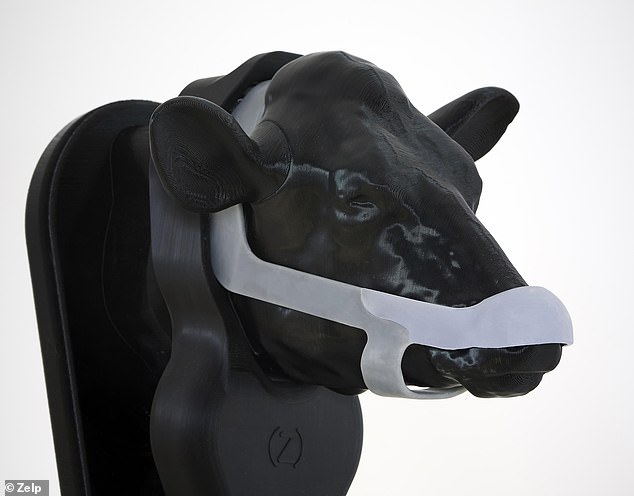 As the cow exhales, methane travels through a catalyst where it’s oxidized, then released into the air as CO2 and water vapour instead of harmful greenhouse gas

‘And it reduced the methane produced by their belching,’ Charles marvelled ‘Fascinating.’

Zelp says around 95 per cent of the methane from cattle is expelled via exhalations and belching of cows – not flatulence, as is commonly believed.

Mr Norris told Charles commercial production is due to begin in 2023.

The ZELP mask was one of four winning designs by students and alumni of the Royal College of Art who took part in the Terra Carta Design Lab competition. 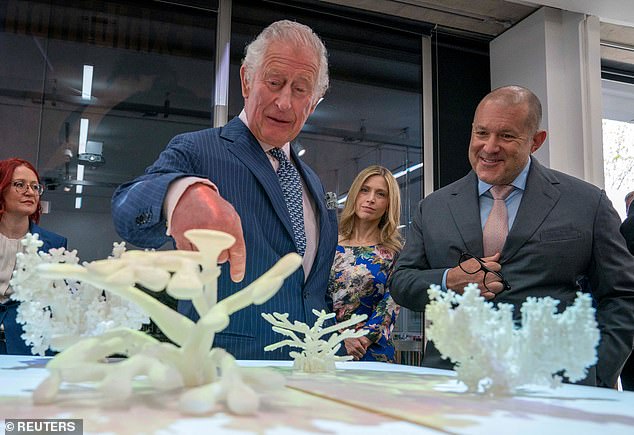 The mask was one of four winning designs by students and alumni of the Royal College of Art who took part in a competition held at the Terra Carta Design Lab. The prince toured the exhibition in London showcasing 20 finalists.

The Lab was founded by Prince Charles and RCA chancellor Sir Jony Ive.

Other winners  include a device that captures rubber particles shed by car tyres,  aerodynamic nutrient and seed pods made from food waste, and ‘the first 100 per cent recyclable and chemical-free outdoor performance textile’.

Each winner received £50k funding and mentoring from Sir Jony Ive, who was formerly chief design officer at Apple, and the corporate members of the prince’s SMI network.

‘I can’t tell you how proud I am to be associated with the Royal College of Art, particularly as a result of seeing the remarkable ideas presented by many of them alumni and existing students,’ the prince said in an off the cuff speech.

‘May I say that it is critical because of the urgency we face in terms of the crisis confronting us in all directions and just how important is what their ideas represent in terms of finding solutions rapidly.

‘I can only hope as a result of this and drawing a bit more attention to what you are doing that we will have a better chance of winning this battle in shorter time. I can only wish you every possible success.’

THE ENVIRONMENTAL IMPACT OF FARMING COWS

The livestock animals are notorious for creating large amounts of methane, which is a major contributor to global warming.