People who use emojis in text messages have more SEX and go on more dates than those who don’t, study claims

Using emojis in text messages can enhance the odds of relationship and sexual success, a scientific study has found.

Researchers at The Kinsey Institute conducted two separate studies on the graphic icons to see the impact they had on people’s lives.

They surveyed more than 5,000 participants for the annual Singles In America paper, then followed it up with a second analysis of 275 adults.

Together, they showed a direct correlation between emojis and sex.

Specifically, that those who punctuate their messages with the images are more likely to have second dates, kiss their suitors and have a higher number off sexual partners. 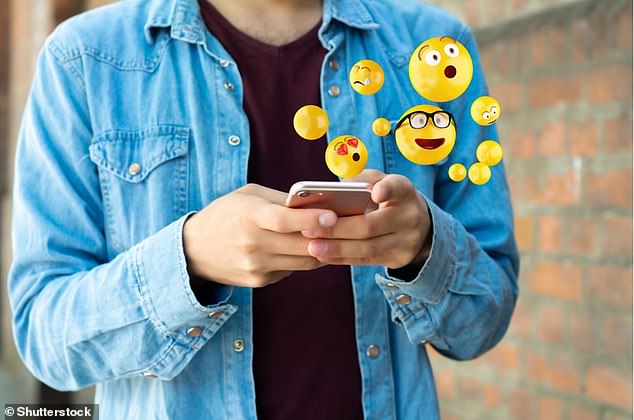 Analysis: They surveyed more than 5,000 participants for the annual Singles In America paper, then followed it up with a second analysis of 275 adults

HOW OFTEN DO WE USE EMOJIS?

According to the study, 38 per cent of people never use them, while 29 per cent employ them occasionally.

In contrast, 28 per cent of single people use them regularly.

‘We find that the use of emojis allows daters to communicate important affective information to potential partners which facilitates successful intimate connection and more romantic and sexual opportunities.’

According to the results, 38 per cent of people never use emojis, while 29 per cent employ them occasionally.

In contrast, 28 per cent of single people use them regularly.

Unfortunately, the researchers didn’t specify which emojis were used. Nor did they investigate whether there’s an ideal ratio of emojis to be used per-message.

‘[W]e cannot fully know which emojis are most effective at helping to form connections between people,’ they added.

Details of the study were published in PLOS ONE.