Men fed up with the old adage that they are unable to multitask can take solace from a recent piece of research which found the ability can be improved with practise.

Scientists found people improve thanks to improved information transfer between a round structure within the brain called the putamen and the organ’s outer regions.

Australian neuroscientists compared the brain activity of 100 healthy adults before and after a week of practising two tasks at once.

MRI scans showed improved information transfer between the putamen and the two outer regions, known as the IPS and the pre-SMA. 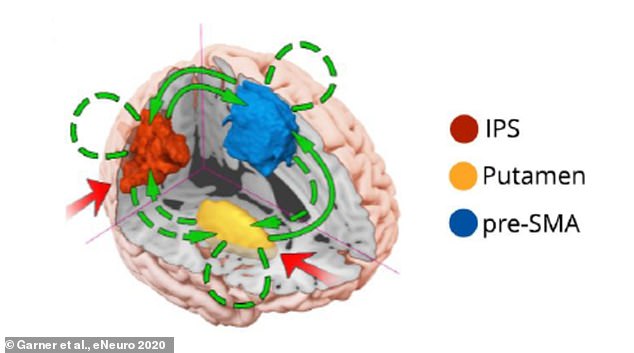 Information transfer in the brain during multitasking, between the putamen and two cortical regions – the pre-supplementary motor area (pre-SMA) and the intraparietal sulcus (IPS)

‘Humans show striking limitations in information processing when multitasking, yet can modify these limits with practice,’ said the study authors from the University of Queensland, Australia.

‘Our results support the view that multitasking stems at least in part from taxation in information sharing between the putamen and pre-supplementary motor area.

‘Moreover, we propose that modulations to information transfer between these two regions leads to practice-induced improvements in multitasking.’

It’s a common belief that trying to do two activities at once leads to failure, especially for men.

This is because multitasking requires outer cortical brain regions to rapidly communicate with each other.

But multitasking also depends on the striatum, a previously overlooked region deep inside the brain.

Specifically, the putamen – a round and relatively large brain region in the striatum – exchanges information with the outer or ‘cortical’ regions.

The main function of the putamen is to regulate movements and influence various types of learning.

The speed of this information exchange that allows this to happen limits multitasking capability yet, the team found, can improve with practice.

The researchers compared the brain activity of 100 healthy adults before and after a week of multitasking practice.

The participants completed two different tasks, first separately and then at the same time.

For one task, participants were presented with one of two white shapes that were distinguishable in terms of their smooth or spikey texture, presented on a black screen.

Participants pressed one of two buttons when the they saw the smooth or spiky shape on the screen.

For the other task, participants responded to one of two different electronic sounds using the index or middle finger of their other hand.

The ‘complex’ range of sounds were selected to be easily distinguishable from one another.

The study participants were instructed to respond as accurately and quickly as possible to all tasks.

After 18 rounds of the tasks, participants became quicker at pressing the buttons when multi-tasking.

The experts also used functional magnetic resonance imaging (fMRI) on the participants when they were doing the tasks, which measures brain activity by detecting changes associated with blood flow.

fMRI scans revealed the putamen and two cortical regions – the the pre-supplementary motor area and the intraparietal sulcus – were activated by the tasks separately and increased activity during multitasking.

After testing a variety of potential models, the research team found that multitasking ability hinged on how effectively the putamen could exchange information with the cortical areas.

A week of practice improved the participant’s task performance in concert with an increase in communication rates between the putamen and the cortex.

The team conclude that multitasking limits may be adjusted by changes in the rate of information transfer.

‘The interface between the putamen and key cortical nodes appear to correspond to multitasking operations, and the modulation of multitasking limitations,’ they say in eNeuro.

How fMRI scans track what happens in the human brain

Functional magnetic resonance imaging (fMRI) is one of the most recently developed forms of neuroimaging.

It measures the metabolic changes that occur within the brain, such as changes in blood flow.

Medical professionals may use fMRI to detect abnormalities within the brain that cannot be found with other imaging techniques, measure the effects of stroke or disease, or guide brain treatment.

It can also be used to examine the brain’s anatomy and determine which parts of the brain are handling critical functions.

A magnetic resonance imaging (MRI) scan uses a magnetic field rather than X-rays to take pictures of body.

The MRI scanner is a hollow machine with a tube running horizontally through its middle.

You lie on a bed that slides into the tube of the scanner.

Equipment used in fMRI scans uses the same technology, but is more compact and lightweight.

The main difference between a normal MRI scan and a fMRI scan is the results that can be obtained.

Whereas a normal MRI scan gives pictures of the structure of the brain, a functional MRI scan shows which parts of the brain are activated when certain tasks are carried out.

This includes language, memory and movement.