People arrested during a protest are TWICE as likely to be convicted and imprisoned as those arrested for the same crime under different circumstances, new study shows

A new study of criminal sentencing practices shows that people arrested during protests are twice as likely to face prison time when compared to those charged with the same crime in non-protest circumstances.

The study, which was conducted by the Russian newspaper Novaya Gazeta, looked at 12,000 assault convictions in Russia from 2016 to 2019 and compared them to the 57 assault convictions given to protesters who participated in citywide protests in Moscow in July and August of 2019.

The researchers found that protesters charged with assault were twice as likely to face prison time when compared to those convicted of assault in non-protest settings. 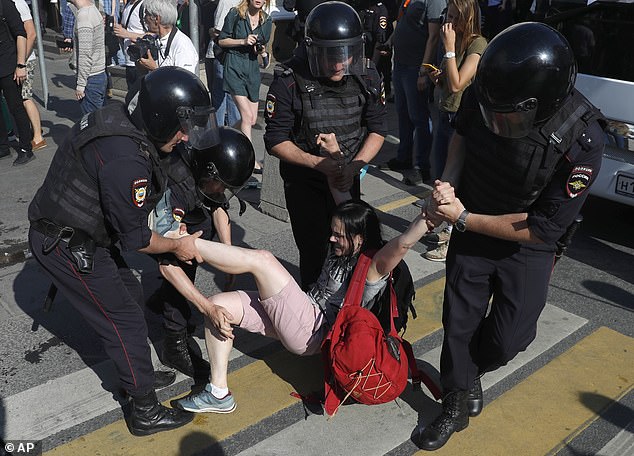 A study of more than 12,000 assault cases in Russia found that people arrested at protests were twice as likely to be sentenced to jail time as those arrested for the same crime in non-protest settings

80 percent of protesters ended up with prison sentences compared to just 40 percent of non-protesters convicted of the same assault charge.

Protesters were also given longer sentences, with an average of 10 months in prison compared to just seven months for non-protest assault cases, according to a report in The Moscow Times.

According to Russian legal experts the differences in sentencing terms and duration were motivated by the government’s desire to deter political protest.

‘Any expression of opinion is interpreted as grounds for greater public danger,’ lawyer Svetlana Sidorkina said.

‘The courts approach sentencing with the interpretation that political prisoners are a source of increased danger to society.’ 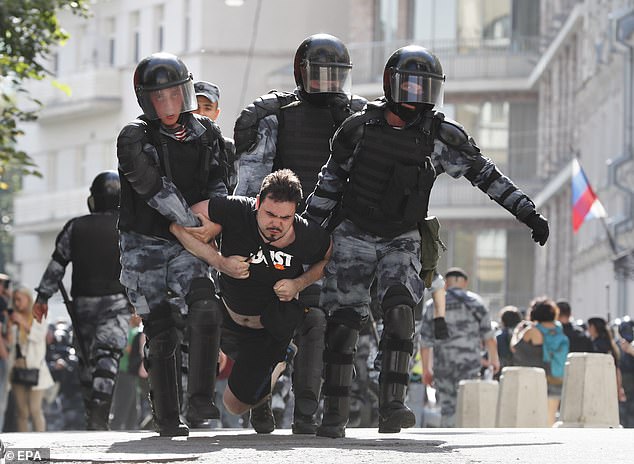 Protesters were also likely to be given longer prison sentences than people arrested for the same crime in non-protest settings, with an average sentences of 10 months compared to seven months

One protester, Kirill Zhukov, was charged with assault after he lifted the visor of a police officer’s helmet.

Prosecutor’s threatened him with up to 10 years in prison, and he was later convicted and sentenced to three years prison.

Another protester, 17 year-old Olga Misik, was detained by the National Guard after she sat down in the street and read the Russian constitution aloud.

At the local police station, her mother was fined the equivalent of $160 for allowing her daughter to take part in the protests, and Misik was warned against joining future protests.

‘They told me that my future was ruined, that I wouldn’t get to any university or go anywhere with a case against me, and that everything is great in our country,’ she said. 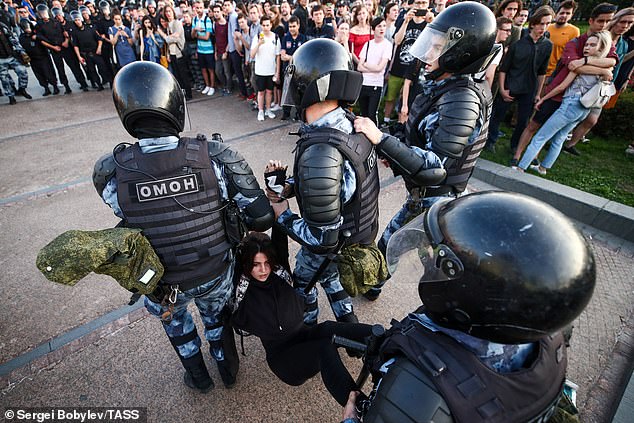 ‘And they asked me why I was so negative about the police.’

The protests originally began in support of a group of independent political candidates who said they’d been unfairly prevented from taking part in a local election.

Groups as large as 40,000 gathered at different locations around the city over the course of nearly three weeks to support the politicians.