Rise of the fembots! People are more comfortable interacting with a robot if it appears FEMALE than male – especially if it has human-like features, study finds

Companies looking to replace human staff with robots at hotels, restaurants and other service industries, should consider giving them a female face, study finds.

For the study, 170 volunteers were asked by experts from Washington State University in Pullman, Washington, for their thoughts on a scenario involving a hypothetical robot working in a service job – such as as a hotel greeter.

The team discovered that people are more comfortable talking to a female presenting robot, especially if it has human-like features.

The researchers said that in future, as well as a female face, it could be important for robots to have some degree of personality, especially if working in service jobs. 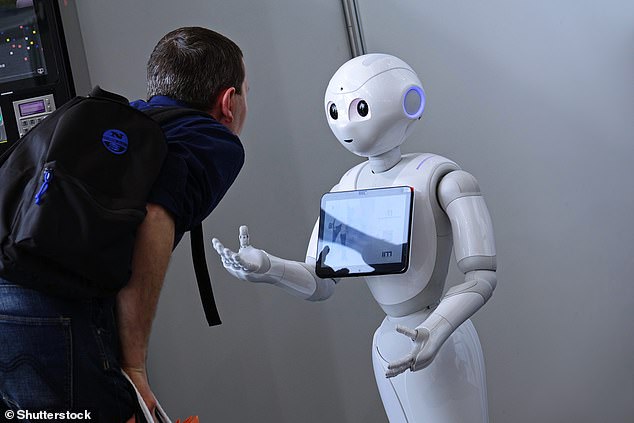 Companies looking to replace human staff with robots at hotels, restaurants and other service industries, should consider giving them a female face, study finds. Stock image

Researcher Soobin Seo said people have a tendency to feel more comfort if they are being cared for by females because of gender stereotyping in service roles.

‘That gender stereotype appears to transfer to robot interactions, and it is more amplified when the robots are more human like.’

The coronavirus pandemic has sparked a rise in service industry firms bringing robots on board, including as waiters and greeters – to fill a rising number of vacancies.

However, even before the pandemic, the hotel industry struggled with high turnover of employees, leading to high numbers of vacancies.

Professor Seo said some hotels turned to robots for a range of functions, including dishwashing and room cleaning – but also customer service.

Examples range from the female humanized robots named ‘Pepper’ at the Mandarin Oriental Hotel in Las Vegas to the fully automated FlyZoo hotel chain in China where guests interact only with robots and artificial intelligence (AI) features.

In the UK a Chinese buffet chain purchased four ‘BellaBots’ at about $20,000 each to fill gaps in staffing caused by the coronavirus pandemic, and recent studies have shown the average price of a bot is less than a full-time employee’s salary. 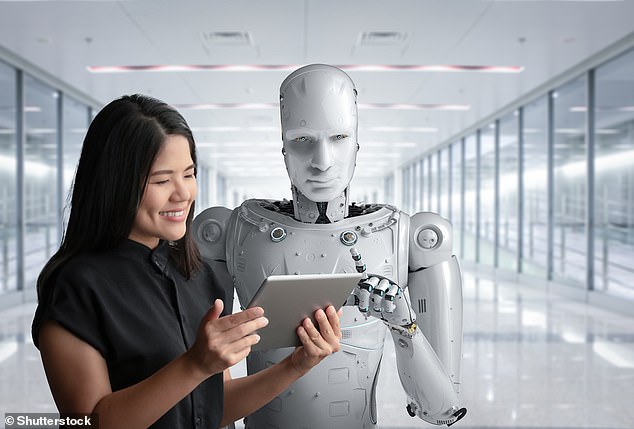 For the study, 170 volunteers were asked by experts from Washington State University in Pullman, Washington, for their thoughts on a scenario involving a hypothetical robot working in a service job – such as as a hotel greeter

Chinese restaurant chain is forced to use ROBOT waiters priced at £14,500 each

A Chinese restaurant chain in England was been forced to make use of robotic waiters, after struggling for staff during the Covid pandemic.

The Chinese Buffet unleashed one BellaBot in each of four restaurants in Liverpool, St Helens, Bolton and Wigan, to serve food to diners.

When the buffet re-opened after the last lockdown, its owners decided to serve food to people at the table, ordered via an app, rather than allow them to serve themselves.

This added an extra strain on the already short waiting staff, according to owners Paolo Hu and Peter Wu, who said the BellaBots had already proved popular with diners.

To gain a deeper understanding of how people view these robotic employees and autonomous services, volunteers were quizzed by the team.

They were given one of four scenarios about interacting with an AI-driven service robot working at a hotel.

In one of the scenarios, they were greeted by a male service robot named Alex with a face and human-like body. Another scenario was worded in exactly the same way, but instead of a male named Alex, it was a female named Sara.

In the other two scenarios, the robots were both gendered and named differently, but described as being ‘machine-like’ with an interactive screen – not a face.

Volunteers were asked to rank how they felt about the interactions with the robots.

Those who were shown the female robot rated the experience as more pleasant and satisfying than those who had the male robots.

The best reaction overall was for the female presenting human-like robots, with the male-presenting featureless robots having the lowest reaction score.

The expert gave the example of a robot breaking down, or failing in its service – such as losing luggage or getting a reservation wrong.

In this case a customer may want a human employee to help them, so advised against going completely automated.

She is in the process of investigation how the personality of a robot could impact customer perception – such as whether they are extroverted and talkative, or introverted and quiet.

‘These are important considerations for AI robot developers as well as for hospitality employers to consider as they think about adopting robots more widely,’ Seo said.

‘We may start to see more robots as replacements of human employees in hotels and restaurants in the future, so we may find that some of the psychological relationships that we see in human-to-human interaction also implemented in robot interactions,’ she said.

The findings were published in the International Journal of Hospitality Management.