‘Northern Line’ of the Great Wall of China breached by Genghis Khan was NOT built to fend off invading armies but to stop the migration of nomadic populations, study claims

‘Genghis Khan’s Wall’ in Mongolia was built to control the movements of nomadic populations, contrary to common belief, a new study claims.

Archaeologists have conducted the first systematic survey of ‘The Northern Line’ – part of The Great Wall that’s located outside China.

It has long been believed that this particular section of the Great Wall network was built to defend against large armies, primarily those of the legendary Genghis Khan.

However, a study claims the primary use of the wall was not defensive.

Instead, it was designed to help the ruling Liao dynasty control the migration of the region’s inhabitants

Researchers came to the conclusion after analysing the Northern Line with drones and satellite images, during the region’s first comprehensive mapping.

Regardless of its intent, it failed to keep out Genghis Khan, the fierce Mongolian of folklore.

Genghis Khan succeeded in breaching the wall several times while nobody else has managed to do so once in the 2,700-year history of the fortification.

After analysing the length of the Northern Line using drones and satellite imagery, the team identified numerous square structures that may have acted as shelter. 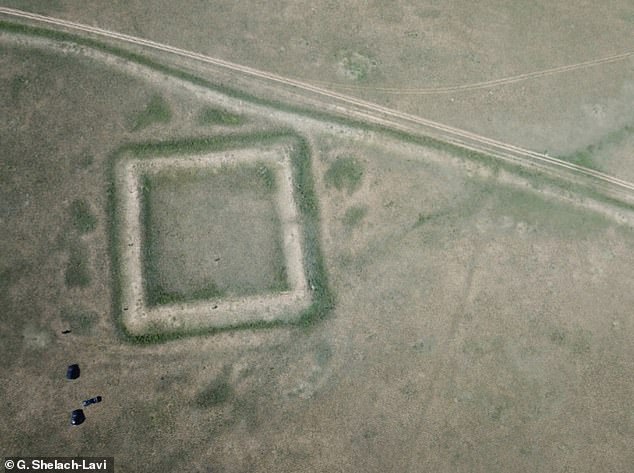 This photo taken with a drone on site shows the remains of the wall and a nearby square monument, which was found along the length of the wall

‘Our analysis suggests that it was not made to defend against large invading armies or even against nomadic raids into sedentary lands,’ said Professor Gideon Shelach-Lavi from the Hebrew University of Jerusalem and lead author of the research.

‘Rather that it was geared to monitor and control the movements of nomadic populations and their herds.’

The famous Great Wall of China actually consists of multiple fortifications, built in a piecemeal fashion between the last millennia BC and the 17th century AD.

Comparable to the London Underground, different ‘lines’ were built over centuries and run alongside and against each other to form a giant network.

The researchers looked at the ‘Northern Line’, which spans approximately 458 miles (737 km) across Mongolian grassland plains, which has been home to nomadic tribes for thousands of years.

THE GREAT WALL(S) OF CHINA

These were built in a time period spanning from the last millennia BC and the 17th century AD.

This phase resulted in the construction of fortifications 4,040 miles (6,500km) long.

As such, this single episode of wall-building represents one of the largest monuments ever constructed.

The line was built in the Medieval Period between the 11th and 13th centuries AD – an era that later saw the rise of the ruthless Genghis Khan (1162-1227 AD), who came to power by uniting many of the nomadic tribes of Northeast Asia.

As such, the Northern Line is referred to as ‘Genghis Kahn’s Wall’ as it was assumed to have been built to keep out these raiding nomads and defend against the famous empire builder.

Despite its great age, ‘surprisingly little’ archaeological work has concentrated on this medieval wall system, particularly the northern section, the research team claim.

‘This huge structure is extremely enigmatic – it is not clear when exactly it was constructed, by whom and for what purpose,’ said Professor Shelach-Lavi.

By examining the placement of the wall and the way it was built using computerised spatial analysis, as well as drones from the air and satellite imagery, the team have decided that it was aimed at expanding the influence of the Khitan-Liao Empire.

Otherwise known as the Liao dynasty, the Khitan-Liao Empire was one of the Imperial dynasties in the region that sought control over the nomadic people living along the northern territory.

In particular, many of the structures of the Northern Line are not located at high vantage points, which are typical features of defensive structures to anticipate an attack well in advance.

Instead, analysis revealed they were located at lower altitudes, likely closer to roads and other places that would aid population control. 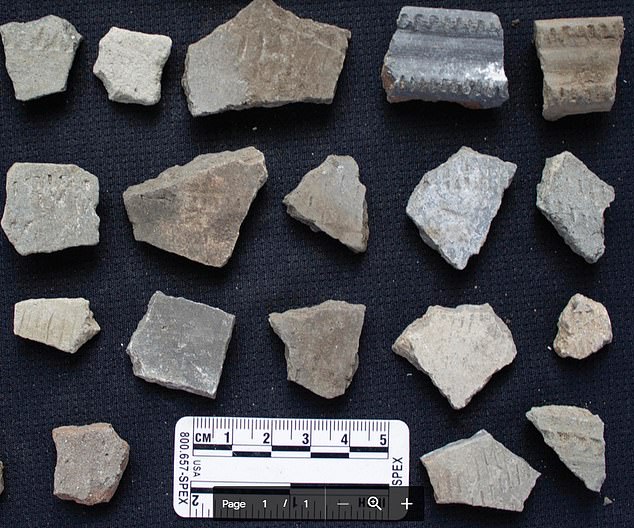 The team also identified 72 individual structures organised into clusters, each located roughly 18.6 miles (30km) apart – which is more than the amount described in ‘even the most detailed published descriptions’.

These peculiar square structures of different sizes are made of earthen walls with a height of up to 6.5 feet (2 metres).

The width of the walls at the corners of the best-preserved structures are wider, suggesting ‘they may have supported additional structures on top of them’, the team write.

Occasionally, an opening is present in a structure’s wall that may have served as the entrance, they add – suggesting they acted as shelter at various points of the wall.

Travelling between most clusters on horseback, using ox-carts or even on foot, would take no more than a few hours, the team report.

As well as this, depressions in the ground surrounding likely represent a surrounding ditch from which soil was excavated during the the square structures’ construction. 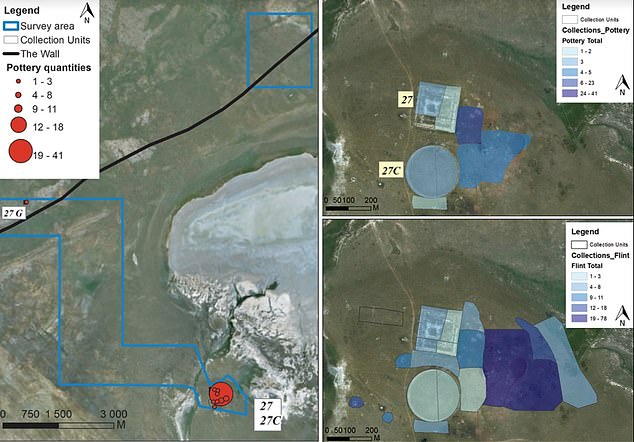 Stone artefacts were especially abundant at one particular point of the Northern Line called cluster 27. Left image shows quadrants surveyed, and the location of the collections. Right images shown collection units made around cluster 27. The size of each circle represents the density of artefacts found in the collection – top right distribution of potsherds, or broken piece of ceramic material, and bottom right, the distribution of stone artefacts. The area of each collection unit is marked with a black line and the density of artefacts found within them is indicated by the colour

But it’s the consistency with which the square structures appear along the length of the wall that indicate the Northern Line was built in a single, organised phase.

The team conclude that it was built during the Khitan-Liao Empire and pre-dated the rule of Genghis Khan, which in turn suggests it wasn’t built specifically to defend against him.

The research suggests defending against nomadic tribes and their famous leader was not the primary function of the fortification, which still stands in modern-day Mongolia.

This revelation may prompt a re-evaluation of other medieval walls around the world – not just the other branches that form the Great Wall of China. 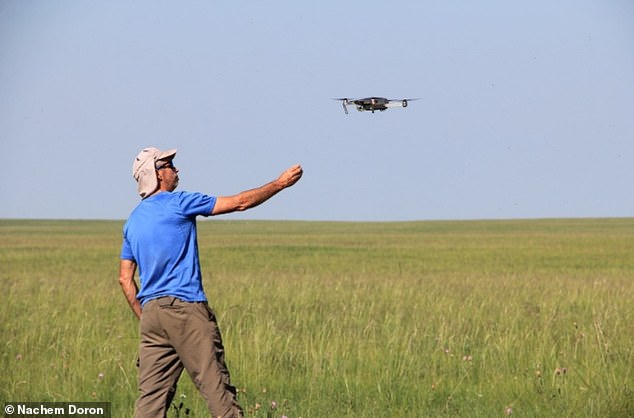 Drones helped the researchers fully map the enormous structure. Drone photography and the analysis of satellite imagery allow us to explore the function of the wall

‘Our study suggests that the assumption that these were all military structures needs to be challenged,’ said Professor Shelach-Lavi.

‘We need to study their structure and context to better understand the reasons they were built.’

The research might also have implications for the ‘success of current efforts’ to build monumental dividing walls, the team add.

The study has been published in the journal Antiquity.

GENGHIS KHAN: THE GENOCIDAL FOUNDER OF THE MONGOL EMPIRE 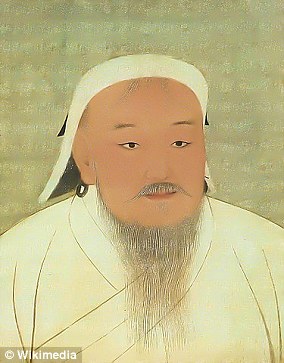 Genghis Khan was the founder and Great Khan of the Mongol Empire.

In the early 1200s he united the Mongol tribes, creating a military state that invaded its neighbours and expanded.

The Empire soon ruled most of what would become modern Korea, China, Russia, eastern Europe, southeast Asia, Persia and India.

Khan made himself master of half the known world, and inspired mankind with a fear that lasted for generations.

He was a prolific lover, fathering hundreds of children across his territories. Some scientists think he has 16 million male descendants alive today.

By the time he died in August 1227, the Mongol Empire covered a vast part of Central Asia and China.

Originally known as Temüjin of the Borjigin, legend has it Genghis was born holding a clot of blood in his hand.

His father was Khan, or emperor, of a small tribe but was murdered when Temüjin was still young.

The new tribal leader wanted nothing to do with Temujin’s family, so with his mother and five other children, Temüjin was cast out and left to die.

In all, Genghis conquered almost four times the lands of Alexander the Great. He is still revered in Mongolia and in parts of China.

Historians estimate he was responsible for the deaths of nearly 40 million people with his large-scale massacres of civilian populations.