Parasitic WORMS that can grow up to 3ft-long are being transmitted to humans via DOGS eating infested fish, study warns

A devastating tropical disease that health experts had hoped to eradicate by the end of last year is now being transmitted to humans via dogs, a study has warned.

Guinea worm is usually caught by drinking water contaminated with fleas that carry the parasite larvae, but scientists have discovered a new pathway for transmission traced back to dogs eating infested fish.

The worms mate and grow inside a person’s body, and after 10-14 months the 3ft-long (1 metre) adult worm emerges, usually from the arms or legs, to shed its larvae back into water.

There were 3.5 million cases of guinea worm worldwide in 1986 but eradication programmes helped cut that number to just 27 in 2020. 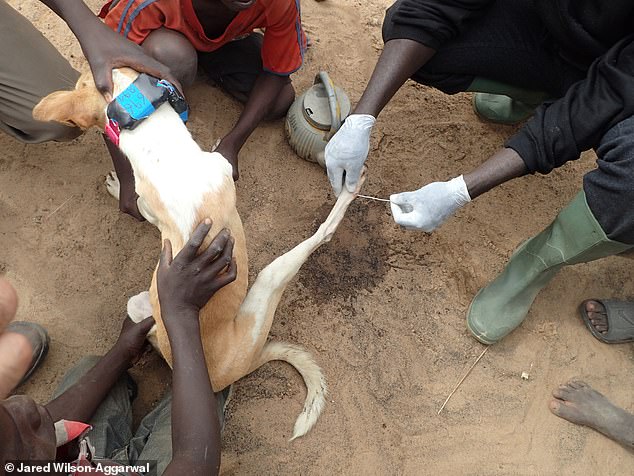 The devastating tropical disease Guinea worm is now being transmitted to humans via dogs, a study has warned. This pictures shows a Guinea worm emerging from a dog’s leg 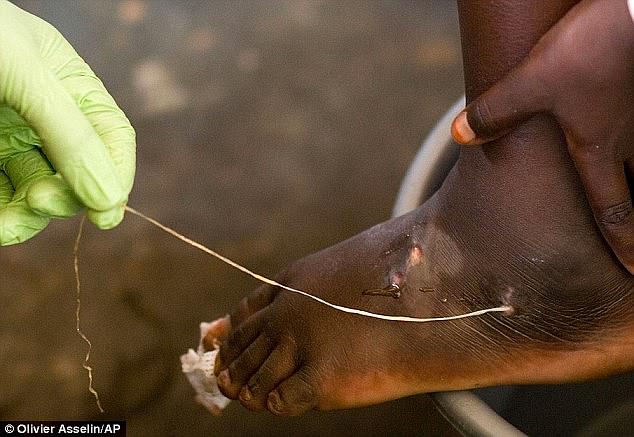 The worms mate and grow inside a person’s body, and after 10-14 months the 3ft-long (1 metre) adult worm emerges, usually from the arms or legs, to shed its larvae back into water

What is Guinea worm?

It is contracted when someone drinks stagnant water that contains water flears which harbour Guinea worm larvae.

The larvae mate in the person’s abdomen and the female worms grow to as long as 3ft.

After a year of incubation the female worm creates an agonising lesion on the skin and slowly emerges from the body.

The infection also causes fever, nausea and vomiting and disables patients for months.

The live worm can be extracted over a number of weeks by being wrapped around a stick.

The disease has affected the poorest communities in Africa and is now found in just South Sudan, Mali, Ethiopia, and Chad.

The World Health Organization (WHO) had set a target of wiping it out by the end of last year, which would have made it only the second human disease to be eradicated, but health chiefs have since pushed that date to 2030.

Now it has emerged that these efforts are being hampered by dogs eating fish that carry the parasite larvae.

This means the pets maintain the parasite’s life-cycle and humans can still catch the disease.

The parasite causes disability and trauma in some of the world’s poorest communities in Chad, Ethiopia, Mali and South Sudan.

Targeted surveillance showed that in 2020, 93 per cent of Guinea worms detected worldwide were in dogs in Chad, in central Africa.

Researchers from the University of Exeter worked for a year in several of the worst-affected villages along the River Chari in Chad.

They tracked hundreds of dogs with satellite tags to analyse movements, and revealed dog diets throughout the year using forensic stable isotope analysis of dog whiskers.

Much of the fish eaten by the dogs – usually guts or smaller fish – was discarded by humans fishing on the river and its lagoons.

‘Dogs are now the key impediment to eradicating this dreadful human disease,’ he said.

‘Our work shows that fisheries, and the facilitation of dogs eating fish, are likely contributing to the persistence of Guinea worm in Chad.

‘The challenge now is that this pathogen must be eliminated not only from people but also from animals.

‘This is a clear example of where a ‘One Health’ approach to integrating health of people, animals and the environment is required to eradicate this debilitating human disease.’

The work was sponsored by The Carter Center, founded by former US President Jimmy Carter, and work in Chad was supported by the WHO and the Chad Ministry of Public Health.

Six years ago Carter, now 97, said he would ‘like for the last guinea worm to die before I do’.

The research has been published in the journal Current Biology.

SMALLPOX: THE HISTORY OF THE KILLER VIRUS