The fossilised remains were studied by a team of German researchers who pelted neutron beams at the embryos.

It revealed the two-legged dinosaurs all hatch at different times, placing them in between modern birds and crocodiles on the evolutionary timeline.

Oviraptorids lived in Central Asia during the Upper Cretaceous Period – around 88 million to 66 million years ago — and grew to roughly the same size of humans. 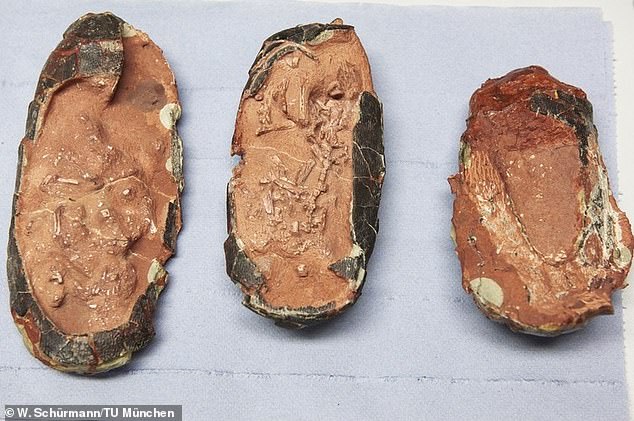 Pictured: the three oviraptorid eggs studied by scientists at the University of Bonn and the TU Munich 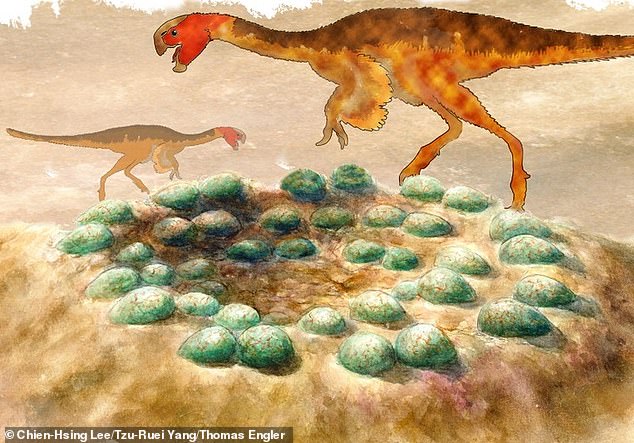 WHY ARE NEUTRONS USEFUL TO SCIENTISTS?

Neutrons are the particles in an atom that have a neutral charge.

They have a unique set of properties which make them ideal to investigate almost all kinds of matter.

Because neutrons carry no electric charge, they therefore do not interact with the electron shell of the atom, but instead with the atomic nuclei – or the centre of the atom.

Thus, neutrons are non-destructive and can penetrate deep into matter, making them an ideal probe for biological materials.

Neutrons can be used for studying geological samples, new materials for energy production and storage, chemicals which affect the environment, and polymers and plastics.

Scientists have assumed that they should be placed somewhere between modern crocodiles and birds in terms of their reproductive biology.

But they had been uncertainty surrounding whether oviraptorids chicks emerged from their eggs at the same time as their siblings – like today’s crocodiles – or hatched at different times – like modern-day birds.

Based on the internal thickness of the egg shells and bone structure of the three 67 million year-old egg fossils, the research team concluded they were more similar to birds in this regard.

‘This is different with the fossils we’ve examined – we found a pair of eggs and another egg together embedded in a block of rock,’ said Dr Tzu-Ruei Yang, co-author of the study, published in Integrative Organismal Biology.

Researchers concluded that the the 7-inch (18cm) eggs, which were taken from the Ganzhou Basin in China, were laid almost at the same time by a female oviraptorid.

By observing the length of the bones, the team estimated whether the three dinosaurs were due to hatch simultaneously or at different times based on the developmental stages of the embryos.

Another indication of embryo development is the extent to which bones are connected to each other, with a more strongly connected skeleton suggesting more advanced development.

Based on observations of the length and position of the embryo bones, researchers to concluded that one egg must have been laid earlier than the other two.

The developing embryo also would have absorbed calcium from the shell as it grew, to strengthen its developing skeleton.

Therefore, the thinner the shell, the more advanced the embryo’s development – and the older one of the eggs were compared to the other two.

Researchers summarised that the embryo of one egg was less developed than that of the two other ‘paired’ eggs.

This showed that eggs developed and hatched at different times despite being laid around the same time.

From this, the scientists concluded that the reproductive biology of oviraptorids were more similar to that of modern birds than crocodiles.

Paleontologists at the University of Bonn in Germany initially tried to determine the position of bones inside the eggs with the institute’s own X-ray microcomputer tomograph.

This technology shoots x-rays at a physical object to create a detailed 3D model – but it was not possible to distinguish the bones from the surrounding rock using X-ray tomography alone.

The team therefore took the dinosaur eggs to the research neutron source of the Technical University of Munich at the Heinz Maier-Leibnitz Zentrum (MLZ) in Garching.

The high penetration depth of the neurons made it possible to visualise the detailed internal structures of the eggs.

The study has brought the researchers one step closer to piecing together the life of the long extinct oviraptorids, who roamed Central Asia, including Mongolia and China, on two legs.

Oviraptorids were a group of dinosaurs with slender limbs, grasping hands, and a bizarre, distinctive skull.

They were usually about 3 feet to 6 feet in length – around the size of a human.

Some of the most well-preserved specimens of dinosaurs ever found are oviraptorids.

Expeditions have found oviraptorid skeletons on top of nests, suggesting the devoted adults died in sudden sandstorms while guarding their nests.

Oviraptorids lived in Central Asia during the Upper Cretaceous Period – around 88 million to 66 million years ago.