More than 25,000 tonnes of Covid-related PPE and plastic waste has already entered Earth’s oceans and almost 75% of it is likely to wash up on beaches by the end of the year, new model shows

More than 25,000 tonnes of personal protective equipment (PPE) and other types of Covid-related plastic waste has entered Earth’s oceans, a new study estimates.

Researchers in California have developed a computer model simulating the fate of plastic waste as it leaves beaches, drifts along the water and fragments into pieces.

They estimate that 8.4 million tons of pandemic-related plastic waste has been generated by 193 countries, from the start of the pandemic to August 2021.

Almost three quarters – 71 per cent – is likely to wash up on beaches by the end of the year, the model suggests.

Most of the offending Covid-related plastic is from medical waste generated by hospitals, the researchers say, which ‘dwarfs’ the contribution from PPE and packaging from online shopping giant like Amazon and eBay. 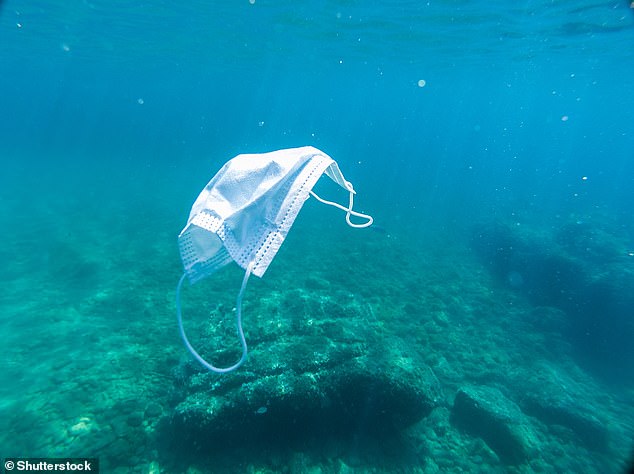 Covid-19 led to an increased demand for single-use plastics such as face masks, gloves, and face shields. But much of the resulting waste ends up in rivers and oceans, researchers warn

All can enter rivers and eventually travel into the world’s oceans if not disposed of properly.

The new study was led by a team of researchers at Nanjing University’s School of Atmospheric Sciences and UC San Diego’s Scripps Institution of Oceanography, who used data from the start of the pandemic in 2020 through to August 2021.

‘Plastic waste causes harm to marine life and has become a major global environmental concern,’ they say in their paper.

‘The recent Covid-19 pandemic has led to an increased demand for single-use plastic, intensifying pressure on this already out-of-control problem.

‘This work shows that more than eight million tons of pandemic-associated plastic waste have been generated globally, with more than 25,000 tons entering the global ocean.

‘This poses a long-lasting problem for the ocean environment and is mainly accumulated on beaches and coastal sediments.’

For their study, the team devised a model that works like virtual reality, built based on Newton’s laws of motion, according to study author Yanxu Zhang at Nanjing University.

‘The model simulates how the seawater moves driven by wind and how the plastics float on the surface ocean, degraded by sunlight, fouled by plankton, landed on beaches and sunk to the deep,’ said Zhang.

‘It can be used to answer “what if” questions – for example, what will happen if we add a certain amount of plastics to the ocean?’ 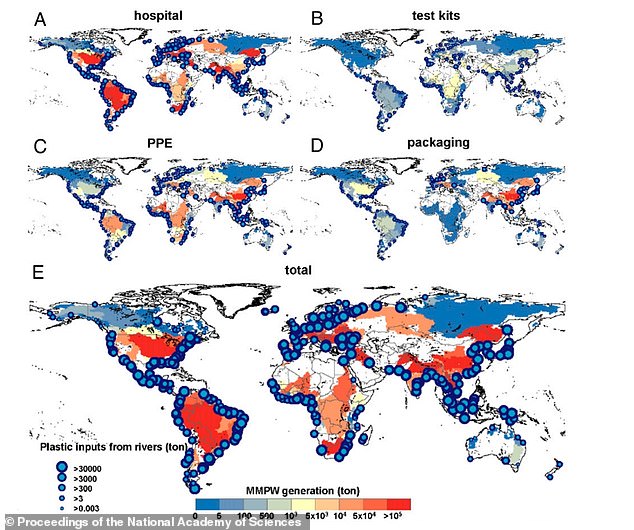 Graphic from the paper shows the different types of pandemic-associated plastics discharged to the global ocean – (A) hospital medical waste, (B) Covid-19 test kits, (C) PPE, (D) online-shopping packaging material and (E) all of them in total

The study found that most of the global plastic waste from the pandemic is entering the ocean from rivers.

Covid-19 cases among the population

Oceania: Less than 0.1 per cent

Oceania: Less than 0.1 per cent

Note: All percentages are of the corresponding global total

Asian rivers account for 73 per cent of the total discharge of plastics, with the top three contributors being the Shatt al-Arab, Indus, and Yangtze rivers, which discharge into the Persian Gulf, Arabian Sea, and East China Sea.

European rivers account for 11 per cent of the discharge, with minor contributions from other continents.

The researchers also compared the amount of Covid cases with Covid-related plastic waste that enters rivers, separated by continent.

This reflects the lower treatment level of medical waste in many developing countries such as India and China, compared with developed countries in North America and Europe with large numbers of Covid cases, the authors say.

‘When we started doing the math, we were surprised to find that the amount of medical waste was substantially larger than the amount of waste from individuals, and a lot of it was coming from Asian countries, even though that’s not where most of the Covid-19 cases were,’ said study co-author Amina Schartup at Scripps Oceanography.

‘The biggest sources of excess waste were hospitals in areas already struggling with waste management before the pandemic; they just weren’t set up to handle a situation where you have more waste.’ 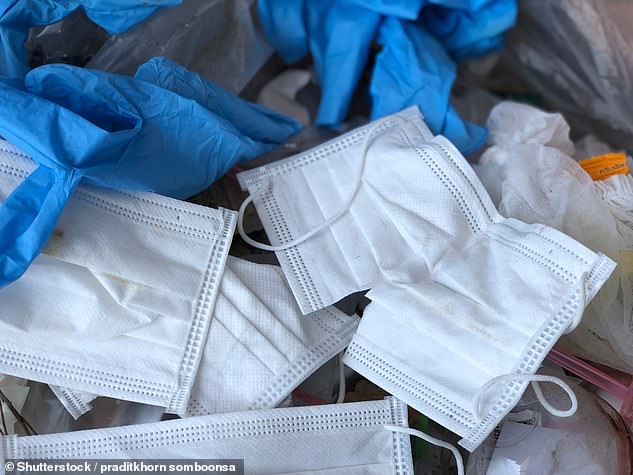 More than eight million tons of pandemic-associated plastic waste have been generated globally, the researchers estimate. Although face masks may not be thought of by some as plastic, they do feature a layer of non-woven bonded fabric to filter microorganisms from the mouth and nose – commonly made of polypropylene, a type of polymer

The researchers also estimate that within three to four years, most ocean plastic debris is expected to settle on beaches and the seafloor.

A smaller portion will go into the open ocean, eventually to be trapped in the centres of ocean basins or subtropical ‘gyres’ – large systems of rotating currents in each of the five major oceans.

Unfortunately, the world’s five subtropical gyres can go on to host garbage patches, comprised of PPE, litter, fishing gear and other debris.

The Arctic Ocean in particular is something of a ‘dead-end’ for plastic debris transported into it, due to ocean circulation patterns, the team say. 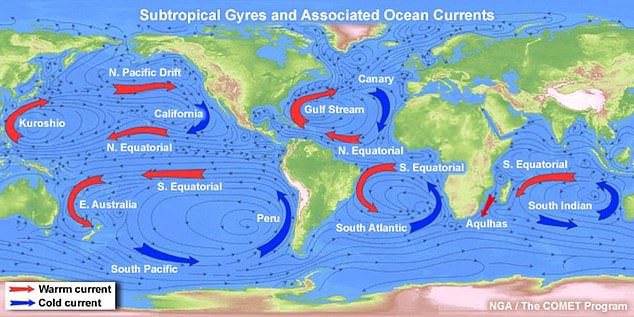 Subtropical ‘gyres’ are large systems of rotating currents in each of the five major oceans. Due to the currents’ movement, rubbish can accumulate within them

The Atlantic Ocean is thought to contain up to 200 million tonnes of microplastic pollution – 10 times more than prior estimations, a 2020 study found.

Scientists examined the uppermost surface of the Atlantic on a British research expedition and found 12 million tonnes of microplastics – plastic particles less than 5 millimetres in diameter.

From this they estimated the entire Atlantic Ocean, from surface to seabed, to be carrying at least an extra 178 million tonnes of plastic on top of previous estimates.

Just one million tonnes is approximately the same weight as 76,000 double-decker London buses.

The Arctic ecosystem is already considered to be particularly vulnerable due to the harsh environment and high sensitivity to climate change.

‘There is a pretty consistent circulation pattern in the ocean, and that’s why we can build models that replicate how the ocean moves – it’s just physical oceanography at this point,’ said Schartup.

‘We know that if waste is released from Asian rivers into the North Pacific Ocean, some of that debris will likely end up in the Arctic Ocean – a kind of a circular ocean which can be a bit like an estuary, accumulating all kinds of things that get released from the continents.’

The model shows that about 80 per cent of the plastic debris that transits into the Arctic Ocean will sink quickly.

To combat the influx of plastic waste into the oceans, the authors urge for better management of medical waste in epicenters, especially in developing countries.

They also call for global public awareness of the environmental impact of PPE and other plastic products and development of more environmentally friendly materials.

Another approach could be the development of ‘innovative’ technologies for better plastic waste collection, classification, treatment and recycling.

Members of the public can do their bit by disposing of Covid-related waste responsibly, and recycling it where possible.

The study has been published today in the journal Proceedings of the National Academy of Sciences.

Hand sanitiser has been in high demand globally during 2020, but the 70% alcohol gel which kills bacteria and viruses (including COVID-19) often comes in a plastic bottle.

To reduce plastic consumption, consider switching to a bar of soap and warm water for washing your hands.

Bars of soap can often be found in entirely biodegradable packaging, making the impact on the environment considerably less than hand sanitiser.

Alternatively, opting for liquid soap which can be refilled would allow you to reduce your plastic consumption without major changes to your lifestyle.

Ensuring you follow hand washing advice, the government states washing your hands is as effective as hand sanitiser for reducing the risk of getting ill.

Scientists at UCL have estimated that if every person in the UK used one single-use mask each day for a year, we would create 66,000 tonnes of contaminated plastic waste and create ten times more climate change impact than using reusable masks.

In a hospital environment, single-use protective wear such as masks and gloves are contaminated items, and there are systems in place for their safe disposal, which involve segregation and incineration.

However, evidence suggests that reusable masks perform most of the tasks of single-use masks without the associated waste stream.

Material, reusable masks present a great eco-friendly alternative as long as they are washed after each use.

In October 2015, the government introduced new laws to curb the use of plastic bags in the UK.

Since then, the number of plastic bags in the UK has dropped.

The coronavirus, however, has seen more people turn to disposable bags, with several states in the USA banning reusable bags entirely.

Whilst the evidence is still unclear about how long COVID-19 can live on clothing, Vincent Munster, from the National Institutes of Health told the BBC that the NIH speculates ‘it desiccates rapidly’ on porous materials.

General advice is instead of ditching reusable bags, to ensure they are washed regularly and anyone who comes into contact with them also washes their hands.

Coffee cups have been a large focus for plastic-free campaigners in recent years.

However, as lockdown restrictions have eased and coffee shops have begun to reopen, many are returning to throw-away coffee cups to reduce the risk of contracting the virus.

Several large coffee chains, which previously accepted reusable coffee cups, have also halted the use of them amid safety concerns.

Despite widespread concerns, more than 100 scientists, doctors, and academics have endorsed the sensible use of reusable containers as safe and unlikely to contribute to the further spread of COVID-19.

Reusable cups should be washed thoroughly with hot water and soap.

As pubs reopened at the weekend, many were turning to plastic cups in order to aid takeaway orders and to reduce the need for staff to touch used glasses.

Similarly to the reusable coffee cups, if washed thoroughly, a reusable glass or tumbler could be a simple sustainable swap to help curb the growing coronavirus waste problem.

Ours to Save, a platform for global climate news, and EcoDisco, a sustainable events company, have created the #PlasticFreePints initiative to encourage pub-goers to use reusable alternatives in place of the typical single-use plastic on offer.