Size ISN’T everything… for apes: Female gorillas’ social rank is dictated by their age rather than their body size – and it also makes them more attractive to mates

Female gorillas that sit at the top of the social ladder have more reproductive success than their peers, a study has found.

Unlike male gorillas, body size and the subsequent advantage in fighting has no impact on which females are the most dominant in a group. 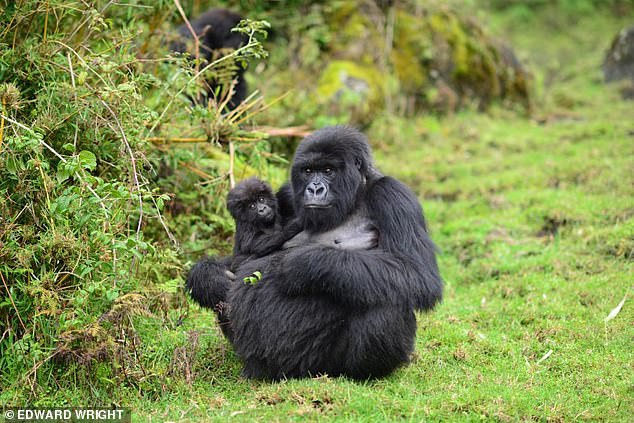 Scientists studying 34 female mountain gorillas discovered that high ranking females have babies more frequently, probably due to more access to males.Social status is determined by age and tenure, not by size, study claims (pictured, a mountain gorilla and her baby in Rwanda

‘Very few studies have examined the inter-relationship among body size, dominance rank and reproductive success together.

‘Higher-ranking female gorillas had significantly shorter inter-birth intervals than lower ranking ones – which is a proxy for reproductive success.

‘It was really interesting to find neither of these variables significantly correlated with body size.’

Researchers assessed daily behaviours of the females in Volcanoes National Park to determine which females had the highest social rank.

They then compared this with body measurements to see if rank was correlated to body size.

They found that, unlike males who achieve power thanks to wide backs and brute force, female gorillas reach a high status thanks to age or group tenure. 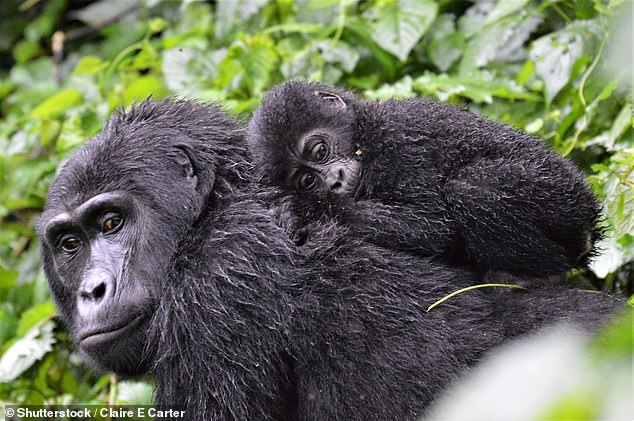 Unlike males who achieve power thanks to wide backs and brute force, female gorillas reach a high status thanks to age or group tenure (Stock)

Mountain gorillas are the largest living primate and display extreme size differences between the sexes.

Males weigh around twice as much as females and can tip the scales at around 44lbs (200 kilos).

Gorillas are the largest of the great apes, and among the world’s most endangered species.

Mountain gorillas have been widely studied in the wild since the 1950s and many factors have contributed to their endangered status, including habitat loss, poaching and snares meant for small game.

The full findings are published in the journal PLOS.

Gorillas in Rwanda, Uganda and the Democratic Republic of Congo are ‘put on lockdown’

Gorillas in Rwanda, Uganda and the Democratic Republic of Congo have been ‘put on lockdown’ amid fears that they might also be able to catch the coronavirus.

The move has seen gorilla tourism suspended for present and the closure of sanctuaries for other apes — including orangutans, which are also endangered.

While habitat loss and poaching have transitionally been the largest concern for the future of great apes, viral diseases are now ranked in the top three for some species.