NASA’s Mars helicopter went up again, going faster and traveling a total distance that was about the length of an American football field on its third trip through the wispy air of Mars.

Like the first two flights, the small experimental flying robot, named Ingenuity, perfectly executed its instructions from Earth. At 1:31 a.m. Eastern time — 12:33 p.m. local Mars time — it lifted 16 feet off the ground, then flew a round-trip distance of 328 feet before landing back where it started.

That was about 25 times as far as the second flight flew three days ago. The helicopter reached a top speed of 4.5 miles per hour, and the flight lasted about one minute and 20 seconds.

The flight was a test of the helicopter’s navigation system, which visually keeps track of its location by comparing ground features recorded by its onboard camera. The farther it traveled, the more images its camera had to take to remember the landscape below. If it flew too fast, the helicopter could lose track of where it was.

“This is the first time we’ve seen the algorithm for the camera running over a long distance,” said MiMi Aung, the helicopter’s project manager, said in a NASA news release. “You can’t do this inside a test chamber.”

Ingenuity, about three feet tall, is an $85 million project to demonstrate that controlled flight, like an airplane or a helicopter, is feasible on Mars, where the atmosphere at the surface is just 1 percent of Earth’s.

It was tacked on to Perseverance, NASA’s latest Mars rover, which arrived on the red planet in February. Before Perseverance heads off on its main mission — to seek hints of ancient life in a dried-up river delta — the Ingenuity team has 30 Martian days, or about 31 Earth days, to complete five test flights of the helicopter.

“Today’s flight was what we planned for, and yet it was nothing short of amazing,” said Dave Lavery, the helicopter project’s program executive. “With this flight, we are demonstrating critical capabilities that will enable the addition of an aerial dimension to future Mars missions.”

Last Monday, Ingenuity made history as the first powered aircraft to fly on another planet. The first flight was a short one: a simple up-and-down that totaled 39.1 seconds off the ground. The second flight, on Thursday, went a bit higher and made a short lateral move.

With the success of the first three flights, the helicopter’s engineers have a bit more than a week to complete the final two, which will further push Ingenuity’s capabilities. Ms. Aung, the project’s manager, said after the first flight last week that she hoped the final one would travel as far as some 2,300 feet from its starting point.

The fourth flight will take off in a few days, NASA said.

There are currently no plans to put a second helicopter on Mars. But Bob Balaram, the project’s chief engineer, said he and his colleagues had begun sketching out designs for a larger Mars helicopter capable of carrying some 10 pounds of science equipment. 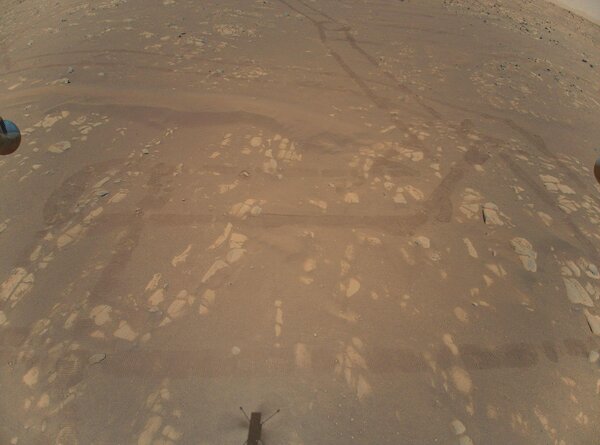