Newly-discovered hummingbird is already critically endangered: Blue-throated creature in the Andes faces extinction with as few as 500 left

A species of hummingbird newly discovered in South America is already critically endangered with only a few hundred left in existence.

Researchers came across the previously unknown Blue-throated Hillstar on an expedition in the Ecuadorian Andes last year.

Bird experts believe there are no more than 750 individuals left and the number could even be lower than 500. 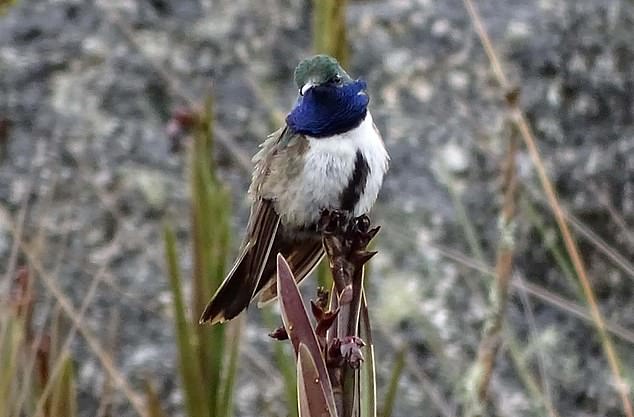 Researchers came across the previously unknown Blue-throated Hillstar on an expedition in the Ecuadorian Andes last year but it is already facing extinction because of its small range, specialised habitat and threats from human activity

WHY IS THE HILLSTAR UNDER THREAT?

The Blue-throated Hillstar is specially adapted for its cold environment.

Its limited range means that as its home comes under threat it will struggle to forge a new habitat.

Human activities including grazing and gold mining are believed to be responsible for the threat to the newly-discovered hummingbird.

Experts believe there could be as few as 500 of the birds remaining.

The Blue-throated Hillstar is found only along bush-lined creeks in an area of about 40 square miles.

Experts say that hillstars are unusual among hummingbirds as they live in high-elevation habitats in the Andes and have special adaptations to cold temperatures.

Threats to its habitat include fire, grazing, and gold mining, and it meets the criteria to be considered critically endangered.

Dr Francisco Sornoza-Molina, of the Instituto Nacional de Biodiversida in Ecuador, first observed and photographed a previously unknown hillstar during fieldwork in in April 2017.

Following the first expedition, he engaged fellow researchers in the study of the possible new species, returning in May to capture specimens and confirm the finding.

The researchers dubbed the new species Oreotrochilus cyanolaemus, or the Blue-throated Hillstar, after its irridescent blue throat.

Study co-author Dr Sornoza-Molina said: ‘Complete support from national and international conservation agencies is needed in order to save this species.

‘The action plan for the conservation of this bird is creating a network of protected areas along its geographic range.’

Professor Christopher Witt, a hummingbird expert of the University of New Mexico in the US, said: ‘The hillstar hummingbirds occur in the most rugged, isolated, and inaccessible parts of the Andes. 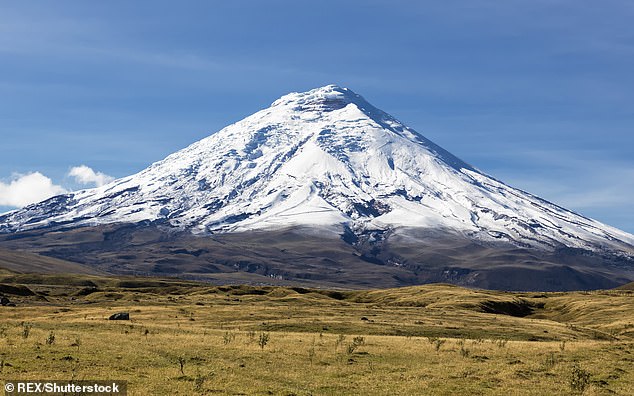 Researchers believe there are no more than 750 individuals left and the number could even be lower than 500. An expert said the hummingbirds lived in the most ‘rugged, isolated, and inaccessible parts of the Andes’ in Ecuador (file photo)

‘They roost in caves, forage on the ground, and spend half their lives in hypothermic torpor, so the discovery of a new species in this group is incredibly exciting.’

He added: ‘This striking discovery confirms that life in the high Andes still holds many secrets to be revealed.

‘The location is fitting for a new species of hillstar, because it’s a remote, high mountain range that is isolated and is sandwiched between the ranges of two other hillstar species.

‘The authors did a thorough job comparing the new form to its relatives in every respect.’

The findings were published in the journal The Auk: Ornithological Advances.

In a recent study, researchers at the University of Connecticut studied 18 hummingbird species from seven of the nine hummingbird groups throughout North and South America.

Research scientist Alejandro Rico-Guevara explained that a hummingbird’s tongue, which can be stuck out about the same length as its beak, is tipped with two long skinny tubes, or grooves.

Nectar is drawn into the tongue by the elastic expansion of the grooves after they are squeezed flat by the beak.

While the unusual tongue structure is collapsed when the tongue crosses the space between the bill tip and the nectar pool of a flower.

But once it contacts the nectar surface, the supply of fluid allows the collapsed groove to gradually recover to a relaxed cylindrical shape as the nectar fills it.

The bird then squeezes nectar from its tongue by collapsing the grooves and loading elastic energy into the groove walls.

Researchers have found that hummingbirds process visual information in a different way to other animals.

Rather than judging how objects move across their field of vision, like humans and other animals, the tiny birds judge objects by how close or far away they seem.

Objects growing larger are perceived as coming towards the birds while those shrinking are processed as moving away.

The Canadian scientists believe relying on this approach enables them to carry out their lightning quick manoeuvres without crashing. 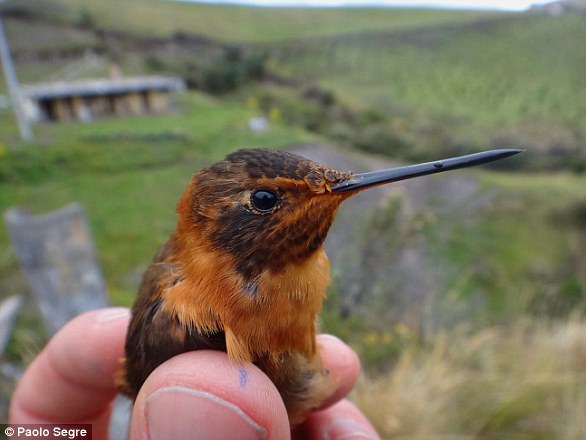 The number of times a hummingbird’s wings beat is different from one species to another, and ranges from 720 to 5400 times per minute when hovering.

The wings of humming birds require lots of muscle to power them, the wing muscle for most birds accounts for about 15 per cent of their body weight – hummingbirds can be up to 30 per cent wing muscle.

Hummingbirds are also the only birds that can fly backwards thanks to their flexible wing joints and some hummingbirds fly at speeds greater than 33 miles per hour.

Because there is so much muscle to power when in flight, aerobic respiration for the muscles requires a large heart to provide a constant supply of oxygen via the blood. As a result, a hummingbird’s heart is relatively the largest of all animals at 2.5 per cent of its body weight.

Due to the huge energy requirements, hummingbirds eat up to twice their body weight in food every day and spend most of their time – when they’re not flying – resting on twigs.

They won’t be found walking though as they have very small and weak feet.