Scientists have long been puzzled by how Chinook salmon navigate from the Pacific Ocean around Alaska and Canada to freshwater rivers and streams to lay eggs during mating season.

A new study suggests the fish are guided not by instinct but magnetic pulses from the Earth, which help the salmon keep track of their bearings throughout the year.

The salmon are able to sense these magnetic signals thanks to small magnetoreceptors made up of magnetite crystals, which work as a kind of biological GPS receiver. 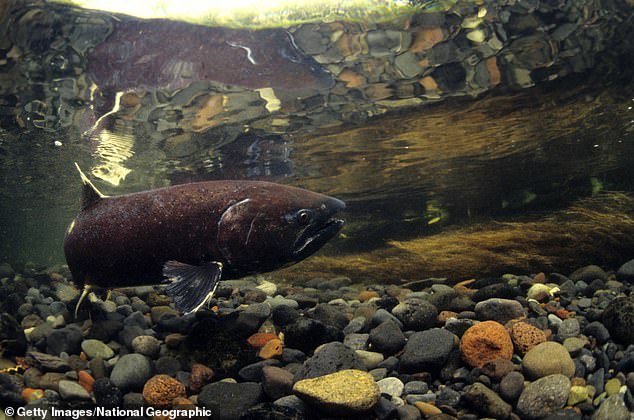 A new study has revealed that Chinook salmon have small magnetite crystals in their bodies, which help them sense magnetic pulses from the Earth, using it as a kind of GPS to keep track of where they are

Magnetite crystals are natural magnetic minerals that have been observed in other animals that use pulses in the Earth’s magnetic field to track where they are, including rats, birds, sea turtles, and lobsters.

‘To our knowledge, these results are the first to demonstrate that a magnetic pulse affects orientation behavior in fish,’ claims the report, from a team at Oregon State University, University of North Carolina, Chapel Hill, and LGL Ecological Research Associates.

To test the salmon’s sensitivity to magnetic radiation, the team used an electrified coil system that can reverse the polarity of magnetic particles in water to test the reaction of three different groups of fish.

A third group was used as a control and subjected to no magnetic pulses as at all.

The team found that the control group seemed to swim around at random, while the fish exposed to the altered magnetic pulse swam largely in the direction of the altered pulse.

The group exposed to the conventional magnetic pulses swam in ways that were essentially identical to how other Chinook salmon have been observed to move in the ocean. 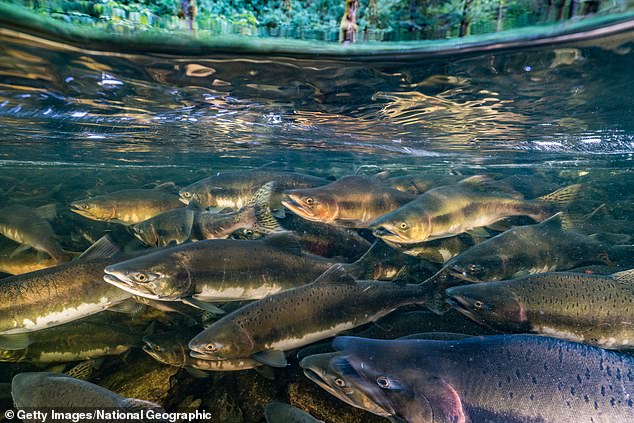 The salmon lose track of the magnetic pulse in freshwater, and the researchers believe they instead use a complex system of chemical sensing organs to navigate upstream to lay and fertilize eggs

One lingering mystery is how the salmon continue to navigate once they leave the ocean and enter freshwater rivers and streams during mating season.

The salmon lose contact with the Earth’s magnetic pulses in freshwater and the researchers believe the salmon shift to a still mysterious chemical sensing system to guide them.

According to Oregon State’s David Noakes, these two systems work in tandem with one another.

‘(A salmon) goes through a special kind of learning when it’s incubating and just before it leaves the river,’ Noakes told The Sacramento Bee.

‘It pays very close attention to the chemical nature of the water it’s exposed to. The same way you remember your grandmother’s kitchen from the smell of baking bread and chocolate cookies and that kind of stuff.’

When young salmon reach the mouth of the river where they were born they begin to sense magnetic pulses from the Earth, Noakes says, creating the equivalent of a GPS pin for that specific location.

As they move through the ocean, they’re able to consistently orient themselves in relation to the position where they first started receiving magnetic pulses, which allows them to return again to reproduce.

‘In the big picture, these salmon know where they are, where they’re supposed to be, how to get there and how to make corrections if needed,’ Noakes said.

‘While they’re in freshwater, they’re imprinting upon the chemical nature of the water. When they hit salt water, they switch over to geomagnetic cues and lock in that latitude and longitude, knowing they need to come back to those coordinates.’