Jupiter looks good in all kinds of light.

A set of images released Tuesday show the planet in infrared, visible, and ultraviolet light. The combination reveals Jupiter’s characteristic Great Red Spot — a cyclonic storm large enough to engulf the Earth — in stunning detail. Also visible in the photos is the Great Red Spot’s smaller counterpart, aptly nicknamed Red Spot Jr. That storm, whose scientific name is Oval BA, appears to the bottom right of the Great Red Spot in the visible-light and ultraviolet images.

Astronomers were able to photograph Jupiter’s atmosphere in these different wavelengths of light by using both a camera on NASA’s Hubble Space Telescope and an infrared imager on the Gemini North telescope in Hawaii. The images were first captured on January 11, 2017.

Such photos can help researchers glean new insight into the super-storms, hot spots, and cyclones that define the gas giant’s stormy atmosphere. 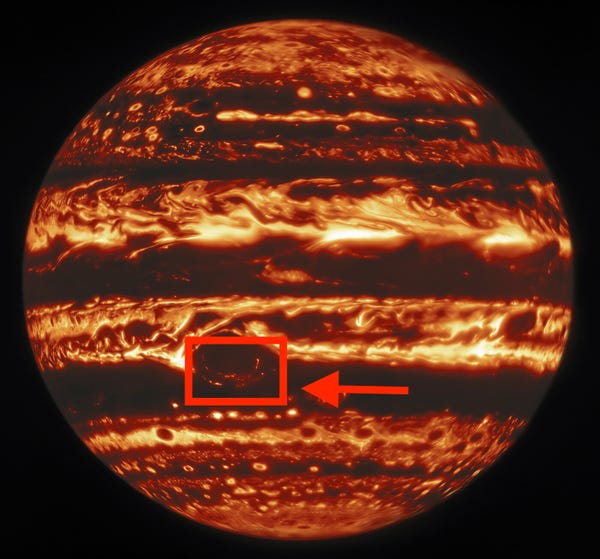 The infrared image of Jupiter shows that the cloud cover of the Great Red Spot is full of holes. Through these gaps, heat from the planet’s surface is leaking into the atmosphere.

In visible light, the holes look like swaths of different, darker clouds, but the infrared image confirmed that there aren’t any clouds in those darker patches. They’re just gaps in the giant storm.

“It’s kind of like a jack-o-lantern,” Michael Wong, a planetary scientist at the University of California, Berkeley, said last year.

“The closest analog is eddies in the ocean,” he said in a release. “As the storm clouds spin, you can get little anomalies from these eddies that form streaks by just winding up.” 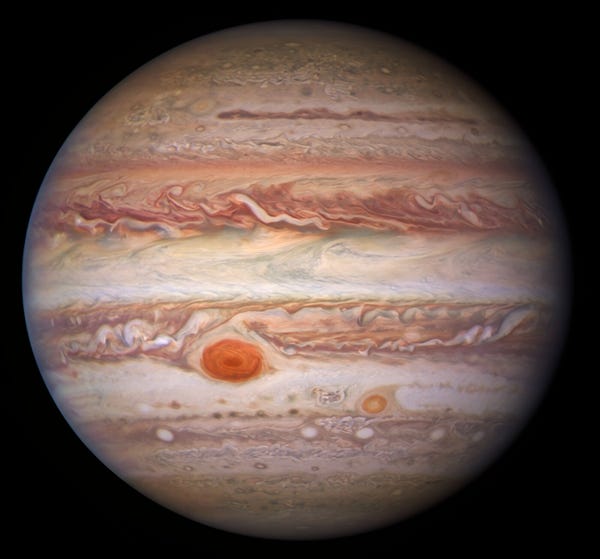 To create the infrared images, Wong’s team used a technique called “lucky imaging.” That’s when a ground telescope takes many short-exposure images of the same spot, and researchers then select the sharpest ones (which are generally taken in moments when Earth’s atmosphere was creating little interference). By stitching together these images of each region, the researchers crafted a portrait of the entire planet.

Keeping tabs on Jupiter’s Great Red Spot using different types of imaging may help solve the mystery of its shrinking. In the 1800s, the Great Red Spot was almost 25,000 miles across. Since then it’s shrunk by 60% — according to Wong’s team, the spot is currently only 10,000 miles wide.

A view of Red Spot Jr. 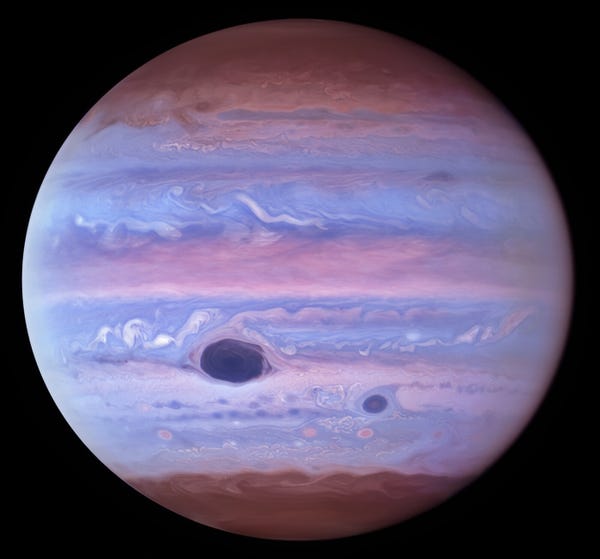 Jupiter’s Red Spot Jr. formed in 2000, when three storms merged together. Although the region appears red in the visible-light image, that’s not always the case — when the spot first formed, it was white. Then it turned red several years later, and in the four years since Hubble took the newly released images, the red spot has changed back to white again.

Although Red Spot Jr. isn’t visible in the infrared-light view of Jupiter, four large hot spots near Jupiter’s equator do appear in the image. Like in the Great Red Spot, these bright patches are regions where heat from the planet below oozes into the atmosphere. 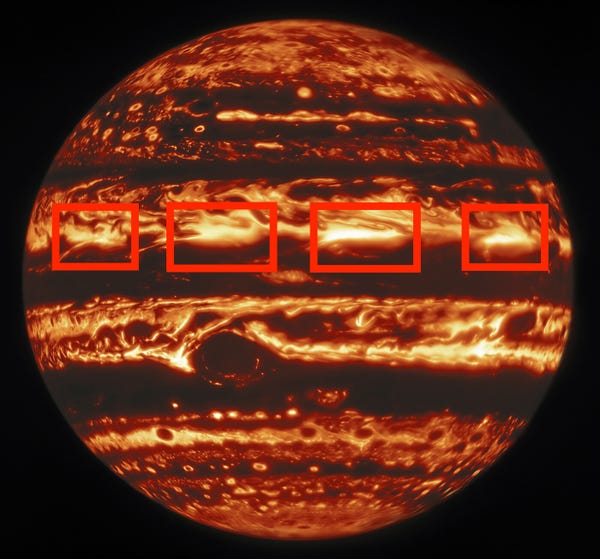 Another feature visible in the infrared image is a bright streak atop a darker patch in the planet’s northern hemisphere.

This band is likely a giant cyclone, or series of cyclones, nearly 45,000 miles wide. 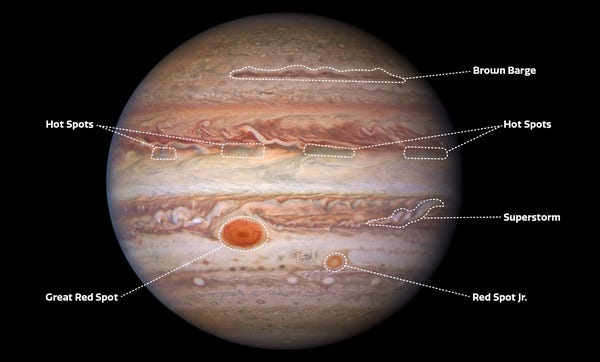 At visible wavelengths, the cyclones appears dark brown, so this type of feature is known as a “brown barge.”

Morgan McFall-Johnsen contributed to this story.