If left to run for some 14 billion years — roughly the current age of the universe — a new type of atomic clock could keep accurate time to within a tenth of a second.

The design by US experts makes use of a bizarre phenomenon called quantum entanglements, in which particles become inextricably linked.

This entanglement, the researchers explained, helps reduce the uncertainty involved in measuring the oscillation of atoms used by atomic clocks to keep time.

The clock could be used to help reveal the elusive ‘dark matter’ thought to make up more than three-quarters of the universe — and to study gravity’s effect on time. 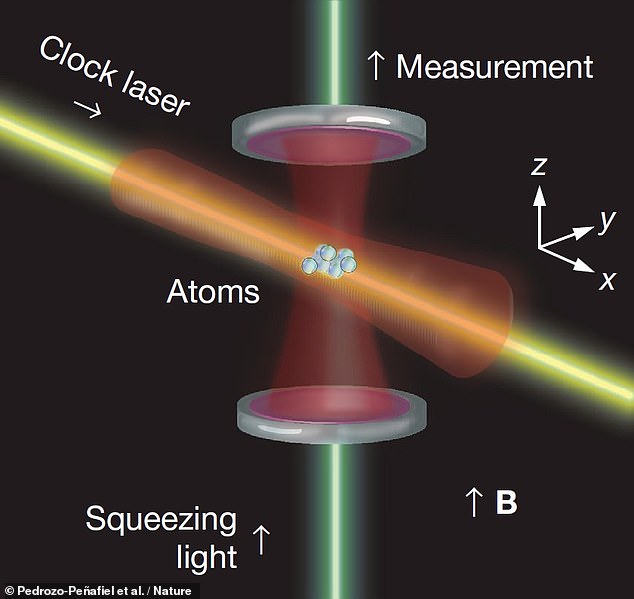 If left to run for some 14 billion years — roughly the current age of the universe — a new type of atomic clock could keep accurate time to within a tenth of a second.  Pictured, the new design works by measuring the oscillation of ytterbium atoms that have been entangled with a laser

‘Entanglement-enhanced optical atomic clocks will have the potential to reach a better precision in one second than current state-of-the-art optical clocks,’ said paper author and electrical engineer Edwin Pedrozo-Peñafiel of MIT.

In a similar way to how a grandfather clock uses the swinging of its pendulum to keep time, atomic clocks use lasers to measure the regular oscillations of clouds of atoms — the most stable periodic events that scientists can presently observe.

Ideally, one would be able to use the motion of a single atom. Yet on atomic scales, the bizarre rules of quantum mechanics come into play — and measurements are subject to probabilities that must be averaged out to yield reliable data.

‘When you increase the number of atoms, the average given by all these atoms goes toward something that gives the correct value,’ explains paper author and physicist Simone Colombo of the Massachusetts Institute of Technology, or ‘MIT’.

Current atomic clocks take measurements from thousands of ultra-cooled atoms — which are corralled into an optical ‘trap’ with lasers and probed by a different laser whose frequency is similar to that of the vibrations of the atoms being measured.

However, even this approach is subject to a degree of quantum uncertainty — but, as the team have shown, some of this can be eliminated by turning to quantum entanglement, in which groups of atoms give correlated measurements.

This, the researchers explained, means that the individual oscillations of the entangled atoms tighten up around a common frequency — thereby increasing the precision of the measurements taken by the clock.

In their new design, Dr Pedrozo-Peñafiel and colleagues entangled some 350 atoms of the rare Earth element ytterbium, which oscillates 100,000 times per second more often than caesium, the element employed in conventional atomic clocks.

This fact means that — if tracked accurately — the new clock can distinguish even smaller internals of time.

As with a regular atomic clock, the team trapped atoms in an optical cavity bounded by two mirrors — but then fired a laser through the cavity such that it bounced between the mirrors, interacting repeatedly with the atoms and entangling them.

‘It’s like the light serves as a communication link between atoms,’ said paper author and physicist Chi Shu, also of MIT.

‘The first atom that sees this light will modify the light slightly, and that light also modifies the second atom, and the third atom, and through many cycles, the atoms collectively know each other and start behaving similarly.’

The team then used another laser to measure the average frequency of the atoms — similar to the approach used in existing atomic clocks. The team found that the entanglement allowed the clock to reach the desired precision four times faster. 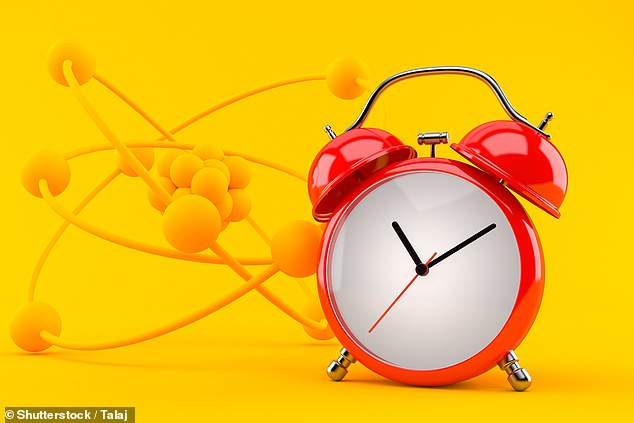 ‘The question is, how long do you need to reach a certain precision. Many phenomena need to be measured on fast timescales.’

The new clock design, Professor Vuletic added, could be used to better address various outstanding mysteries of the universe.

‘As the universe ages, does the speed of light change? Does the charge of the electron change?’ he began.

‘That’s what you can probe with more precise atomic clocks.’

Dark matter is said to make up roughly 85 per cent of the matter in the Universe. But, it does not reflect light, making it invisible.

It cannot be seen directly with telescopes, but astronomers know it to be out there because of its gravitational effects on known matter.

Dark matter is thought to be the gravitational ‘glue’ that holds the galaxies together, while just 5% the Universe consists of known material such as atoms and subatomic particles.