Netflix launches a FREE plan in Kenya, allowing users to access a quarter of its films and TV programmes on Android smartphones at no cost

Streaming giant Netflix has launched a free subscription plan – but only for users in Kenya with an Android phone.

The ad-free plan, which is rolling out to users in Kenya now, is part of Netflix’s attempts to get more users in the African market.

When users sign up, no payment information is required – all they need to do is confirm they’re 18 or over, enter an email address and create a password.

There’s a catch though – the free option only has around one-quarter of all content that’s offered with a paid subscription.

Shows that are included in the tier are ‘Blood & Water’, ‘Money Heist’, ‘Lupin’, ‘Dynasty’, ‘Bridgerton’, ‘Army of the Dead’, ‘The Witcher’, among others.

Netflix, which streams in more than 190 countries, has previously taken steps to boost usage in Africa, including creation of a paid mobile-only plan and partnerships with local telecom operators to ease payments.

With 209 million subscribers around the world, Netflix is the world’s biggest streaming service, but the African continent is seen as an untapped goldmine of users and one of its final frontiers in its bid for world domination.

MailOnline has contacted Netflix regarding whether a similar plan would be rolled out to other countries in Africa, or to other continents. 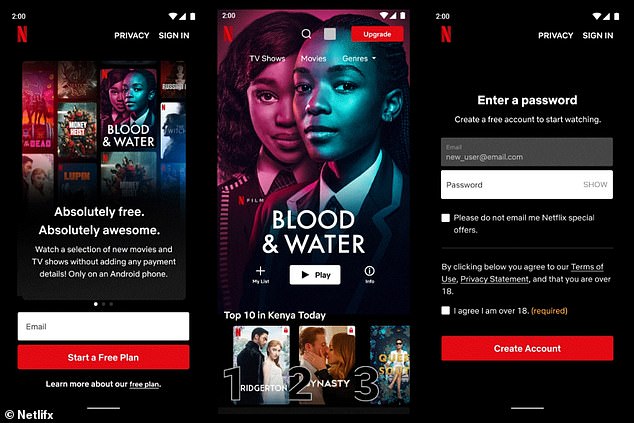 If you’re based in Kenya, you can enjoy Netflix on an Android phone for free. However, you’ll only have access to about one quarter of the total content that’s available on the streaming site

NETLIX SUBSCRIBERS BY REGION IN 2023

The streaming service only has 1.4 million subscribers on the African continent, according to Digital TV Research, a London-based industry forecaster – a fraction of the 13 million in the UK and 74 million in North America.

Digital TV Research predicts Netflix subscriptions in Africa will soar to 15.06 million by 2026, up from 5.11 million expected at the end of this year.

It also projects Netflix to lead subscription video on demand services on the African continent with 6.26 million paying customers in 2026.

Netflix has been available in Kenya and other African countries since its widescale international expansion back in 2016, but the new plan suggests Kenyans users are yet to give it a try.

Cathy Conk, director of product innovation at Netflix, outlined the new plan in a blog post published on Monday.

‘At Netflix, we want everyone to be able to enjoy the suspense of “Blood & Water”, the romance of “Bridgerton” and the adventure of “Army of the Dead”,’ she said.

‘Now we’re giving audiences in Kenya the chance to experience these stories for themselves – completely free of charge.

‘If you’ve never watched Netflix before – and many people in Kenya haven’t – this is a great way to experience our service.

‘And if you like what you see, it’s easy to upgrade to one of our paid plans so you can enjoy our full catalog on your TV or laptop as well.’

Conk said she hopes many of the people who try the free plan ‘love Netflix so much that over time they upgrade to a full, paid subscription’.

Kenyan users can create up to five free profiles as part of the plan, which come with personalised recommendations, parental controls, and profiles (including kids) just like the normal paid plan.

However, some functions, such as the ability to download a show or movie, are not be available under the free plan. 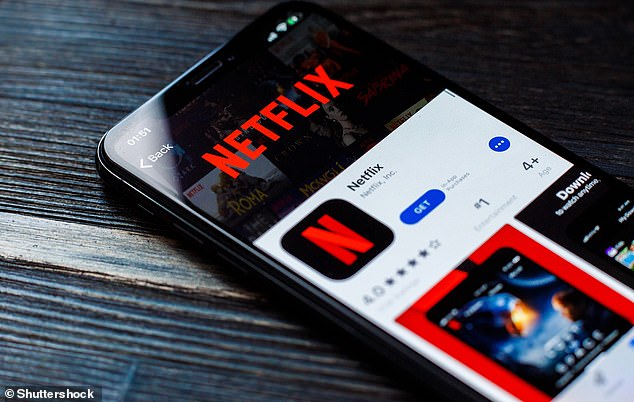 Digital TV Research predicts Netflix subscriptions in Africa will soar to 15.06 million by 2026, up from 5.11 million expected at the end of this year

Shows that are not included in the free plan will be marked with a lock icon. Clicking on one of those titles will encourage the user sign up for a paid option.

The non-paying Netflix subscribers in Kenya will not be counted in the paid total the company reports each quarter, a company spokesperson told Reuters.

Netflix has experimented with free offers before. In 2020, it made some episodes of series such as ‘Stranger Things’ and movies including ‘To All the Boys I’ve Loved Before’ available around the world for no charge via web browsers.

In July, Netflix published its latest earnings report, which revealed disappointing subscriber growth for 2021, and confirmed it would be expanding into games in the near future.

The streaming giant reported gains of just 5.5 million subscribers in the first six months of this year – its weakest numbers since 2013.

The earnings report showed it added 1.5 million subscribers during the April-June quarterly period, below the 1.75 million analysts had expected, as well as 5.5 million for the first half of the year.

1.5 million is slightly better than the modest increase that management forecast after the service stumbled to a sluggish start to the year, but still far below its growth rate in recent years.

Despite the slowdown, Netflix remains by far the world’s biggest streaming service in an increasingly competitive field that includes Disney+, HBO, Amazon and Apple.

THE HISTORY OF NETFLIX PRICE HIKES

May 2014: Netflix announced an increase in its monthly fee for streaming movies and television shows from £5.99 to £6.99.

The price hike was immediate for new subscribers but was delayed for two years for its existing members.

But Netflix allowed subscribers to keep paying £5.99 a month if they opt for a lower-resolution ‘SD’ quality service.

A similar price change took place for US customers, who saw their subscription fee increase by $2 (around £1.40 at the time).

Anyone who signed up to Netflix when it launched in Britain would have received the standard package for £5.99 per month.

But in an email to subscribers Netflix wrote: ‘When we raised prices for new Netflix members in 2014, we kept your price the same for two years. Your special pricing is now ending and your new price will be £7.49 per month.’

October 2017: The company raised prices in both the UK and US for the first time in two years.

The standard package price increase by 50p to £7.99 per month.

Netflix said at the time that the price change reflected the additional content added to its service.

May 2019: Netflix confirms that British customers will see the price of the standard tarriff increase from £7.99 to £8.99.

January 2021: Netflix hikes subscription fees for UK users as the country entered its third lockdown amid the coronavirus pandemic.