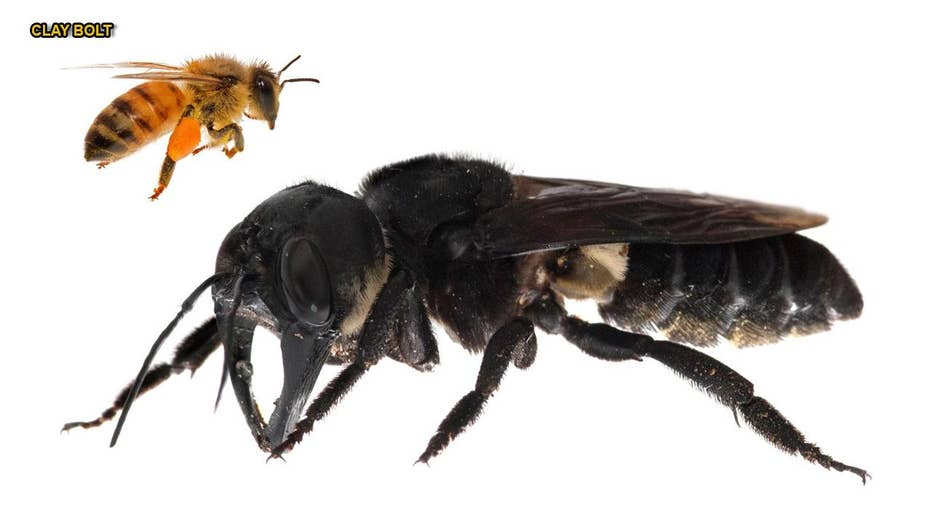 World’s largest bee with giant jaws rediscovered in the wild

In January scientists finally spotted a rare bee, which was last seen by researchers in 1981 and previously feared to be extinct. Wallace’s Giant Bee (species Megachile pluto) is an Indonesian species with a 2.5-inch wingspan and enormous mandibles. A solitary female bee was finally seen in the Indonesian province of North Maluku on the Maluku Islands, after researchers investigated the region for five days.

Local law enforcement is investigating the theft of nearly 100 beehives — each reportedly holding more than 50,000 bees – from an orchard in northern California.

Beekeeper and owner of Pottsy's Pollination, Mike Potts, said that the hives, which are used to pollinate almond orchards just south of Yuba City, were discovered missing on Jan. 17.

10 CROPS THAT WOULD DISAPPEAR WITHOUT BEES

Potts estimated that the heist of the 92 hives — approximately a third of his operation — would cost him about $44,000 in revenue.

"The hives were kind of moved around, the pallets in the background were all, basically they were set down and they just pulled all the hives off the pallets," he explained.

He told KCRA-TV it was "frustrating" for him.

"It's hard enough keeping the bees alive without someone stealing them," Potts said.

Potts, who is actually based in Oregon, suspects that another beekeeper who lost bees could be potentially responsible for this theft, as well as previous thefts. Given the weight of the hives and the boxes that house them, he believes the perpetrator may have used a flatbed truck to drive them away.

The boxes are light gray and marked with an "MP" logo.

Orchard operators hire beekeepers such as Potts — who has 15 years of experience — to provide bees that pollinate their plants.

According to the Los Angeles Times, it takes about a year for a hive to grow at full capacity and, as bees face external threats from mite infestation, beekeepers must constantly adapt to changes.

"If you're a good beekeeper, you do that," Potts said. "If you're not, you go steal them."