Neanderthals and Homo erectus, both cousins of modern-day humans, went extinct due to sudden, and unexpectedly intense, bouts of climate change.

Scientists have long sought to understand the fate of our long-lost brethren, and previous studies have indicated climate change likely plays a major role.

Neanderthals and Homo erectus, both cousins of modern-day humans, went extinct due to sudden, and unexpectedly intense, bouts of climate change (file photo)

Researchers investigated temperature, rainfall and other data over the last five million years to get a gauge of the climate for every 1,000-year window.

They also modelled the evolution of Homo species’ through time by plundering an extensive database of more than 2,750 fossils.

Climactic niche describes a locale where conditions are just right for the species to survive, not too hot, dry, cold or barren.

According to the researchers, Neanderthals were wiped out around 40,000 years ago and Homo erectus went extinct 70,000 years before that.

Having Neanderthal genes could make you more at risk from severe coronavirus, a study has found.

A genetic quirk inherited from the extinct human species, who lived 40,000 to 400,000 years ago, could make people more susceptible to Covid-19.

This genetic variation is present in modern-day humans because our ancestors had sex with Neanderthals about 60,000 years ago, researchers say.

And those who have the variant, found on chromosome three, are up to three times more likely to need ventilation if they catch the virus.

In a study of 3,199 hospital patients with coronavirus in Italy and Spain, researchers found the genetic signature was linked to a more severe illness.

However, as climate change strikes, these regions dwindle, and a species is forced to look elsewhere for a suitable home.

In the case of most of the Homo genus, they failed at least once, leading to extinction.

‘They tried hard. They made for the warmest places in reach as the climate got cold, but at the end of the day, that was not enough.’

Homo sapiens, modern-day humans, were the only species to successfully navigate each climate event, likely survived due to superior brainpower, scientists believe.

Professor Raia adds: ‘It was crystal clear, for the extinct species and for them only, that climatic conditions were just too extreme just before extinction and only in that particular moment.’

The international team says this should enable humanity to look in a historical mirror and stare at the inevitability of our own fate.

‘It is worrisome to discover that our ancestors, which were no less impressive in terms of mental power as compared to any other species on Earth, could not resist climate change,’ Professor Raia adds.

‘And we found that just when our own species is sawing the branch we are sitting on by causing climate change.

‘I personally take this as a thunderous warning message. Climate change made Homo vulnerable and hapless in the past, and this may just be happening again.’

The study published in One Earth. 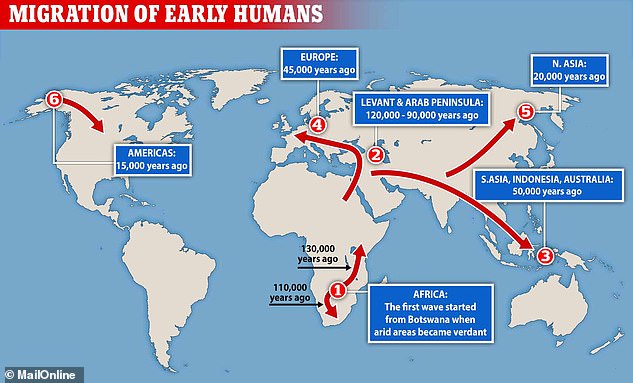 A map showing the relative dates at which humans arrived in the different Continents, including Europe 45,000 years ago.Humans and Neanderthals co-existed for about 8,000 years before Neanderthals went extinct