Never get caught out by last minute train delays again! National Rail launches ‘Alert me by WhatsApp’ tool that will provide travellers with real-time updates via the messaging app

National Rail has launched ‘Alert me by WhatsApp’, a tool that provides travellers with real-time updates via the popular Facebook-owned messaging app.

The tool, which National Rail claims is ‘more advanced than a chatbot’, lets UK rail passengers access customised travel information for their journeys.

Brits can access the service by planning their journey using the National Rail website as normal and clicking ‘Keep me updated by WhatsApp’ icon.

Site visitors then have to select the journey that they want to receive updates on – for example, the 15:29 from Maidstone East to London Victoria – and enter their phone number.

Once this is done, National Rail will send a message on WhatsApp within seconds asking users to confirm that they want to receive updates, or alternatively opt out. 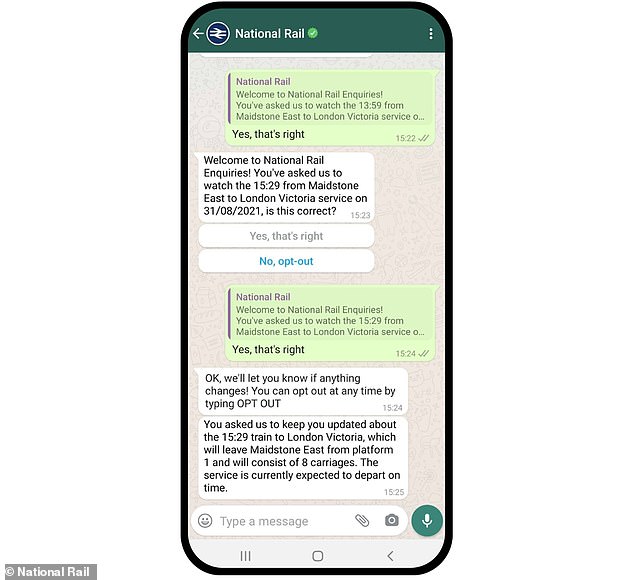 – Chose the journey you want to receive updates on.

– Enter your phone number to receive a WhatsApp message from National Rail.

When users are sick of receiving updates, they can opt out at any time by sending ‘OPT OUT’ to WhatsApp.

The benefit of Alert me by WhatsApp is it delivers personalised journey information directly through a channel already used by millions of Brits, rather than through separate travel apps.

As part of a national ‘Incentive to Travel’ trial, passengers can also opt-in to receive redeemable rewards such as a free cup of coffee from train station retailers such as Upper Crust during their journey, delivered via the service.

‘WhatsApp is already used by millions of people around the world to connect with businesses, to ask questions and order a product or service,’ said Dan Lenan, director of partnerships at WhatsApp.

‘This partnership truly leverages the power of messaging on WhatsApp to connect consumers to their specific journey.’

‘By sending helpful updates through the apps people already use, passengers can get the information they need quickly, simply and wherever they are on the rail network,’ he said.

National Rail said the tool will help Brits as they find themselves travelling more post-lockdown – including those returning to the full-time commute for work.

‘As people working from home begin commuting to their place of work again, we want to ensure they’re able to travel with confidence,’ said Jacqueline Starr, chief executive of Rail Delivery Group (RDG), which manages National Rail on behalf of the rail industry.

‘We are providing passengers access to personalised journey information via the channels they use the most.’ 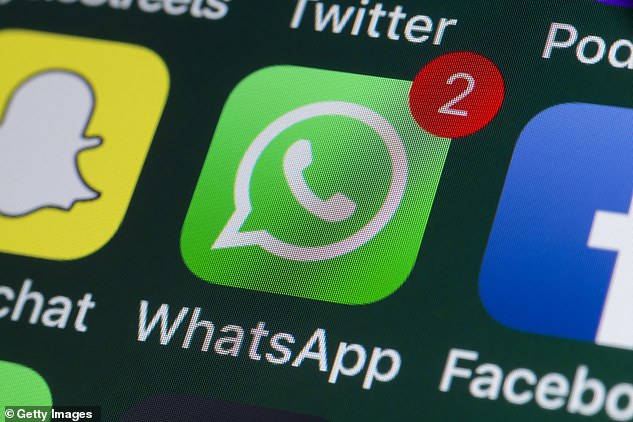 WhatsApp, which was bought by Facebook in 2014 for about $19 billion, is the most popular private communications service worldwide

Last month, WhatsApp started allowing its users to move their entire chat history when they change between an Android and an iPhone.

It means people are able to take voice notes, photos and conversations with them if they switch between operating systems.

In July, WhatsApp started letting users send messages from a computer without needing to have their smartphone connected.

The messaging platform already has an app for PC, but prior to the change users needed their phones on and connected to be able to send messages and make calls.

WhatsApp, which was bought by Facebook in 2014 for about $19 billion, is the most popular private communications service worldwide.

On New Year’s Eve 2020, WhatsApp registered the most calls ever made in a single day on its platform – 1.4 billion voice and video calls combined.