On Tuesday, a NASA spacecraft, OSIRIS-REX, will attempt to briefly touch an asteroid, Bennu, and suck up some rocks and dirt. If it succeeds, it will bring those materials back to Earth for closer study, potentially unlocking secrets to what the solar system was like when it first formed 4.5 billion years ago.

“The asteroids are like time capsules, floating in space, that can provide a fossil record of the birth of our solar system,” Lori Glaze, director of NASA’s planetary science division, said during a news conference on Monday.

Many asteroids — including Bennu — cross the orbit of Earth and could collide with our planet someday. A better understanding of these space rocks, which come in many types, could aid humanity’s ability to divert one that might slam into Earth.

What is the OSIRIS-REX mission?

Dante Lauretta, a planetary scientist at the University of Arizona who is the principal investigator of the mission, came up with the name. He said that as he jotted down themes of the scientific objectives — origins, spectroscopy, resources and security — he had most of the letters of Osiris, the Egyptian god who was the lord of the underworld but who also represented the seeds of regeneration to new life. He then played around with the name until he got the abbreviation he wanted.

The robotic spacecraft launched in September 2016 and arrived at Bennu in December 2018. Since then, it has been making observations of the asteroid, even documenting that it was shooting debris from its surface into space. The probe made a couple of rehearsal approaches in preparation of Tuesday’s attempt to collect a sample from the surface. 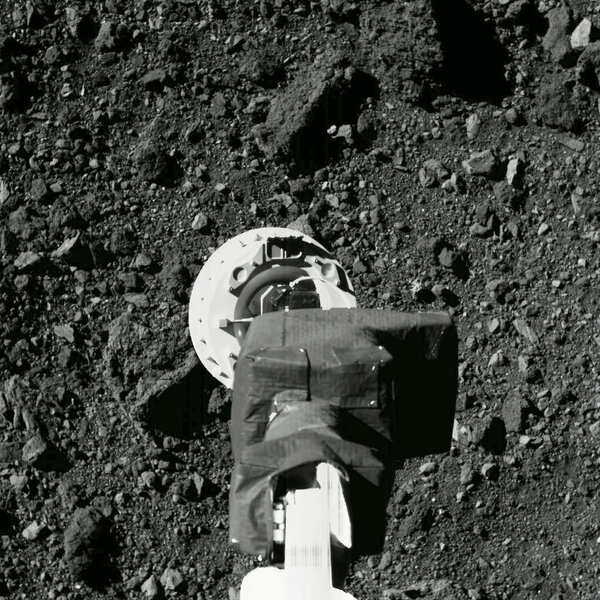 When will the spacecraft touch down, and how can I follow it?

OSIRIS-REX will start its steady approach toward the asteroid’s surface around 1:50 p.m. Eastern time on Tuesday. It is scheduled to make its touch-and-go collection of a sample of Bennu at 6:12 p.m.

Shortly before noon, mission controllers on Earth transmitted commands to the spacecraft that will initiate its descent toward the asteroid.

The mission will provide a visual simulation of the approach starting at 1:20 p.m. on its website, AsteroidMission.org. Starting at 5 p.m., NASA Television will broadcast coverage of the sample collection attempt from the mission control at Lockheed Martin Space in Littleton, Colo.

On Wednesday at 5 p.m., the space agency is scheduled to hold a news conference, also broadcast on NASA Television, to discuss how the sampling effort went and release close-up images of Bennu.

Why did NASA choose to study Bennu?

Bennu, discovered in 1999, is a carbon-rich asteroid that is almost black in color. It is about 1,600 feet wide. That compares to the Empire State Building, which is 1,454 feet tall including the antenna at the top. The carbon-rich materials are intriguing because asteroids like Bennu might have seeded Earth with the building blocks for life.

In a series of papers published in the journal Science this month, scientists reported what they have learned about Bennu so far. They found carbonate minerals in some of the asteroid’s geological features, which typically form in environments that include both hot water and carbon dioxide. That suggests that the larger body that Bennu was once part of possessed hot springs or some other sort of extensive hydrothermal system.

Scientists also noted two main types of boulders on Bennu. One is dark and rough; the other, less common, is bright and smooth. Those differences might reflect that they formed at different depths on Bennu’s parent object, and hint at its geological character.

The other reason they chose to study Bennu was the risk that it might someday collide with our planet.

Will the asteroid crash into Earth?

Bennu is categorized as a near-Earth asteroid, and scientists say there is a small chance it could slam into Earth. But even if it does, future generations will have time to prepare.

Bennu will make a series of very close passes of Earth between 2175 and 2199.

“The chance that Bennu will impact Earth is only one in 2,700,” said Andrea Riley, the program executive of an upcoming NASA mission known as the Double Asteroid Redirection Test.

If 22nd-century humans got unlucky and forgot Bennu was coming, the asteroid is not large enough to cause planet-wide extinctions. But it would be catastrophic at the point of impact. 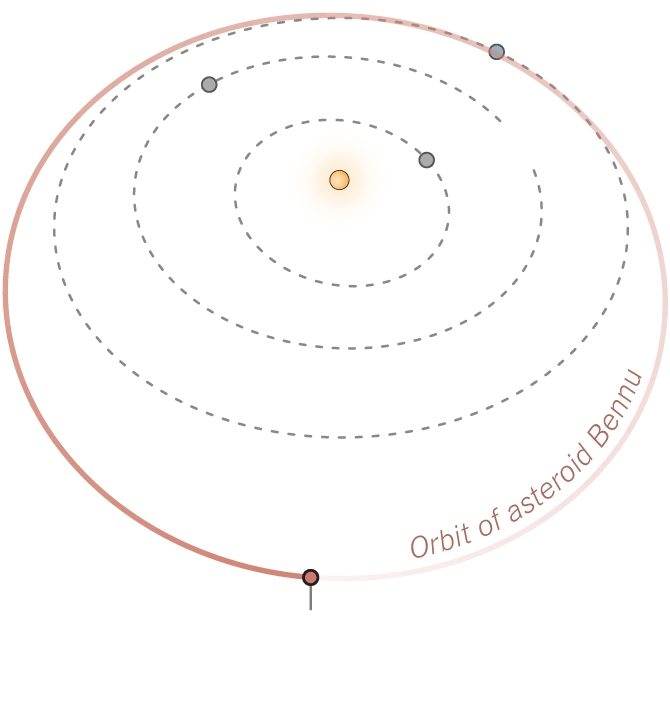 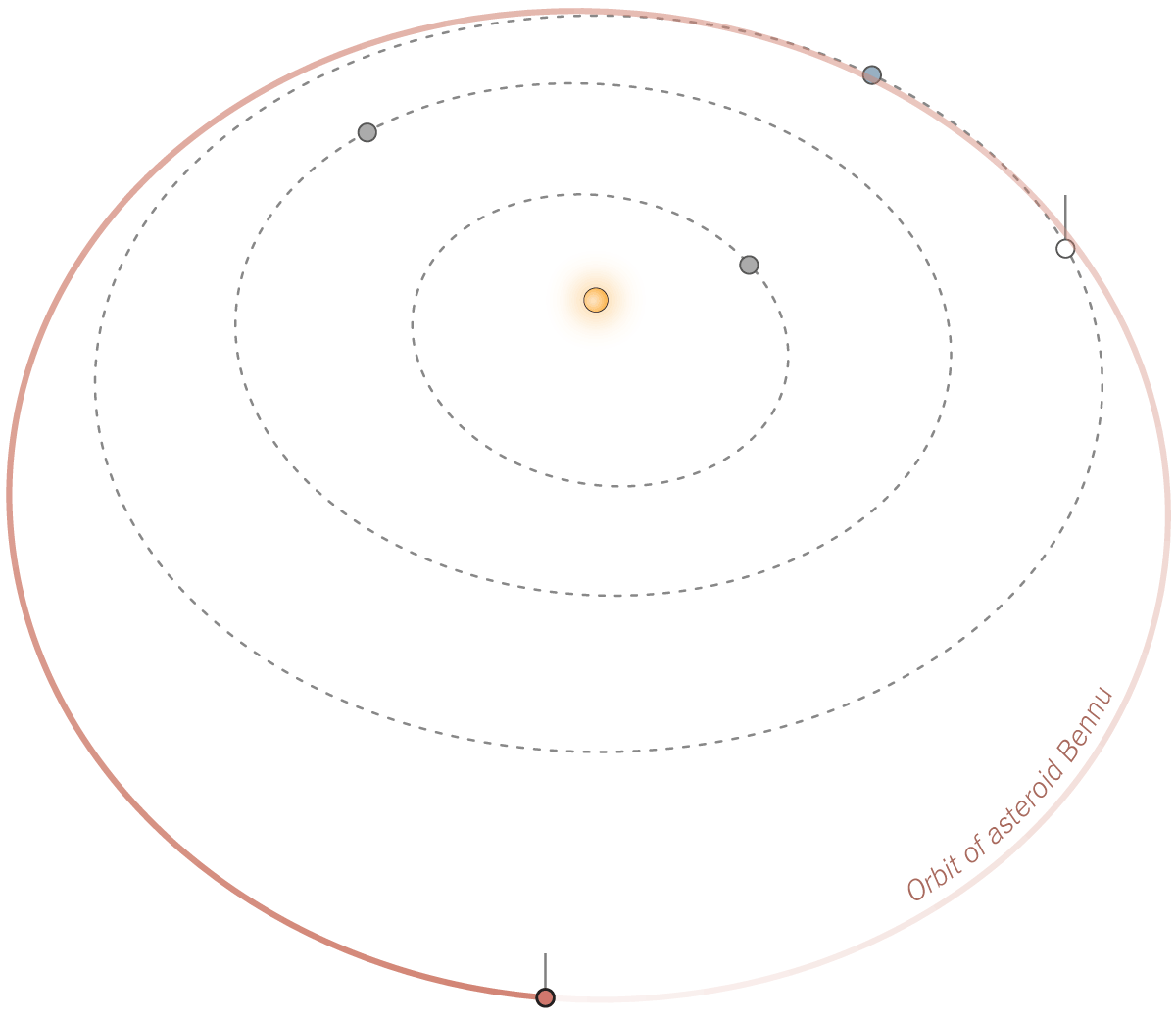 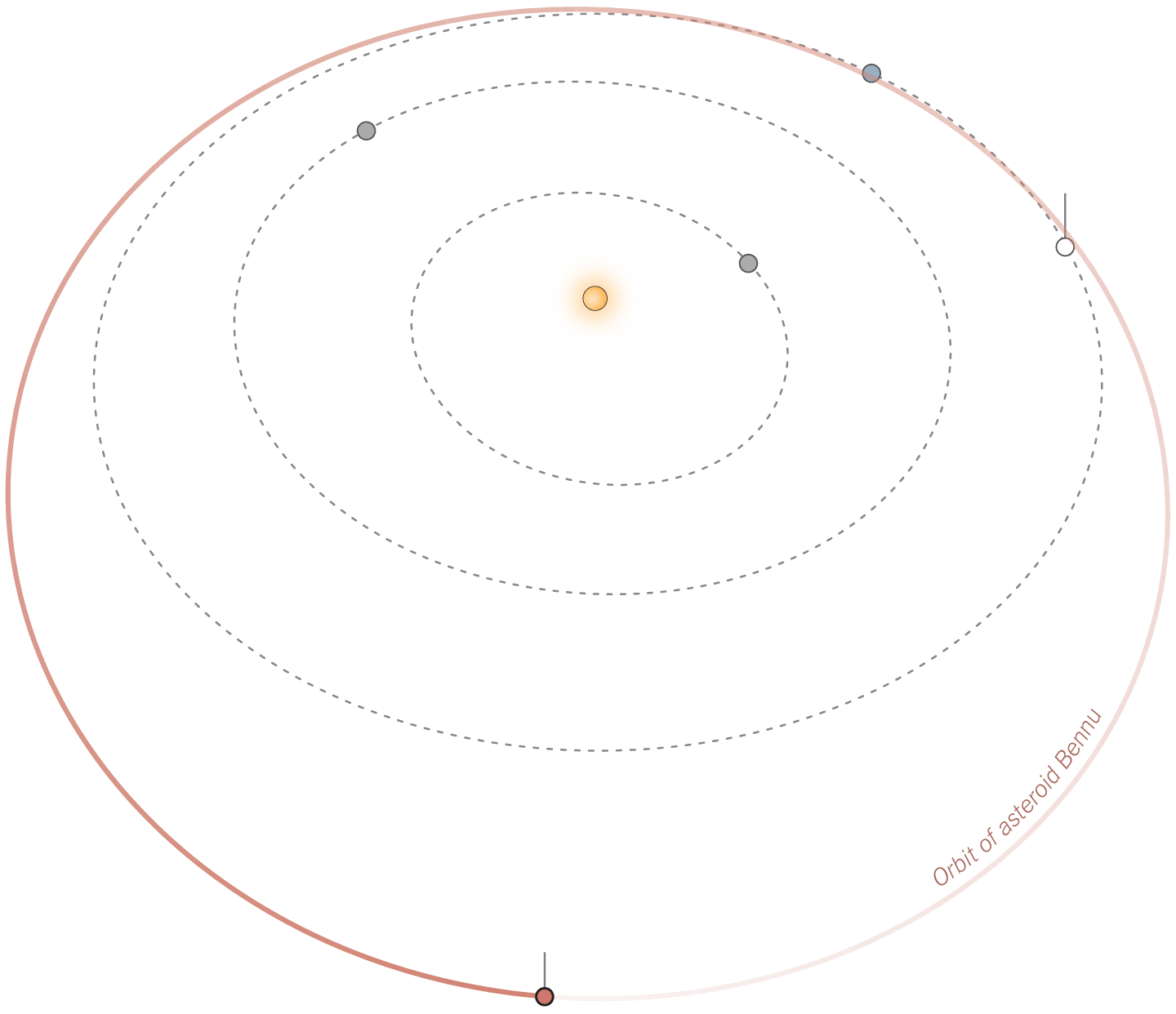 Where will the spacecraft touch down on the asteroid?

When OSIRIS-REX arrived at Bennu, the mission’s planners were surprised at what they found.

Almost the entire surface of the asteroid is strewn with boulders, where scientists had expected to find smooth patches where the spacecraft could easily grab some samples. So the mission planners had to search long and hard for a safe enough place.

In December, they finally chose Nightingale, a spot inside a crater near Bennu’s north pole. The spacecraft, 20 feet wide and about the size of a sport utility vehicle, will have to navigate carefully to the target site, which is only 26 feet in diameter. In addition, it’ll have to avoid a wall of rocks on the eastern edge of the crater. That includes a pointy pillar nicknamed Mount Doom, which is as tall as a two- or three-story building. 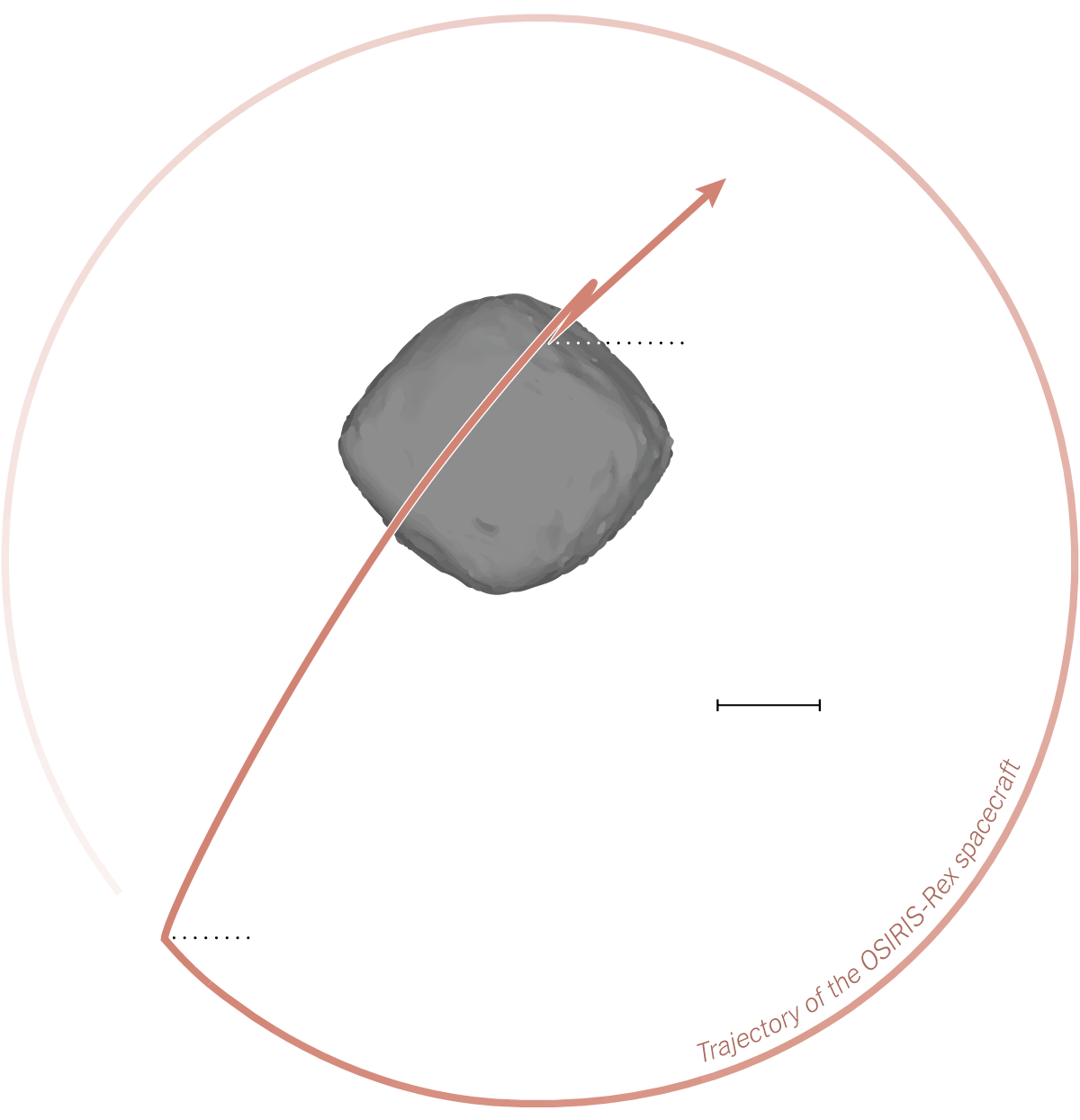 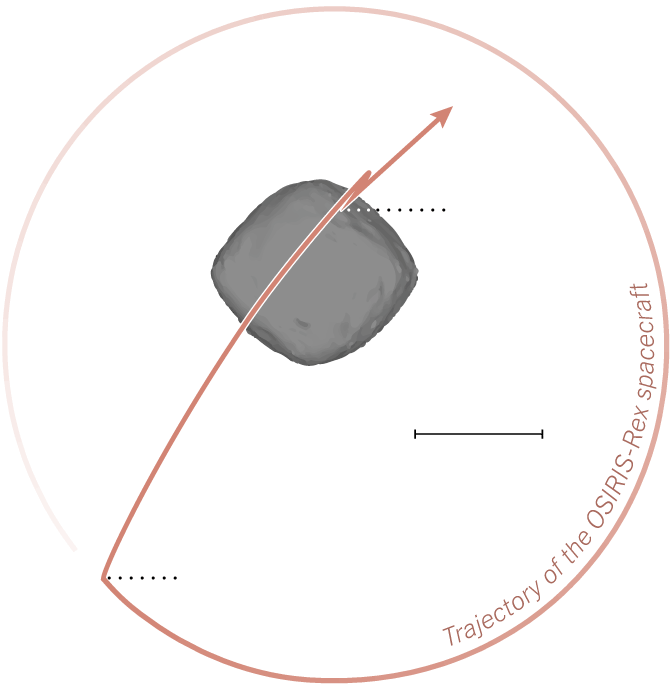 By The New York Times | Adapted from NASA

However, despite the risks, Nightingale offers the greatest potential scientific payoffs, with unobstructed fine-grained material that appears to contain carbon-rich minerals.

The original mission timeline set the sample attempt to occur in July. But the rigors of selecting the landing site, as well as the coronavirus outbreak, contributed to the delay to October.