DART mission is a ‘smashing success’: NASA reveals craft that collided with an asteroid 6.8 million miles from Earth nudged its orbit by 32 minutes – more than triple the initial goal

NASA announced Tuesday that its DART missing, which plowed a spacecraft into a small asteroid 6.8 million miles from Earth, was a ‘smashing success’ after data shows the space rock’s orbit was shifted by the impact.

The planetary defense test, conducted on September 26, aimed to see if we could nudge the path of a massive asteroid heading straight for our planet.

This successful mission marks ‘humanity’s first time purposely changing the motion of a celestial object and the first full-scale demonstration of asteroid deflection technology,’ NASA shared in the Tuesday announcement.

Before the impact, Dimorphos took 11 hours and 55 minutes to circle its parent asteroid, Didymos, and now its orbit is shortened by 32 minutes – the initial goal was to shave off at least 10 minutes. 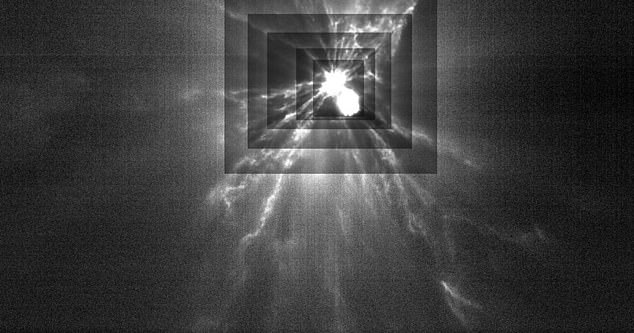 NASA announced its DART mission in September was a success. The craft was able to shift the asteroid off of its orbit when it collided with the space rock. Pictured is an imagine from an nearby satellite that shows plumes of debris streaming from the asteroid upon impact

DART launched aboard a SpaceX Falcon 9 rocket last November, which was called NASA’s ‘Armageddon moment,’ and when it reached thousands of miles away, NASA turned on the livestream and shared the event with the world.

As the craft propelled itself autonomously for the mission’s final four hours like a self-guided missile, its imager started to beam down the very first pictures of Dimorphos, before slamming into its surface.

The space probe used what is called kinetic impact, which involves sending one or more large, high-speed spacecraft into the path of an approaching near-earth object.

NASA said it would take weeks for the world to collect data on Dimorphos and its twin that were the targeted asteroid orbits – and the time has finally come.

Lori Glaze, director of NASA’s Planetary Science Division at NASA headquarters in Washington, said in a statement: ‘This result is one important step toward understanding the full effect of DART’s impact with its target asteroid. 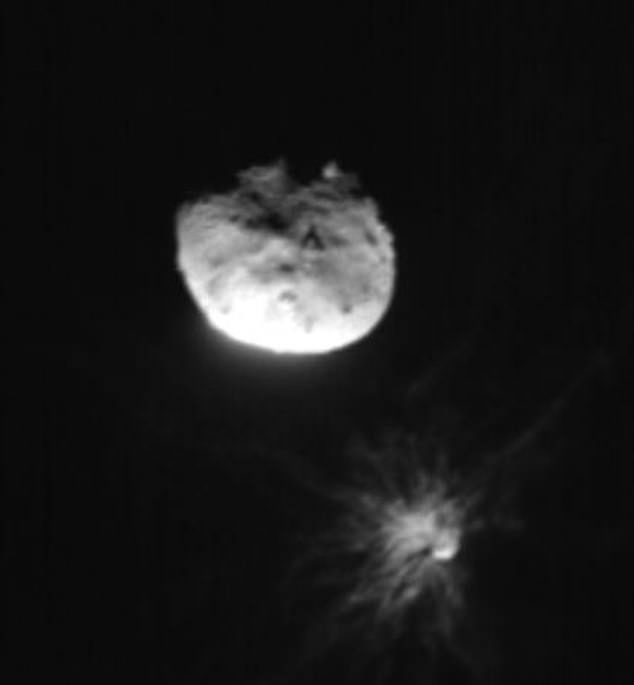 Before the impact, Dimorphos took 11 hours and 55 minutes to circle its parent asteroid, Didymos, and now its orbit is shortened by 32 minutes. Pictured is an image from LICIACube satellite. It took this image just before its closest approach to the Dimorphos asteroid

‘As new data comes in each day, astronomers will be able to better assess whether, and how, a mission like DART could be used in the future to help protect Earth from a collision with an asteroid if we ever discover one headed our way.’

Neither of the asteroids poised any threat to Earth, which is why they were chosen for this epic mission.

The investigation team is still collecting data on the twin space rocks through ground-based observatories around the world, along with radar facilities at NASA Jet Propulsion Laboratory’s Goldstone planetary radar in California and the National Science Foundation’s Green Bank Observatory in West Virginia.

And because they are receiving constant updates, the world could hear more news in the near future.

The team is also analyzing the tons of asteroidal rock that broke off the asteroid and launched into space.

Dr Daniel Brown, an astronomy expert at Nottingham Trent University, said: ‘NASA’s confirmation of an amazing 32 minute slow-down in the orbital period of this mini-moon is on the upper end of what they expected to be able to achieve.

‘This is a huge feat, not only in achieving the first step in possibly being able to protect ourselves from future asteroid impacts, but also regarding the amount of images and data captured internationally, both on the ground as well as upfront in space at a distance of only 59km [36 miles].

Scientists had believed that the impact carved out a crater and hurled streams of rocks and dirt into space, which has been captured in several images by the orbiting satellite called LICIACube.

The toaster-sized craft separated from DART a few weeks prior to impact and made a close pass of the site to capture images of the collision and the ejecta – the pulverized rock thrown off by impact.

Nancy Chabot, the DART coordination lead from the Johns Hopkins Applied Physics Laboratory (APL) in Laurel, Maryland, said in a statement: ‘DART has given us some fascinating data about both asteroid properties and the effectiveness of a kinetic impactor as a planetary defense technology. 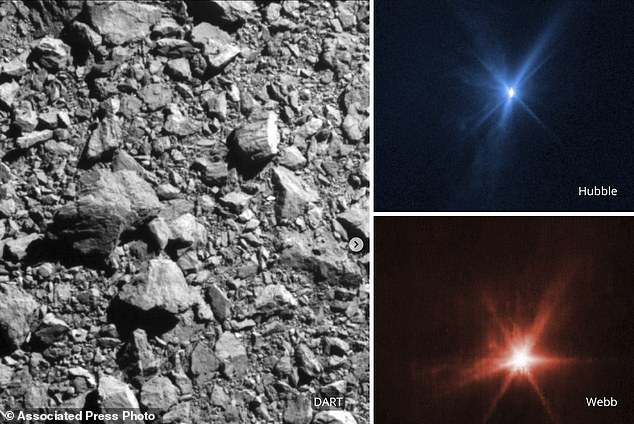 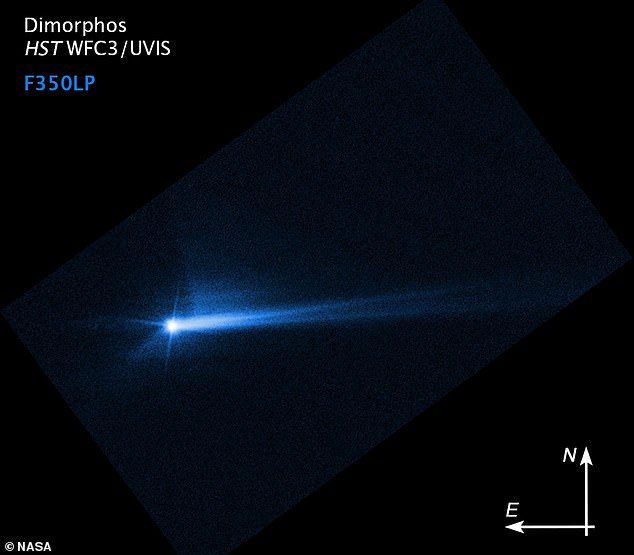 This imagery from NASA’s Hubble Space Telescope from Oct. 8, 2022, shows the debris blasted from the surface of Dimorphos 285 hours after the asteroid was intentionally impacted by NASA’s DART spacecraft 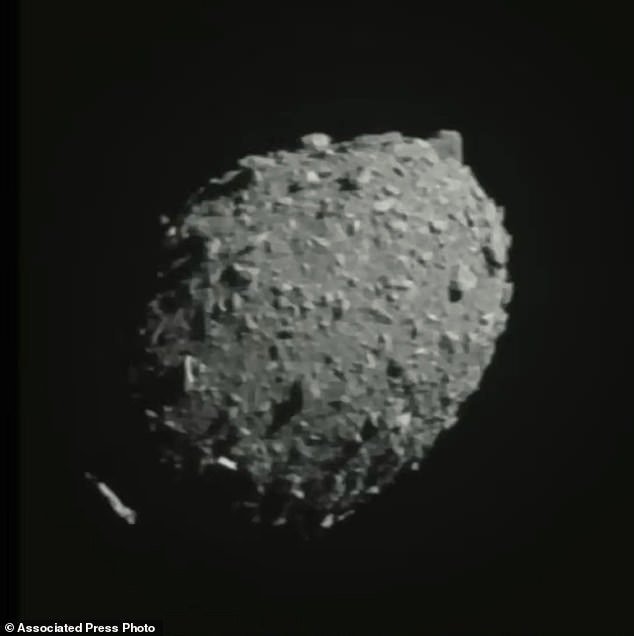 Asteroid Dimorphos did not pose a threat to Earth, which is why they were chosen for this epic mission.

‘The DART team is continuing to work on this rich dataset to fully understand this first planetary defense test of asteroid deflection.’

The aftermath was captured by NASA’s James Webb and Hubble telescopes – the first snapped the impact in infrared and the latter in visible light.

Observing the impact across a wide array of wavelengths will reveal the distribution of particle sizes in the expanding dust cloud, helping to determine whether it threw off lots of big chunks or mostly fine dust.

Webb took one observation of the impact location before the collision took place, then several observations over the next few hours.

Images from Webb’s Near-Infrared Camera (NIRCam) show a tight, compact core, with plumes of material appearing as wisps streaming away from the center of where the impact took place.

In the Hubble images, astronomers estimate that the brightness of the system increased by three times after impact, and saw that brightness hold steady, even eight hours after impact.

An Earth-based telescope also captured the historic moment the craft smashed into Dimophors.

The ATLAS telescope, based in Honolulu, Hawaii, shows the asteroid as a ball of light in motion and a plume of ejecta that’s emitted as the spacecraft hits.

Similarly, a sped up animation was captured by one of Las Cumbres Observatory’s telescopes in South Africa.

NASA engineers said DART was completely destroyed, but there might be pieces of it in the crater it left during impact – and some of the team said they shed a tear knowing the craft is now gone.

NASA considers any near-Earth object ‘potentially hazardous’ if it comes within 0.05 astronomical units (4.6 million miles) and measures more than 460ft in diameter.

More than 27,000 near-Earth asteroids have been cataloged but none currently pose a danger to our planet.