Look up tonight! NASA reveals how to spot ‘Santa’ in the night sky as the International Space Station passes overhead

Keeping the magic of Santa alive is something parents around the world do for their children every Christmas, and NASA suggests looking up tonight to ‘see him fly’.

It won’t actually be the man in red, rather the International Space Station as it speeds around the Earth at 17,000 miles per hour, orbiting 250 miles above the surface.

The ISS is visible to the naked eye, so no need for binoculars or a telescope to witness it flying overhead, and to someone who believes, it could be Santa travelling the globe, delivering presents to all the good little girls and boys.

For those on the ISS, they create their own ‘space family traditions’ and could do so 16 times on December 25, as the station orbits the Earth every 90 minutes.

For most of the UK it should be visible at about 05:15 GMT on Christmas morning for about 2 minutes, travelling east to south east just above the horizon, or high in the sky an hour and a half later at 06:48 GMT, travelling west south west. 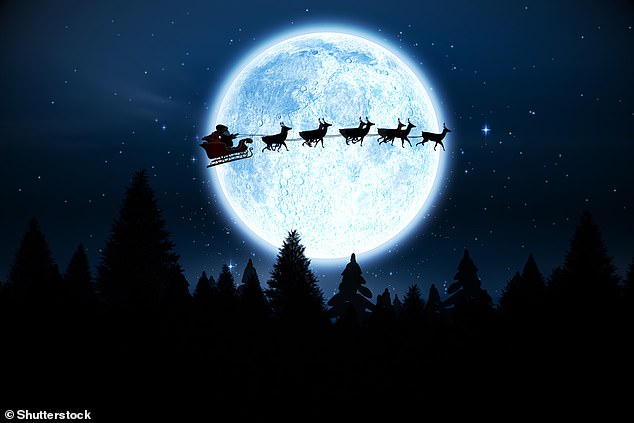 Keeping the magic of Santa alive is something parents around the world do for their children every Christmas, and NASA suggests looking up tonight to ‘see him fly’ 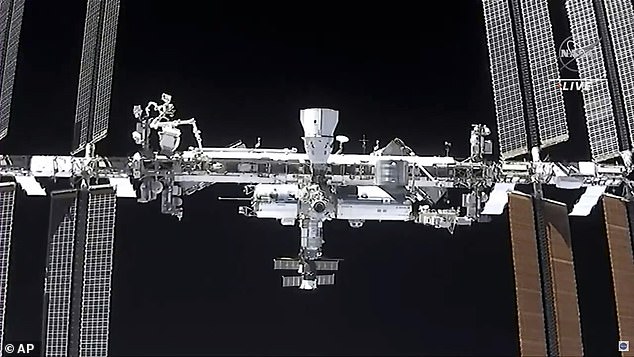 It won’t actually be the man in red, rather the International Space Station as it speeds around the Earth at 17,000 miles per hour, orbiting 250 miles above the surface

For the best view of the ISS you’ll need to find a dark sky area, with minimal to no light pollution, according to NASA, who said it is the ‘third brightest object.’

‘Visible to the naked eye, it looks like a fast-moving plane only much higher and travelling thousands of miles an hour faster!,’ NASA said.

You’ll also be able to distinguish the ISS from a plane by the fact it doesn’t have blinking lights.

Astronauts on the station will be making video calls to their families living across the Earth, and celebrate with colleague on the station.

‘Being in space, being with friends, doing a special job. It is a special Christmas,’ the astronauts said in a NASA video.

The crew on the ISS also celebrate with a turkey dinner and presents, which were delivered by a SpaceX Dragon cargo ship on Wednesday.

The holiday haul also included science gear, such as a British experiment to see how muscles respond to stimulation while in low gravity conditions.

In total the ship contained 6,500lb of research experiments and supplies for the seven astronauts on the station. This will have included presents, as well as a full Christmas dinner, according to NASA.

For those on the ISS, they create their own ‘space family traditions’ and could do so 16 times on December 25, as the station orbits the Earth every 90 minutes

WHEN TO SEE THE ISS AROUND CHRISTMAS

Toronto, Canada: 06:27 ET for 4 mins travelling from north to west.

‘I won’t get in front of Santa Claus and tell you what’s going to be sent up, but we are going to have some gifts for the crew,’ said NASA’s space station program manager, Joel Montalbano.

‘So you can imagine turkey, green beans, we have some fish and some seafood that’s smoked.

‘We also have everybody’s favourite, fruitcake.’

NASA isn’t the only government agency getting in on the Santa tracking task.

NORAD, the North American Aerospace Defense Command, a bi-national agency run by Canada and the US, is also monitoring the path of the jolly gift giver.

For over 60 years, NORAD and its predecessor, the Continental Air Defense Command (CONAD) have tracked Santa’s flight on Christmas Eve.

They begin the tracking at midnight on December 23, and keep users up to date with where he would be expected to be at any given moment in time, during his mission to bring toys to the children of the world.

It is a public outreach programme that operates throughout December, with data available through apps, Google, the NORAD website and over the telephone.