Liftoff! NASA launches its DART mission aboard a SpaceX Falcon 9 rocket to deliberately crash into an asteroid to test Earth’s planetary defenses

NASA’s first ever ‘planetary defence’ mission to deflect an asteroid 6.8 million miles from Earth has launched this morning.

The space agency tweeted the news this morning, writing: ‘And… liftoff! The #DARTMission is now on a nearly one-year journey to crash into a distant asteroid as the world’s first planetary defense test mission.’

Following its 6.8 million-mile journey, DART will smash into the small asteroid Dimorphos, which orbits a larger asteroid called Didymos, at 13,500 miles per hour (21,700 km per hour) in October 2022.

When it hits Dimorphos, the 1,210 pound space probe will change the speed of the 525-foot-wide space rock by a fraction of a per cent.

Although Dimorphos doesn’t pose a danger to Earth, NASA wants to measure the asteroid’s altered orbit caused by the collision.

This demonstration of ‘planetary defence’ will inform future missions that could one day save Earth from a deadly asteroid impact. 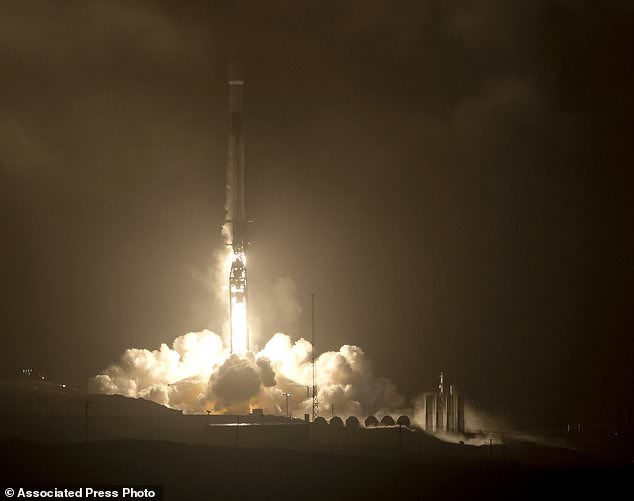 WHAT IS THE NASA DART MISSION?

Then, using Earth-based telescopes to measure the effects of the impact on the asteroid system, the mission will enhance modeling and predictive capabilities to help us better prepare for an actual asteroid threat should one ever be discovered.

‘This isn’t going to destroy the asteroid. It’s just going to give it a small nudge,’ said mission official Nancy Chabot of Johns Hopkins Applied Physics Laboratory, which is managing the project.

The pair are no danger to Earth but offer scientists a way to measure the effectiveness of the collision.

Dimorphos completes one orbit of Didymos every 11 hours, 55 minutes.

DART’s goal is a crash that will slow Dimorphos down and cause it to fall closer toward the bigger asteroid, shaving 10 minutes off its orbit.

The change in the orbital period will be measured by telescopes on Earth. The minimum change for the mission to be considered a success is 73 seconds.

A small nudge ‘would add up to a big change in its future position, and then the asteroid and the Earth wouldn’t be on a collision course,’ Chabot said.

‘Although there isn´t a currently known asteroid that’s on an impact course with the Earth, we do know that there is a large population of near-Earth asteroids out there,’ said Lindley Johnson, planetary defense officer at NASA.

‘The key to planetary defense is finding them well before they are an impact threat.’

DART will take 10 months to reach the asteroid pair. The collision will occur about 6.8 million miles (11 million kilometers) from Earth.

Ten days beforehand, DART will release a tiny observation spacecraft supplied by the Italian space agency that will follow it.

DART will stream video until it is destroyed on impact. Three minutes later, the trailing craft will make images of the impact site and material that is ejected. 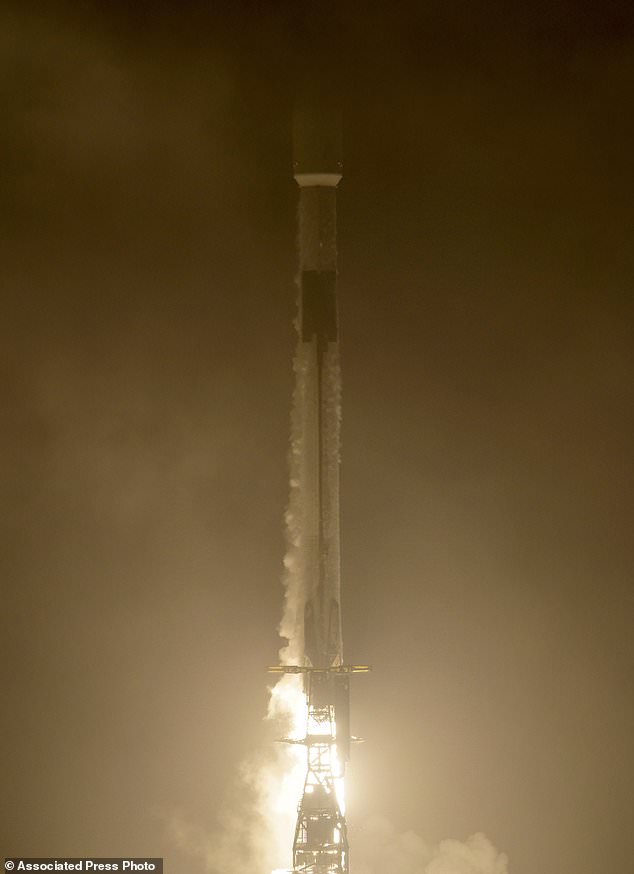 The DART spacecraft, short for Double Asteroid Redirection Test, lifted off from Vandenberg Space Force Base atop a SpaceX Falcon 9 rocket in a $330 million project with echoes of the Bruce Willis movie ‘Armageddon’ 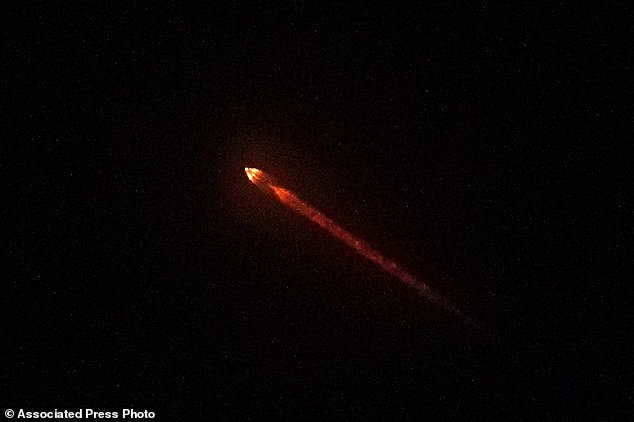 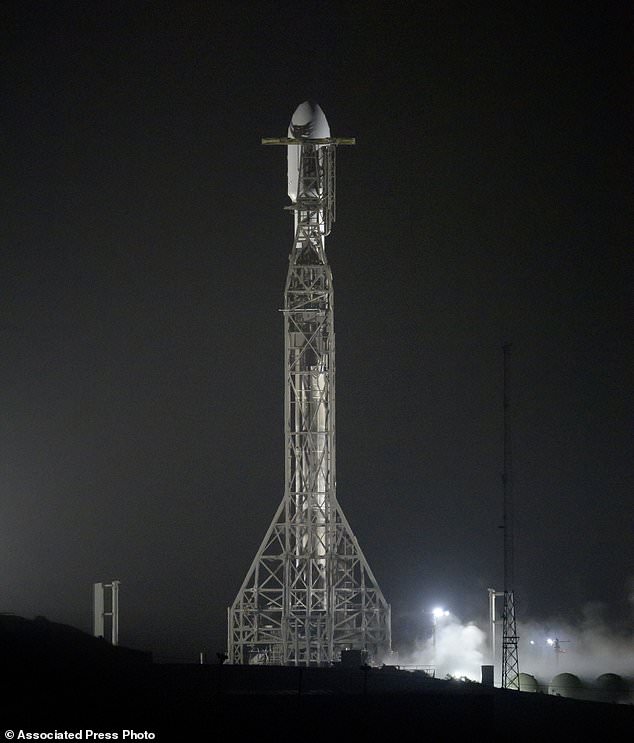 The SpaceX Falcon 9 rocket with the Double Asteroid Redirection Test, or DART, spacecraft onboard, is seen ready for launch, Tuesday, Nov. 23, 2021, at Space Launch Complex 4E, Vandenberg Space Force Base in Calif. DART is the world’s first full-scale planetary defense test, demonstrating one method of asteroid deflection technology. The mission was built and is managed by Johns Hopkins APL for NASA’s Planetary Defense Coordination Office. (Bill Ingalls/NASA via AP) 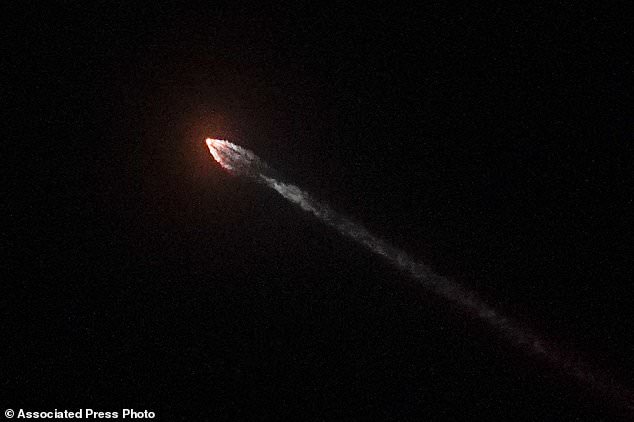 In this image taken from NASA video, the SpaceX Falcon 9 rocket with the Double Asteroid Redirection Test, or DART, spacecraft onboard, lifts off Tuesday, Nov. 23, 2021, from Vandenberg Space Force Base in Calif. NASA launched the spacecraft Tuesday night on a mission to smash into an asteroid and test whether it would be possible to knock a speeding space rock off course if one were to threaten Earth. (NASA via AP)

Bennu, which is about a third of a mile wide, has a slightly greater chance of hitting Earth than previously thought, NASA revealed earlier this month.

Recent KID efforts were outlined at the 84th annual meeting of the Meteoritical Society held in Chicago this month and led by Dr George Flynn, a physicist at State University of New York, Plattsburgh.