Mars DOES experience quakes just like Earth: NASA InSight spacecraft detects 450 quivers in less than a year suggesting the Red Planet could be harbouring alien life

NASA InSight spacecraft proves Mars experiences earthquakes just like Earth and discovers 450 quivers in a year – suggesting there may be life on the Red Planet.

Researchers from around the world have published six papers examining the findings of the £633 million InSight lander’s first 10 months on Mars.

The regular seismic events mean there could be active volcanoes with liquid magma and even water under the planet – creating an environment for organisms to thrive.

Dr Nicholas Schmerr from Maryland University says life exists at the very edge and if there is liquid magma on Mars it might suggest current and active life.

Scientists say understanding more about the seismic activity of planets other than Earth could reveal clues about how the Solar System formed. 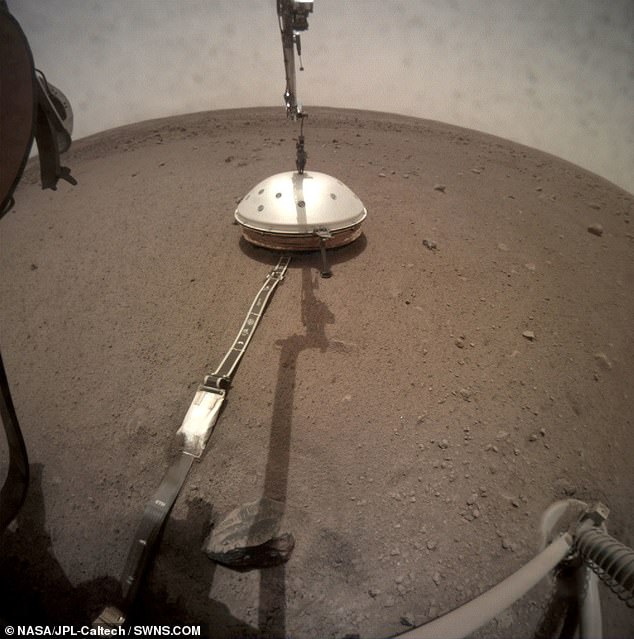 NASA’s InSight lander deployed its seismometer on the Martian surface on Dec. 19, 2018. This image, captured on Feb. 2, 2019 (Martian Sol 66) by the deployment camera on the lander’s robotic arm shows the protective wind and thermal shield which covers the seismometer

InSight was sent to study the deep interior of the Red Planet and touched down in November 2018 – it’s due to operate for another year.

It carries a range of instruments to examine Mars in detail including seismic activity, the atmosphere, wind and temperature fluctuations.

WHAT ARE THE GOALS OF MARS INSIGHT?

To understand how rocky planets formed and evolved, InSight will study the interior structure and processes of Mars by determining:

InSight will figure out just how tectonically active Mars is today, and how often meteorites impact it. For this, it will measure:

The seismic vibrations were detected on Mars thanks to a set of British built silicon sensors in the Seismic Experiment for Interior Structure (SEIS) equipment.

Dr Bruce Barnerdt, InSight principal investigator said: ‘We finally have, for the first time, established that Mars is a seismically active planet.’

The first so-called ‘Marsquake’ was recorded in April 2019. Since then, it has detected more than 450 quivers – tiny quakes much smaller than anything on Earth.

Two of the ‘quivers’ were big enough for scientists to be able to trace them back to their source and wer found in a geologically active area called Cerberus Fossae.

This is about 1,000 miles east of Elysium Planitia where InSight was based.

Researchers say this provides strong evidence that seismic activity on Mars is not only a consequence of the cooling and shrinking of the planet but also caused by tectonic plates running into each other or moving apart.

While InSight hasn’t detected life on the Red Planet, experts including the author of one of the research papers, Dr Schmerr, says future missions could find life.

‘Think of areas on Earth such as the thermal vents at the deep ocean ridges where chemistry provides the energy for life rather than the sun.

‘If it turns out there is liquid magma on Mars – and if we can pinpoint where the planet is most geologically active – it might guide future missions searching for the potential for life.’ 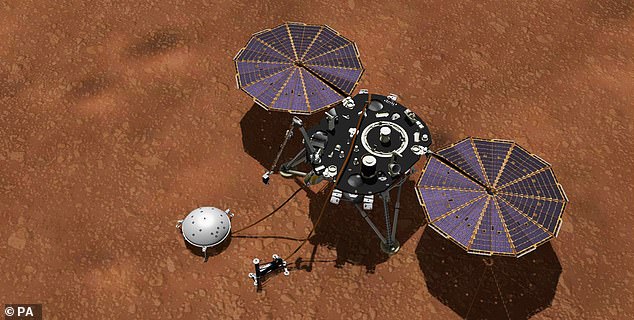 The InSight lander, a Nasa spacecraft was sent to study the deep interior of Mars and has confirmed the planet to be seismically active

The heat could melt pockets of the planet’s subterranean ice – perhaps forming reservoirs of water where there is life as we know it, he said.

Marsquakes are similar to quakes observed on the Moon during the Apollo era, said Dr Domenico Giardini, of ETH Zurich in Switzerland.

WHAT ARE THE KEY FINDINGS ON THE MARSQUAKES?

A number of papers have been published into the findings of InSight.

Each covers a different area including magnetic field, atmosphere, seismicity and the geology of Mars.

‘[They have] a long signal duration (10 to 20 minutes) due to the scattering properties of the Martian crust,’ he said.

The scientists hope reading the seismic waves on Mars will reveal information about what the planet’s interior looks like and how it is changing.

Of the quakes measured on Mars two dozen had a magnitude of 3 to 4 – and came from distant sources.

The location of two were pinpointed to the Cerberus Fossae area – which shows evidence of ‘recent volcanic and tectonic activity’, say the researchers.

On Earth this would be unlikely to damage buildings – but be enough to feel the ground shake and even topple things off cupboards.

‘These low-frequency events were really exciting, because we know how to analyse them and extract information about sub-surface structure,’ said Vedran Lekic.

‘Based on how the different waves propagate through the crust, we can identify geologic layers within the planet and determine the distance and location to the source of the quakes,’ the Maryland astronomer confirmed.

The rest of the quakes produced smaller ground shaking similar to that recorded on the Moon by the Apollo program in the late 1960s and 70s.

‘This is the first mission focused on taking direct geophysical measurements of any planet besides Earth, and it’s given us our first real understanding of Mars’ interior structure and geological processes,’ said Schmerr.

‘These data are helping us understand how the planet works, its rate of seismicity, how active it is and where it’s active.’

Researchers also found Martian weather to be similar to that of Earth but with stronger daily atmospheric pressure and temperature fluctuations.

Dr Don Banfield from Cornell University in the US said the atmosphere is so thin it can heat and cool quicker than Earth’s atmosphere.

This image shows the surface of Mars – the InSight lander, a Nasa spacecraft has confirmed the planet is seismically active which some scientists say suggests there may be life on Mars

Evidence of dust devils, which are whirls of Martian soil whipped up by the wind that spin like a tornado at nearly 60mph, were observed a month after InSight landed.

‘We are working to understand what these waves can teach us about Mars,’ he said.

‘This will likely receive lots of attention over the coming years.’

Mars experiences quakes more often, but also more mildly than expected with the largest measuring 4.0 on the Richter scale.

HOW OFTEN DO DUST STORMS HAPPEN ON MARS AND WHAT’S THE BEST WAY TO SEE THEM?

Dust storms occur frequently on Mars, but global events that circle the entire planet appear every six to eight Earth years, which equates to three to four years on the red planet.

MailOnline spoke to Dr Robert Massey, deputy executive director of the Royal Astronomical Society, for his advice on witnessing this extra-terrestrial weather event.

He said: ‘Observing Mars is always challenging, as it’s small, about half the size of the Earth, and at its closest is still around 34 million miles (55 million km) away.

‘It is easily visible to the eye as a bright red object in the sky, but seeing any detail requires a reasonable telescope and binoculars won’t show much.

‘Even with that, details are fleeting, and depend on a steady terrestrial atmosphere as otherwise turbulence blurs out the view.

‘This is why early Martian observers spent a lot of time making many sketches to try to map the planet’s surface.

‘A good time to look is when Mars is near its opposition, the point when the planet is opposite the sun in the sky and near its minimum distance from the Earth.

‘As it gets dark in the evening, you should look for a bright red object in the southeastern sky.

‘With a decent telescope, observers can see the polar caps growing and shrinking and the dust storms described above. These can rapidly change from being local features to planetwide events.’

Detecting signs of life was the primary mission of the earlier Mars probes, Viking 1 and Viking 2 – each carrying seismometers that provided no useful data.

The Viking 1 instrument did not unlock properly, and Viking 2 only picked up noise from wind buffeting the lander but no convincing marsquake signals.

A robotic arm on the lander placed the SEIS seismometer directly on the Martian ground some distance away to isolate it from the lander.

High winds flowing across the surface of the ground also create a distinct seismic signature, researchers discovered when examining the data.

Combined with information from meteorological instruments, SEIS data help paint a picture of the daily cycles of surface activity near the InSight lander.

The researchers found the winds pick up from about midnight through early morning, as cooler air rolls down from highlands in the Southern Hemisphere onto the Elysium Planitia plains where the lander is located.

During the day, heating from the sun causes convective winds to build.

By evening, the winds die down, and conditions around the lander become quiet.

From late evening until about midnight, atmospheric conditions are so quiet, the seismometer is able to detect the rumblings from deeper inside the planet. 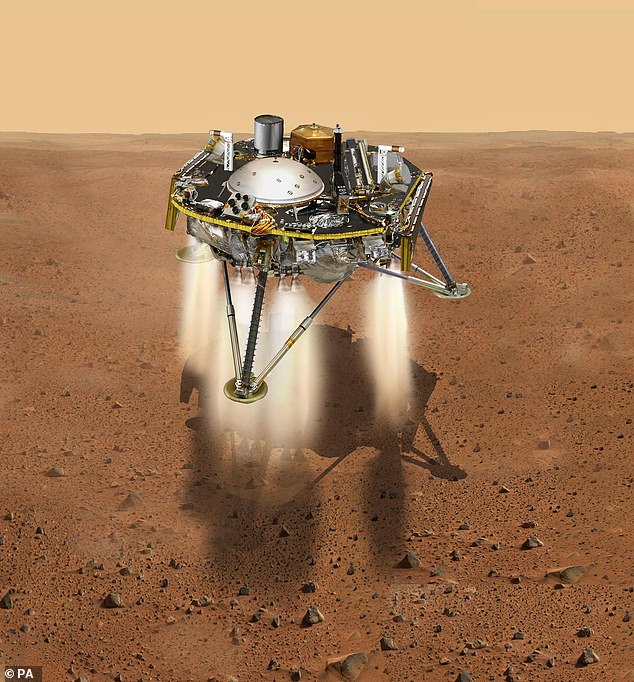 All of the ‘marsquakes’ have been detected during these quiet periods at night, but the geologic activity likely persists throughout the day.

‘What is so spectacular about this data is that it gives us this beautifully poetic picture of what a day is actually like on another planet,’ said Lekic.

They had a £4 million grant from the UK Space Agency to develop the sensors – which had to be sensitive enough to detect motion at sub-atomic scales.

By the end of last year InSight was detecting an average of two quakes every day.

Preliminary findings from InSight’s first 10 months on Mars are published in a series of papers in Nature research journals.

The £633 million NASA mission is expected to continue for another year.

A number of missions are heading to Mars in 2020 to search for life including landers from the European Space Agency (ESA), NASA and the Chinese space agency.

They will primarily be searching for ancient signs of life rather than active life or flows of magma – which could be the subject of a future mission to the Red Planet.

WHAT ARE INSIGHT’S THREE KEY INSTRUMENTS?

The lander that could reveal how Earth was formed: InSight lander set for Mars landing on november 26th

Three key instruments will allow the InSight lander to ‘take the pulse’ of the red planet:

Seismometer: The InSight lander carries a seismometer, SEIS, that listens to the pulse of Mars.

The seismometer records the waves travelling through the interior structure of a planet.

Studying seismic waves tells us what might be creating the waves.

On Mars, scientists suspect that the culprits may be marsquakes, or meteorites striking the surface.

Heat probe: InSight’s heat flow probe, HP3, burrows deeper than any other scoops, drills or probes on Mars before it.

It will investigate how much heat is still flowing out of Mars.

Radio antennas: Like Earth, Mars wobbles a little as it rotates around its axis.

To study this, two radio antennas, part of the RISE instrument, track the location of the lander very precisely.

This helps scientists test the planet’s reflexes and tells them how the deep interior structure affects the planet’s motion around the Sun.