The sun as you’ve never seen it before! Stunning Nasa image captures the superhot particles created by nuclear fusion explosions that are responsible for the Northern Lights

A new Nasa image captures the sun as you’ve never seen it before.

The image shows superhot particles usually invisible to the naked eye erupting from the star’s surface as a series of stunning arched lines.

The particles are the result of nuclear fusion explosions – one of the most powerful events in the universe – that are responsible for the Northern Lights.

The Nasa image was created using a computer model that took a real image of the sun and overlayed it with scientific readings of solar particles. 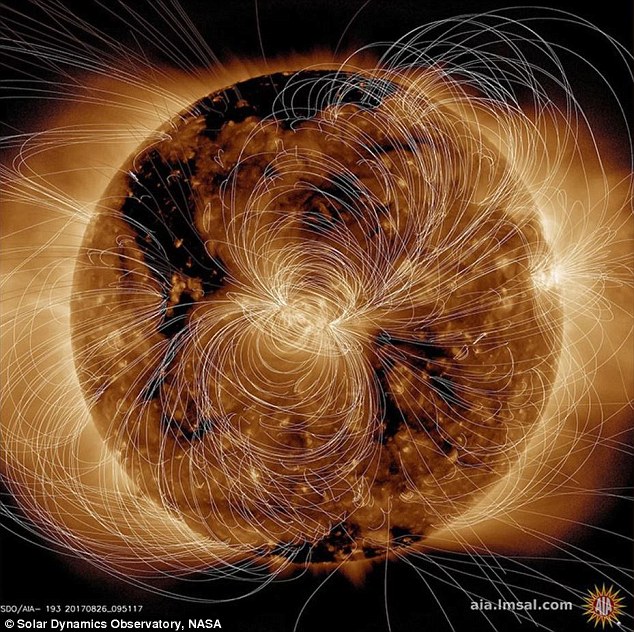 Nasa has captured the sun’s magnetic field erupting with a stunning computer-enhanced image. Using computer models, Nasa has transformed the hidden rays of energy produced by nuclear fusion explosions into golden loops that surround and caress the sun

Some of the loops in the image are shown blasting out into space, forming solar winds and other space weather events that can have impacts on Earth.

These trigger the Northern Lights when they interact with atoms in Earth’s atmosphere, energising and lighting up air particles in vibrant colours.

Others loop back round into the star in closed loops, further building charge at the star’s surface and potentially resulting in larger explosions of space weather.

Readings from Nasa’s Solar Dynamics Observatory (SDO) probe, which orbits and studies the behaviour of the sun, were used to create the image.

Each line represents a powerful electromagnetic eruption resulting from high-energy interactions between the supercharged particles.

Both the sun’s magnetic field and the plasma at the star’s surface are made up of these superhot particles. 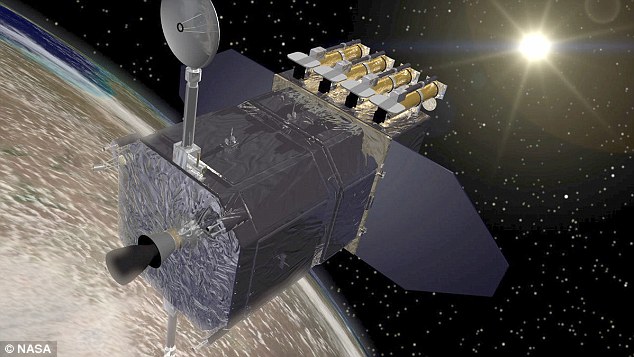 Readings from Nasa’s Solar Dynamics Observatory (SDO) probe (artist’s impression pictured), which orbits and studies the behaviour of the sun, were used to create the image

Nasa said: ‘The bright active region right at the central area of the sun clearly shows a concentration of field lines, as well as the small active region at the Sun’s right edge, but to a lesser extent.

‘Magnetism drives the dynamic activity near the Sun’s surface.’

At the core of the sun temperatures can reach 15 million°C (27 million°F).

WHAT ARE THE AURORAS AND WHAT TRIGGERS THE STUNNING NATURAL DISPLAYS?

The Northern and Southern Lights are natural light spectacles triggered in our atmosphere that are also known as the ‘Auroras’.

There are two types of Aurora – Aurora Borealis, which means ‘dawn of the north’, and Aurora Australis, ‘dawn of the south.’

The displays light up when electrically charged particles from the sun enter the Earth’s atmosphere.

There are two types of Aurora – Aurora Borealis (file photo), which means ‘dawn of the north’, and Aurora Australis, ‘dawn of the south.’ The displays light up when electrically charged particles from the sun enter the Earth’s atmosphere

Usually the particles, sometimes referred to as a solar storm, are deflected by Earth’s magnetic field.

But during stronger storms they enter the atmosphere and collide with gas particles, including hydrogen and helium.

These collisions emit light. Auroral displays appear in many colours although pale green and pink are common.

The celestial ebb and flow of these processes goes widely undetected by humans on Earth as almost all the emissions are outside the visible range of the spectrum.

But thanks to SDO observations, scientists can study the interactions of particles in the sun’s magnetic field, helping experts to pin down the star’s inner workings.

The Solar Dynamics Observatory (SDO) is a Nasa mission that has been observing the sun since 2010.

Its ultra-HD cameras convert different wavelengths of light into an image humans can see, and the light is then colourised into a rainbow of colours.

The satellite launched on February 11, 2010, from Cape Canaveral.

The SDO contains a suite of instruments that provide observations that will lead to a more complete understanding of the solar dynamics that drive variability in the Earth’s environment.

One of the many incredible images the SDO has provided

Among the tasks this set of instruments can achieve is measure ultraviolet light, variances in the sun’s magnetic filed, take images of the chromosphere and inner corona and capture solar variations that may exist in different time periods of a solar cycle.

It does so, using three separate pieces of equipment: the Helioseismic and Magnetic Imager; Atmospheric Imaging Assembly; and Extreme Ultraviolet Variability Experiment.

Science Teams receive this data, which they then process, analyse, archive, and release to the public.