Narcissistic people who were classed as key workers during the pandemic got a thrill out of being dubbed ‘heroes’ when going about their job.

A new study confirms what many exasperated friends and family may have suspected when loved ones were bragging about their own importance during the coronavirus pandemic – that they were getting a kick out of the situation.

The public praise for essential workers – including shop workers, delivery drivers and teachers – acted as a ‘trigger’ for narcissists, researchers say. 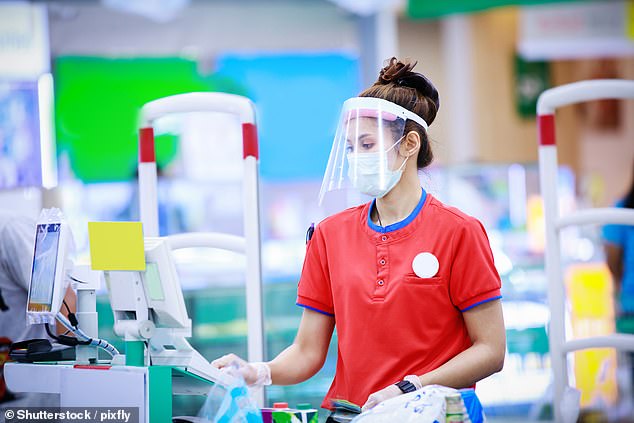 Amy Brunell, co-author of the study and associate professor of psychology at Ohio State University, said: ‘The word “hero” is a trigger for narcissists.

‘Having their work elevated to hero status provides them with an opportunity to shine in front of others and feel even better about themselves.’

The study was based on online surveys of 312 people who considered themselves to be essential workers.

The most common job position listed was working in a convenience/grocery store.

The questionnaires determined their personality type and also their feelings about their role.

It found that people identified as ‘communal narcissists’ or ‘agentic narcissists’ were more likely to discuss their work on social media.

Communal narcissists believe they are better at contributing to a bigger goal than other people, whereas agentic narcissists are the stereotypical show-offs that seek out and hog the limelight

‘[Communal narcissists] think they are the best at being helpful and caring for others. The pandemic gave them a chance to stand out,’ Dr Brunell said.

Argentic narcissists got their thrills from the ‘hero status’ they were given which ‘gave them a way to feel admired and distinct from others’, the researchers say.

Narcissists who bragged about their work on social media revealed the posting made them feel even better about themselves.

As a result, they were more likely to agree with statements like ‘right now, I greatly enrich others’ lives’ and ‘Right now, I feel like I am a special person.’

The findings are available in the journal Personality and Individual Differences.

Calling someone a narcissist is generally insulting, but a new study suggests the label could be desirable for employers.

Researchers at Huazhong University of Science and Technology in Wuhan, China have linked narcissistic personality traits to higher energy levels in the work place and were more well regarded by their supervisors.

People with more narcissistic personality traits also tended to take leadership roles more readily than other workers, whether asked or not, according to the researchers, led by Huazhong University’s Kong Zhou.

‘We argue that narcissistic employees usually have stronger internal motivations to release the potential energy stored in their bodies as to prove they are better than other employees,’ the team writes.

‘Hence, we predict that narcissistic employees may be more energized to exhibit taking-charge behavior in the workplace.’