Mystery around why jets shooting out of black holes are so bright is SOLVED: New orbiting observatory finds particles in streams become energized by shock waves moving at supersonic speed

Luminous jets released by black holes located in the center of galaxies has baffled scientists for 40 years, but a new orbital observatory finally solved this mystery.

Using data from the Imaging X-ray Polarimetry Explorer (IXPE) orbiting observatory, researchers determined that the brightness is created by the subatomic particles called electrons that become energized by shock waves moving at supersonic speed away from the black hole.

The researchers studied an exotic object called a blazar, a massive disc of material around a black hole, at the center of a giant elliptical galaxy named Markarian 501 located about 460 million light years away from Earth.

The data showed that particles in the jet become energized when hit with a shock wave propagating outward inside the stream and emit X-rays as they accelerate. 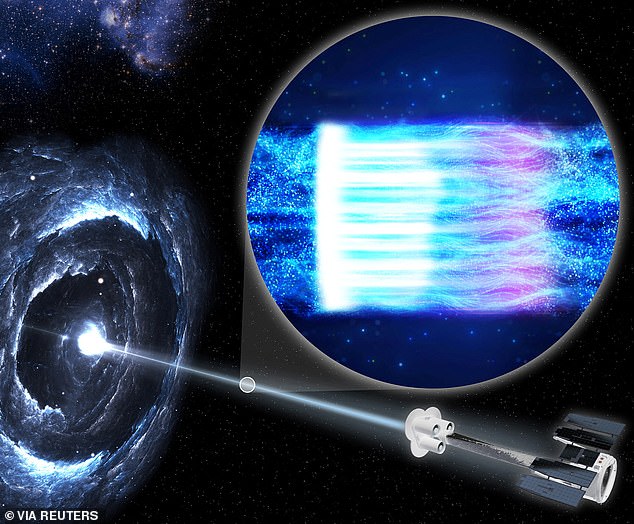 At the center of most galaxies, including our own, sits a supermassive black hole that creates a disk of gas, dust and stellar debris.

As material in the disk falls toward the black hole, its gravitational energy can be transformed into light, making the centers of these galaxies very bright and becoming called active galactic nuclei (AGN).

And when a galaxy is situated in a way that its jets point toward Earth, it is called a blazar.

Boston University astrophysicist and study co-author Alan Marscher, said in a statement: ‘The light that we see from the jets comes from electrons.

‘X-rays of the type we observe in Markarian 501 can only come from extremely high-energy electrons.’

IXPE launched on December 9, 2021, in collaboration with NASA and the Italian Space Agency.

Unlike current orbiting observatories, IXPE can take measurements of X-ray light’s polarization, which is the average distance and intensity of the electric field of light waves that make up X-rays, NASA shared in a statement. 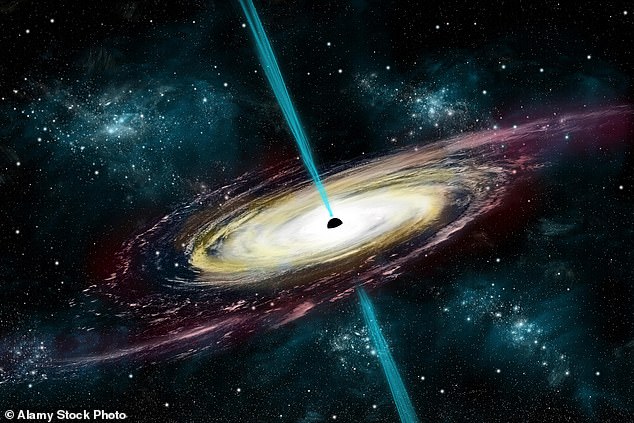 The disc is known as a blazar and jets that shoot out from black holes at the center are blazingly bright. This is because the electrons in the stream become energized by shock waves moving at supersonic speed away from the black hole

Immacolata Donnarumma, the project scientist for IXPE at the Italian Space Agency, said in a statement: ‘The first X-ray polarization measurements of this class of sources allowed, for the first time, a direct comparison with the models developed from observing other frequencies of light, from radio to very high-energy gamma rays.

What are black holes?

How they are formed is still poorly understood. Astronomers believe they may form when a large cloud of gas up to 100,000 times more significant than the sun collapses into a black hole.

Many of these black hole seeds then merge to form much larger supermassive black holes, which are found at the center of every known massive galaxy.

When these giant stars die, they also go ‘supernova,’ a vast explosion that expels the matter from the star’s outer layers into deep space.

‘IXPE will continue to provide new evidence as the current data is analyzed and additional data is acquired in the future.’

The team pointed IXPE toward Markarian 501 for three days in early March of 2022, and then again two weeks later.

Other telescopes, both in space and on the ground, also collected observations about the blazar in a wide range of wavelengths of light, including radio, optical and X-ray.

Blazars are a subset of objects called quasars that are powered by supermassive black holes feeding on gas and other material at the center of galaxies and sending two jets of particles in opposite directions into space.

And they are oriented such that one of their two jets from our vantage point on Earth is heading directly at us.

Astronomer Yannis Liodakis of the Finnish Centre for Astronomy with ESO, lead author said in a statement: ‘Blazars are the most persistently bright objects in the observable universe.

‘They are the most energetic. They have the biggest, scariest black holes. Everything that happens around them is so fascinating.’

Scientists have long sought to understand how the jets launched from blazars become so luminous and the behavior of the particles in them.

The jets from this blazar extend to a distance of about a million light years.

The study was not designed to investigate the origins of shock waves, which are still mysterious. But scientists hypothesize that a disturbance in the flow of the jet causes a section of it to become supersonic.

This could result from high-energy particle collisions within the jet or abrupt pressure changes at the jet boundary.

‘As the shock wave crosses the region, the magnetic field gets stronger, and energy of particles gets higher,’ Marscher said. ‘The energy comes from the motion energy of the material making the shock wave.’