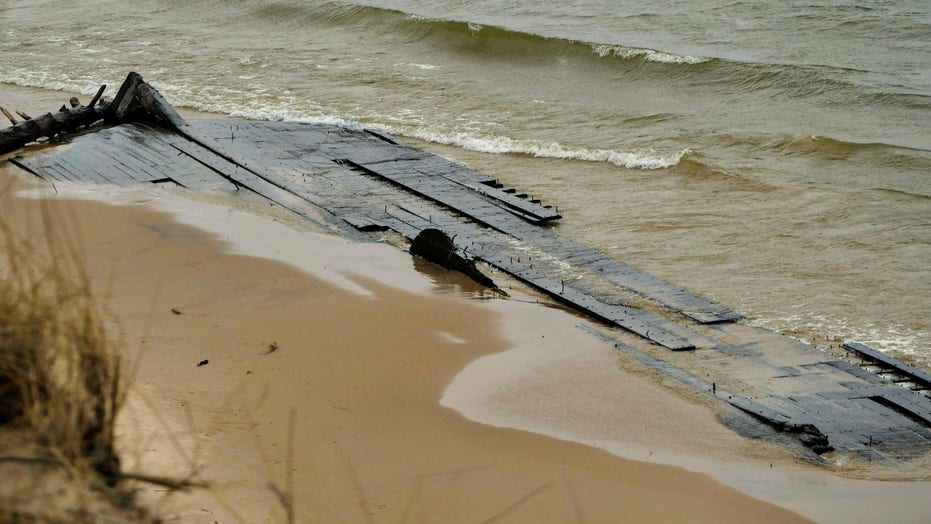 New photos show a mysterious shipwreck slowly ‘disappearing’ into Lake Michigan. Up to half of the wreck has now been reclaimed by the Great Lake, according to researchers.

The wreck, which is believed to have sunk in the 1930s, was recently uncovered by a Lake Michigan storm surge.

However, the Great Lake has been slowly reclaiming the wreck. On Sunday, John Hanson of the West Michigan Underwater Preserve (WMUP) told Fox News that the wreck has turned 180 degrees and is now about one third to half reburied in the sand.

Citing the WMUP, the news station WWMT recently reported that the wreck is expected to be completely underwater in “a matter of months.” 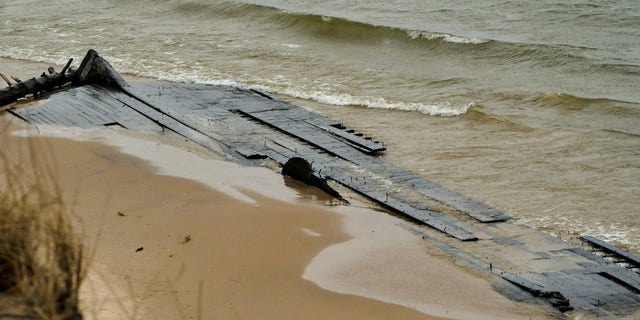 The wreck is about one third to a half reburied in the sand, according to the West Michigan Underwater Preserve (WMUP).
(Lori Adelson)

The WMUP, which partners with the state of Michigan to preserve shipwrecks and coastal artifacts, told Fox News last year that the wreck is likely a barge that sank in the 1930s.

The barge is thought to have been hauling a 1915 Bucyrus Erie Steam Crane when it started taking on water, according to WMUP. Researchers found the wreckage of the crane eight years ago by plotting the GPS numbers, and the wreck is now a marked dive sight. 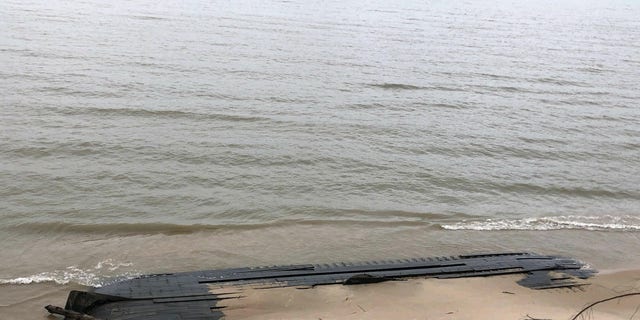 The wreck is slowly being reclaimed by Lake Michigan.

The Great Lakes continue to reveal their shipwreck secrets. The remarkably intact wreck of a schooner that sank in 1891 was recently discovered in Lake Michigan.

Two Civil War-era schooners that collided and sank more than 140 years ago were also recently discovered near Beaver Island in northern Lake Michigan.

The wreck of a steamer has also been discovered 103 years after it was struck by a massive wave and sank in Lake Superior. In 2019, the Great Lakes Shipwreck Museum announced the discovery of the wreck of the S.R. Kirby off the Keweenaw Peninsula on Michigan’s Upper Peninsula.

Researchers found what appeared to be wreckage near Eagle Harbor, Mich., in 2018 and returned to identify the wreck with an underwater drone last year. Also in 2018, experts said that a shipwreck discovered in Lake Erie in 2015 may be the oldest found in the famous lake.

In addition, researchers in 2018 announced the discovery of the 119-year-old shipwreck Margaret Olwill at the bottom of Lake Erie. The wooden steam barge sank during an 1899 nor’ easter.

In May 2008, two explorers discovered the British warship HMS Ontario, which was lost in Lake Ontario in 1780. The HMS Ontario is the oldest shipwreck ever found in the Great Lakes and the only British warship of this period still in existence in the world.

In 2016, Kennard was also part of a team of underwater explorers that discovered the second-oldest confirmed shipwreck in the Great Lakes. The Washington, an American-built, Canadian-owned sloop, sank in Lake Ontario during a fierce storm in 1803.