Mysteriously bright flash that gave off more light than 1,000 TRILLION suns was caused by a star being ‘squeezed like a toothpaste tube’ by a supermassive black hole, study finds

A mysteriously bright light in the sky was caused by a distant star being ‘squeezed like a toothpaste tube’ by a supermassive black hole, a study has found.

Astronomers at the Zwicky Transient Facility in California were mystified when they detected a flash that gave off more light than a trillion suns back in February.

Now, the team has revealed that the light was the result of a tidal disruption event (TDE), where a star wanders a little too close to a black hole and is ripped apart by its gravitational forces.

It is being dubbed one of the most violent events in the universe – reaching 54,000°F (30,000°C) – and is the brightest TDE ever witnessed from Earth. 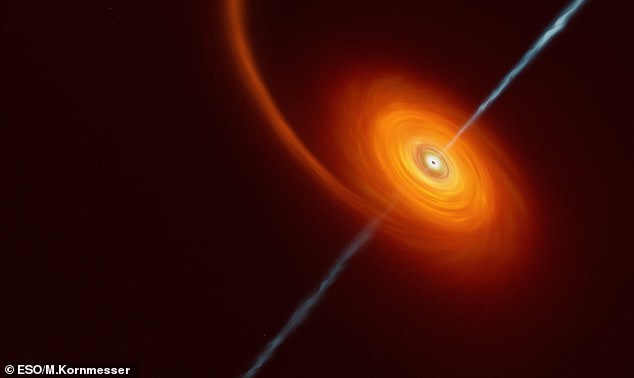 Astronomers at the Zwicky Transient Facility in California were mystified when they detected a flash that gave off more light than a trillion suns back in February. Pictured: Artist’s impression of a TDE

When a star gets too close to a black hole, it undergoes ‘spaghettification’ – where it is stretched vertically and compressed horizontally by the strong gravitational field.

These are known as a tidal disruption events, or TDEs, and emit light, radio and other waves for up to a few weeks or months while they occur.

This is because, eventually, the elongated material spirals around the black hole and heats up, creating a flash that astronomers can detect millions of light years away.

The event has been named AT2022cmc, and occurred more than eight billion light-years away – over halfway across the universe – making it the furthest TDE ever detected.

Data collected from it could help shed new light on how supermassive black holes feed and grow.

The flash was first detected during a routine all-sky survey, and was identified as a jet of light pointing directly toward Earth, known as a ‘jetted TDE’.

After the star was destroyed, an outflow of matter streaked out of the black hole at close to the speed of light, extending along its axis of rotation.

This emitted X-ray radiation, which was absorbed by dust surrounding the black hole, and re-emitted as infrared radiation, radio waves and visible light.

The jet’s unusual brightness and alignment towards Earth allowed instruments across the world to capture it in extraordinary detail, despite its huge distance away from us.

These included the Liverpool Telescope in Spain and European Southern Observatory’s Very Large Telescope in Chile.

Nial Tanvir from the University of Leicester, who was involved with the analysis, said: ‘We have only seen a handful of these jetted-TDEs and they remain very exotic and poorly understood events.’ 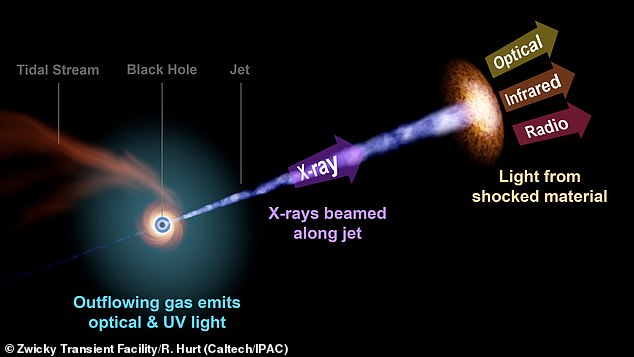 After the star was destroyed, an outflow of matter streaked out of the black hole at close to the speed of light, extending along its axis of rotation. This emitted X-ray radiation, which was absorbed by dust surrounding the black hole, and re-emitted as infrared radiation, radio waves and visible light 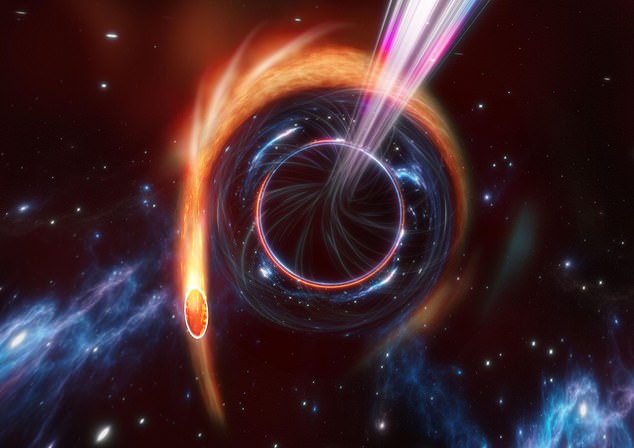 The jet’s unusual brightness and alignment towards Earth allowed for instruments across the world to capture it in extraordinary detail, despite its huge distance away from us

A star more than more than eight billion light-years away from Earth wandered too close to a black hole, and was sucked in.

After it was destroyed, an outflow of matter from the dying star extended along the black hole’s axis of rotation, and emitted X-ray radiation.

The X-rays were absorbed by dust surrounding the black hole, and re-emitted as infrared radiation, radio waves and visible light.

Dr Daniel Perley, a co-author from Liverpool John Moores University, said that AT2022cmc was an ‘extraordinary’ type of TDE that ‘didn’t seem to match any known type of celestial source’.

He said: ‘The most known types of explosions are either much faster, much slower, or much bluer in colour than inferred from the data.

‘Usually, intense gravitational forces tear the star apart, transforming it into a superheated disk of gas which eventually disappears into the black hole.

‘However, in this case, something happened that ejected matter almost at the speed of light back into space.

‘The way we describe it is as a toothpaste tube being squeezed suddenly in the middle causing the contents to squirt matter out of both ends.

‘Then, as the material collides with surrounding gas, the intense optical, radio, and X-ray emission is produced.’

The research team were able to ‘catch this event right at the beginning, within one week of the black hole starting to feed on the star’, according to co-author and astrophysicist at the Massachusetts Institute of Technology (MIT) Dr Dheeraj Pasham.

It also marked the first time a jetted TDE has been detected from optical light.

Dr Perley added: ‘Until now, the small number of jetted-TDEs that are known were initially detected using high energy gamma-ray and X-ray telescopes.’ 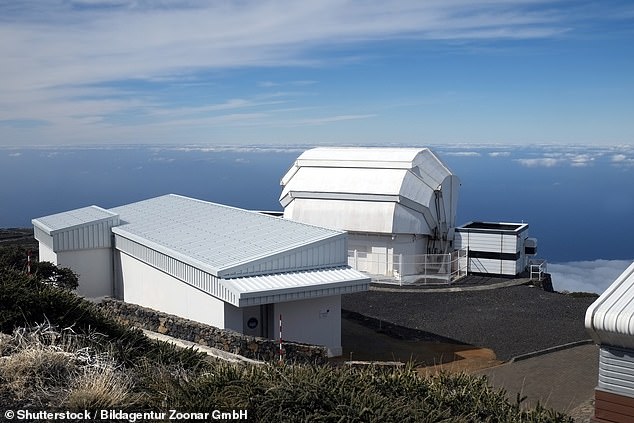 AT2022cmc marks the first time a jetted TDE has been detected from optical light. Pictured: Liverpool Telescope in Spain, which picked up some radiation from the jetted TDE

After the initial discovery of AT2022cmc, researchers looked at it with the Interior Composition ExploreR (NICER), an X-ray telescope on board the International Space Station.

They found that the source of the radiation was 100 times more powerful than the strongest ones ever detected.

Dr Benjamin Gompertz, from the University of Birmingham and who led this analysis, said: ‘As bright as they are, there is only so much light a collapsing star can produce.

‘Because AT 2022cmc was so bright and lasted so long, we knew that something truly gargantuan must be powering it – a supermassive black hole.’

His team concluded that the extreme X-ray activity is the result of the shredded star creating a whirlpool of debris as it fell into the black hole.

‘It’s probably swallowing the star at the rate of half the mass of the sun per year,’ Dr Pasham estimates. 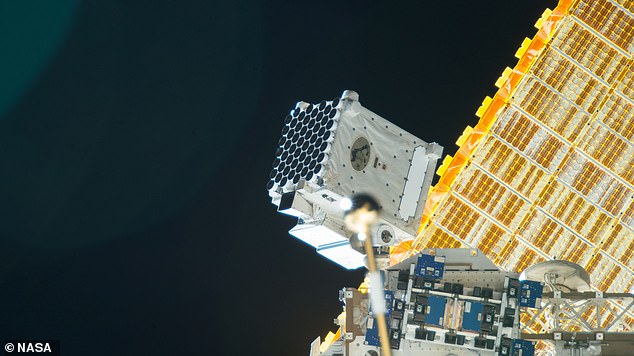 After the initial discovery of AT2022cmc, researchers looked at it with the Interior Composition ExploreR (NICER), an X-ray telescope that operates aboard the International Space Station (pictured)

The results of the analysis of AT2022cmc have been published today in two papers in Nature and Nature Astronomy.

The last time scientists detected a jetted TDE was well over a decade ago, and it is still a mystery as to why some TDEs launch jets and some do not.

It is thought to be linked to the rate the star’s matter is spinning around the black hole as it is destroyed, and a particularly rapid spin can power the luminous jets.

As more powerful telescopes are launched, astronomers say they may be able to observe more TDEs and get some answers.

Dr Dr Matteo Lucchini, a co-author from MIT said: ‘We expect many more of these TDEs in the future.

‘Then we might be able to say, finally, how exactly black holes launch these extremely powerful jets.’