Listening to Mozart’s Sonata for Two Pianos once a day can help to reduce the number of seizures in patients with epilepsy, study shows

Listening to Mozart’s Sonata for Two Pianos once a day can help to reduce the number of seizures in patients with epilepsy, a study has shown.

Researchers from Canada found that the beneficial effect of the composition by the Austrian maestro is not conferred by a similar, scrambled version of the piece.

One of history’s most noted composers, Wolfgang Amadeus Mozart wrote more than 600 musical compositions in his career that spanned from 1764–1788.

Affecting some half a million people in the UK, epilepsy is the most common serious neurological disorder — and causes one to experience regular crippling seizures.

These come in more than 40 different types — with some patients experiencing convulsions and memory loss while others draw a blank and become confused.

While there are a number of medications available to help control epileptic seizures, such are not fully effective in around 30 per cent of cases. 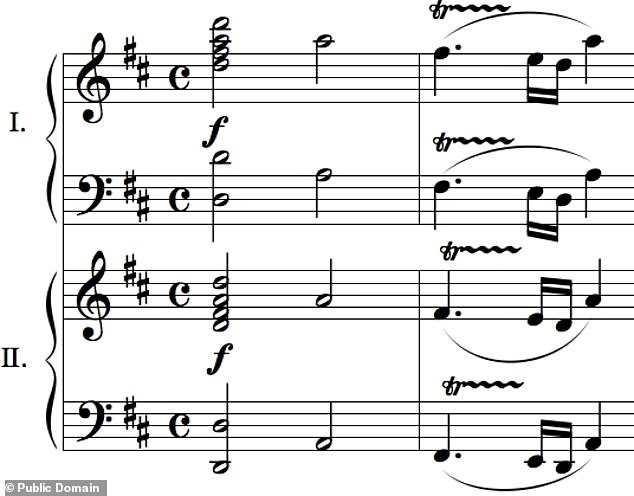 Listening to Mozart’s Sonata for Two Pianos once a day can help to reduce the number of seizures in patients with epilepsy, a study has shown. Pictured, the sonata’s opening

The ‘Mozart Effect’ is the name given to the alleged beneficial effects of the artist’s work on one’s health and IQ.

It originated in a 1993 paper which concluded that listening to Mozart’s Sonata for Two Pianos could increase ‘spatial intelligence’, rather than IQ, over a period of around 15 minutes.

Subsequent studies have also suggested that the sonata — along with another of Mozart’s compositions, the Piano Concerto No. 23 — can help reduce the frequency of seizures experienced by patients with epilepsy.

To date, only one other song has been found by researchers to have a similar effect — that of a version of ‘Acroyali/Standing in Motion’ by the modern Greek composer Yiannis Chryssomallis (known professionally as ‘Yanni’) that was performed live at the Acropolis in 1994.

The song notably has many similarities to Mozart’s Sonata for Two Pianos — including its tempo and structure.

‘In the past 15–20 years, we have learned a lot about how listening to one of Mozart’s compositions in individuals with epilepsy appears to demonstrate a reduction in seizure frequency,’ said paper author Marjan Rafiee, of the Toronto Western Hospital.

‘But, one of the questions that still needed to be answered was whether individuals would show a similar reduction in seizure frequency by listening to another auditory stimulus — a control piece — as compared to Mozart.’

Written in 1781 — when the artist was aged just 25 — for a performance with fellow pianist Josepha Auernhammer, the three-movements-long galant-style piece is one of Mozart’s few compositions made for two pianos.

In the second part of the study, participants were asked instead to listen to a ‘scrambled version’ of the sontata, which had similar features, but had been randomly shuffled and lacked rhythm.

During the study, the participants’ anti-seizure medications were kept constant and the volunteers also kept diaries of their seizures to track their frequency.

‘Our results showed daily listening to the first movement of Mozart K.448 was associated with reducing seizure frequency in adult individuals with epilepsy,’ explained Dr Rafiee.

‘This suggests that daily Mozart listening may be considered as a supplemental therapeutic option to reduce seizures in individuals with epilepsy.’

‘As a surgeon, I have the pleasure of seeing individuals benefit from surgery,’ said paper author Taufik Valiante of the University of Toronto.

‘However, I also know well those individuals for whom surgery is not an option, or those who have not benefited from surgery, so, we are always looking for ways to improve symptom control and improve quality of life for those with epilepsy.’

‘Like all research, ours raises a lot of questions that we are excited to continue to answer with further research and support from the epilepsy community.’

With their initial study complete, the researcher are now looking to repeat the investigation with a larger cohort of patients and over a longer time-span to build on the promising results.

The full findings of the study were published in the journal Epilepsia Open. 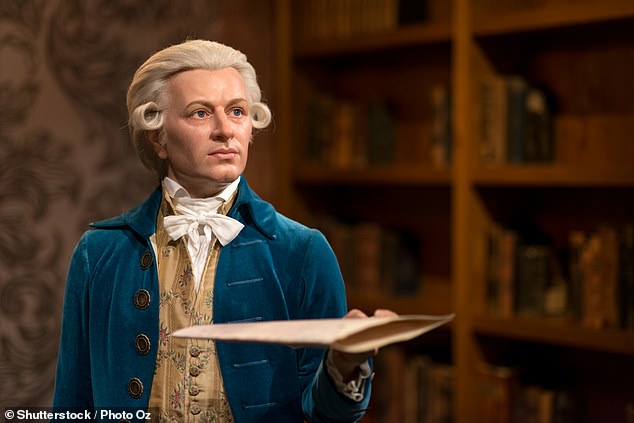 One of history’s most noted composers, Wolfgang Amadeus Mozart (depicted in this Wax sculpture in the collections of Madame Tussauds Istanbul) wrote more than 600 musical compositions in his career that spanned from 1764–1788

Epilepsy is a condition that affects the brain and leaves patients at risk of seizures.

Around one in 100 people in the UK have epilepsy, Epilepsy Society statistics reveal.

And in the US, 1.2 per cent of the population have the condition, according to the Centers for Disease Control and Prevention.

Anyone can have a seizure, which does not automatically mean they have epilepsy.

Usually more than one episode is required before a diagnosis.

Seizures occur when there is a sudden burst of electrical activity in the brain, which causes a disruption to the way it works.

Some seizures cause people to remain alert and aware of their surroundings, while others make people lose consciousness.

Some also make patients experience unusual sensations, feelings or movement, or go stiff and fall to the floor where they jerk.

Epilepsy can be brought on at any age by a stroke, brain infection, head injury or problems at birth that lead to lack of oxygen.

But in more than half of cases, a cause is never found.

Anti-epileptic drugs do not cure the condition but help to stop or reduce seizures.

If these do not work, brain surgery can be effective.