Moving to Mars: From spacesuits and transport to food and shelter – designers reveal their visions for how humans will live on the Red Planet

Sci-fi writers have long dreamed of turning Mars into a more Earth-like planet for future colonisation.

From the first photographic fly-by of Mars by the Mariner 4 spacecraft in 1965 to NASA’s Orion project and Elon Musk’s SpaceX venture, getting humans to the Red Planet has become one of the greatest challenges and preoccupations of our time.

But conditions on Mars are deeply hostile to humans. It is too cold to maintain water and there is no ozone layer to shield against UV radiation.

This means that sending humans to live there will be not just a new frontier for science, but also for design.

Every detail of this extraordinary venture must be planned out – from the journey, which takes around seven months, to considering what we will wear, eat and shelter in when we get there. 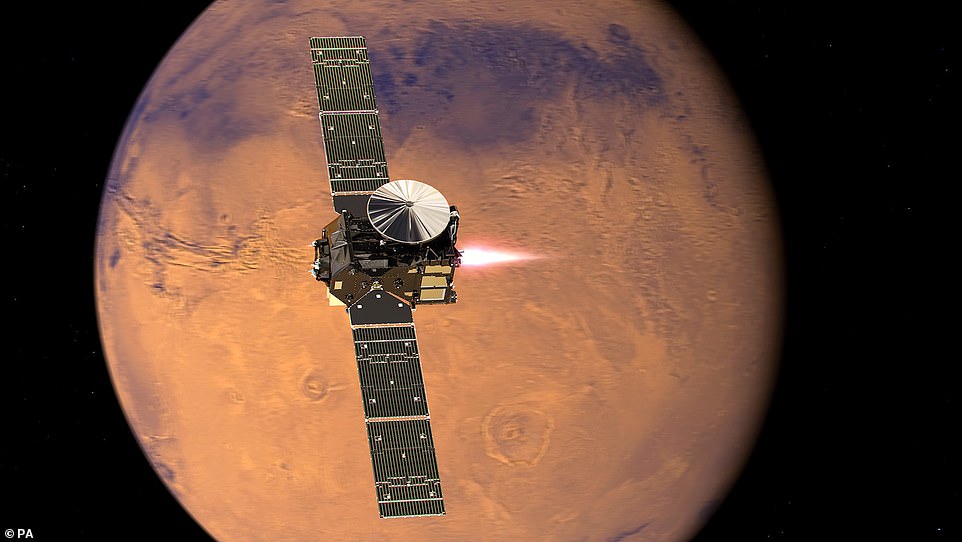 Europe’s ExoMars Rover will be launched with NASA’s rover Mars 2020 in March. Pictured, an artist’s impression of the ExoMars Trace Gas Orbiter and its entry, landing and descent module

The role that design will play in humanity’s journey to the Red Planet is explored in an exhibition entitled ‘Moving to Mars’, running at the Design Museum in London until 23 February 2020.

‘The interesting thing about going to Mars is that it is a total design project,’ Eleanor Watson, Curator of Moving to Mars, told MailOnline.

‘Every single aspect of the mission and life on the planet needs to be thought out, meaning that a huge number of designers are working on the subject in very different ways.

‘In the exhibition we manage this by looking at the various stages of our likely roadmap to Mars, from the voyage, to surviving on the planet in the immediate, to possible outcomes in terms of the planet’s long-term future, and using each of these stages to look at what designers can bring to the conversation.’

In an exclusive feature for MailOnline, Ms Watson offers her pick of the most innovative designs in the exhibition – from the first spacesuit designed for Mars, to a 3D-printed Martian home, and fashion made from space blankets.

The 3D-printed shell structure is constructed from Martian regolith and contains lightweight inflatable pods that have been prefabricated on Earth.

Internal spaces include a state of the art laboratory, a fully-equipped workshop with digital fabrication facilities, a hydroponic greenhouse, and sleeping chambers containing gym facilities and immersive virtual reality platforms. 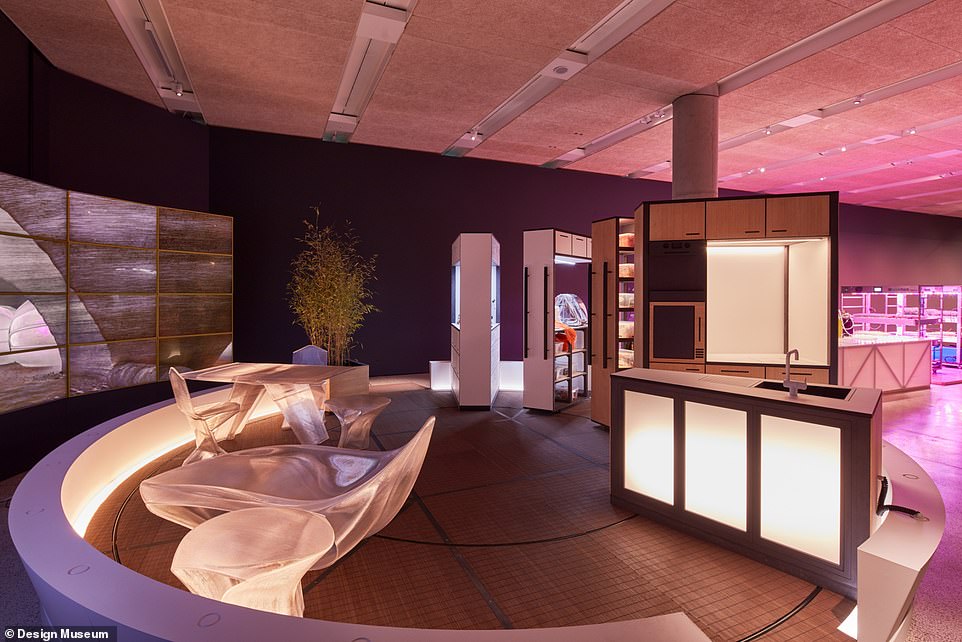 ‘We feature a huge number of architectural proposals in the exhibition, showcasing different concepts for the type of house we might live in on Mars,’ said Watson.

‘While it’s nice to see the overall form of these buildings we thought it would be even better if visitors could step inside, so we collaborated with architecture firm Hassell to produce a full-scale version of one module from their Mars habitat proposal.

‘It’s really interesting being able to see the level of detail that needs to go into a Mars habitat, from the radiation shielding to the flexible storage systems inside.

‘One detail I especially like in Hassell’s proposal is the use of bamboo for the flooring and shelving units. 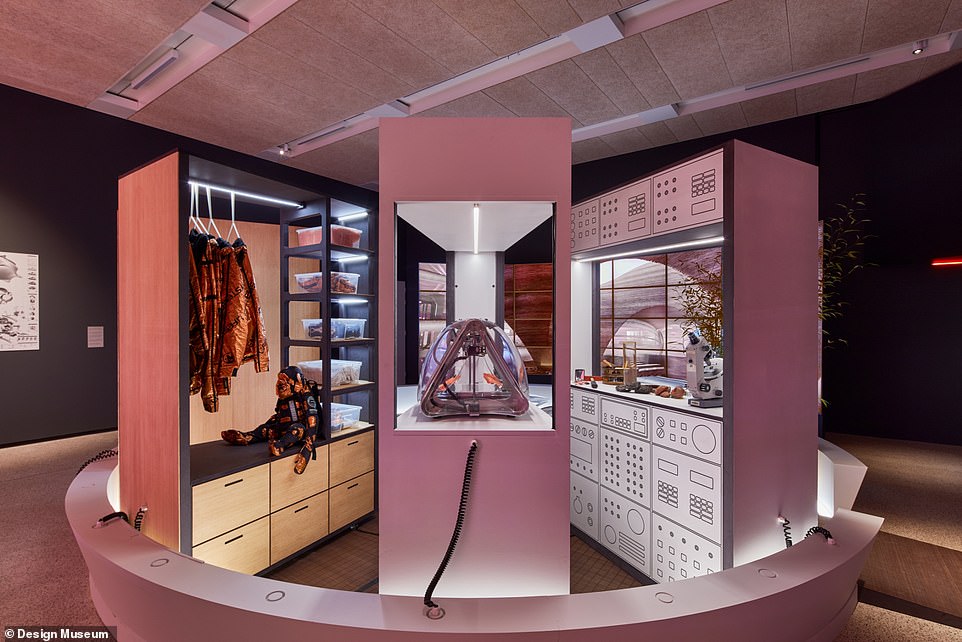 ‘After speaking with people who had spent time in extreme, enclosed environments, the architects learnt that something people really miss is variety in texture.

‘These spaces are usually highly functional, with plastic and metal interiors that are easy to clean and maintain, but people need to be stimulated and generally appreciate having warm textures inside their homes.

‘Bamboo is perfect for this as it grows extremely quickly, has high tensile strength and can be used for a variety of home furnishings.

‘The idea is that astronauts could bring a few bamboo plants along with them, grow them in their habitat and then cut them and use them for making furniture as needed.’ 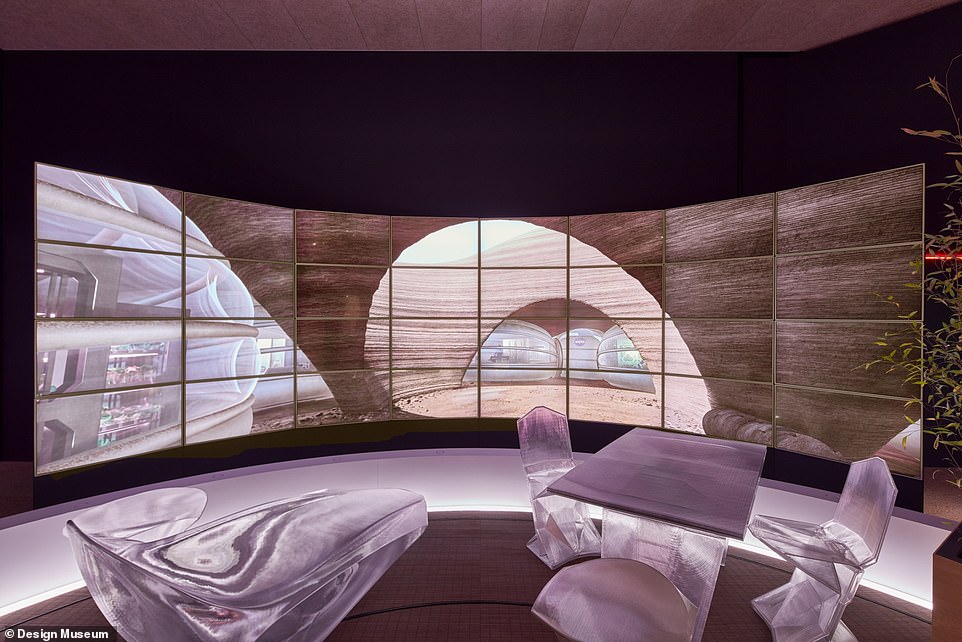 Map of Mars by Giovanni Schiaparelli, 1877

‘No single person has influenced our perception of Mars more than the Italian astronomer Giovanni Schiaparelli,’ said Watson.

‘He transformed the planet from an abstract red dot in the sky into a place, a destination, by publishing a series of highly detailed maps, the original manuscript of which we have in the exhibition.

‘Schiaparelli famously described the dark lines he saw on the planet’s surface as “canali”, which was rather disastrously translated as “canals” rather than “channels” and led to much of the Western world believing that there were, or had been, intelligent beings on Mars.

‘The idea was that the planet was slowly drying out, and that the Martian population had built a system of canals to draw water from the poles to irrigate the rest of the planet – whether or not they had been successful was up for debate.’ 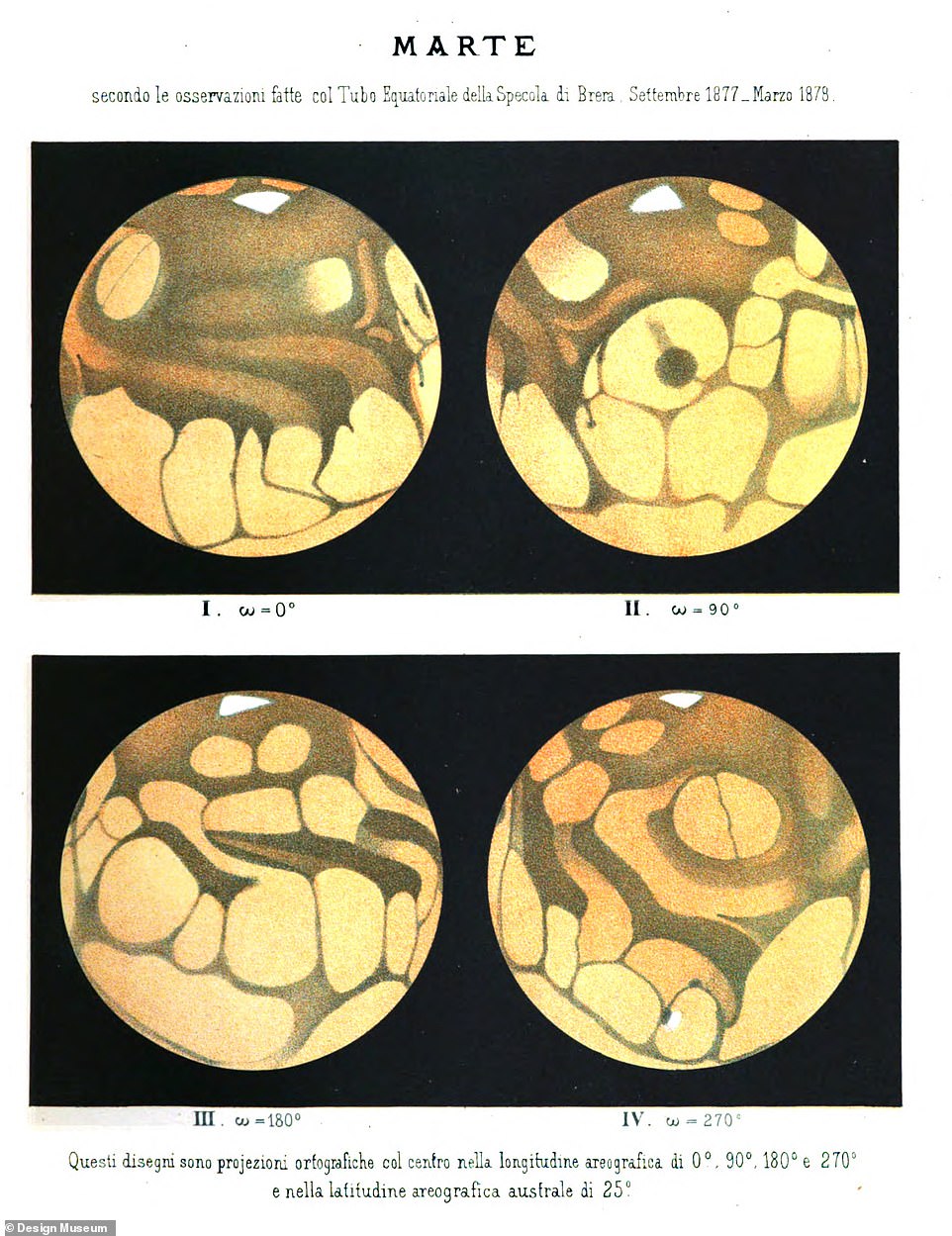 Schiaparelli’s described the dark lines on the planet’s surface as ‘canals’, which many misinterpreted as signs of intelligent beings on Mars

Bridget has formed much of the basis for the Rosalind Franklin rover – the first Mars rover designed specifically to find evidence of Martian life, past or present.

‘The best part about working on the Mars exhibition has been coming into contact with some fantastically talented and interesting people, who have been very generous in sharing their knowledge and expertise with us,’ said Watson.

‘Key among these is the staff at the European Space Agency, who have lent us a full-scale model of the ExoMars Rosalind Franklin Rover, which is the next rover being sent off to Mars in Spring of 2020. 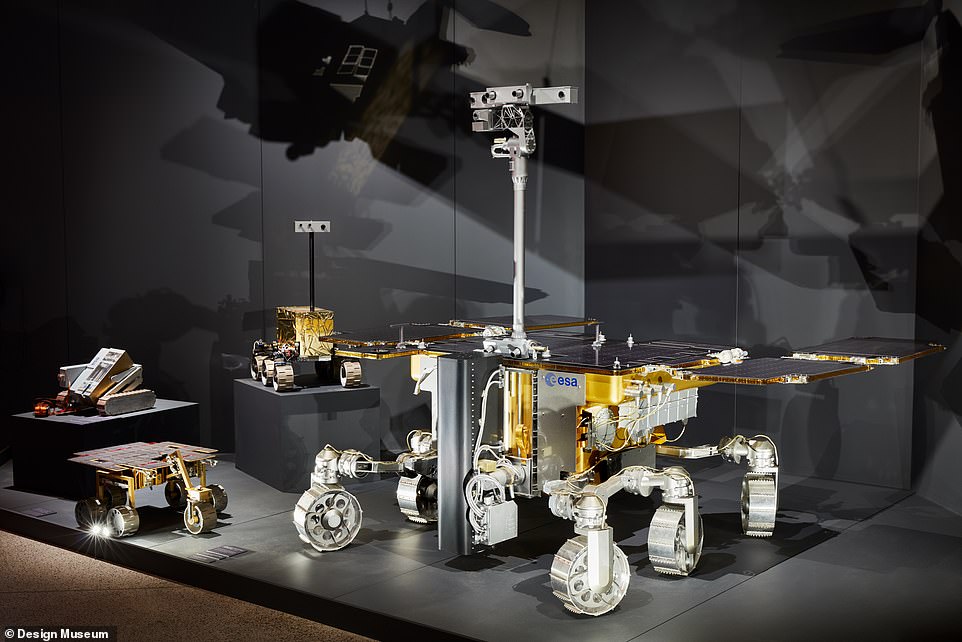 Bridget is a full-scale prototype of the European Space Agency’s ExoMars rover, Rosalind Franklin, which will search for signs of alien life on the red planet 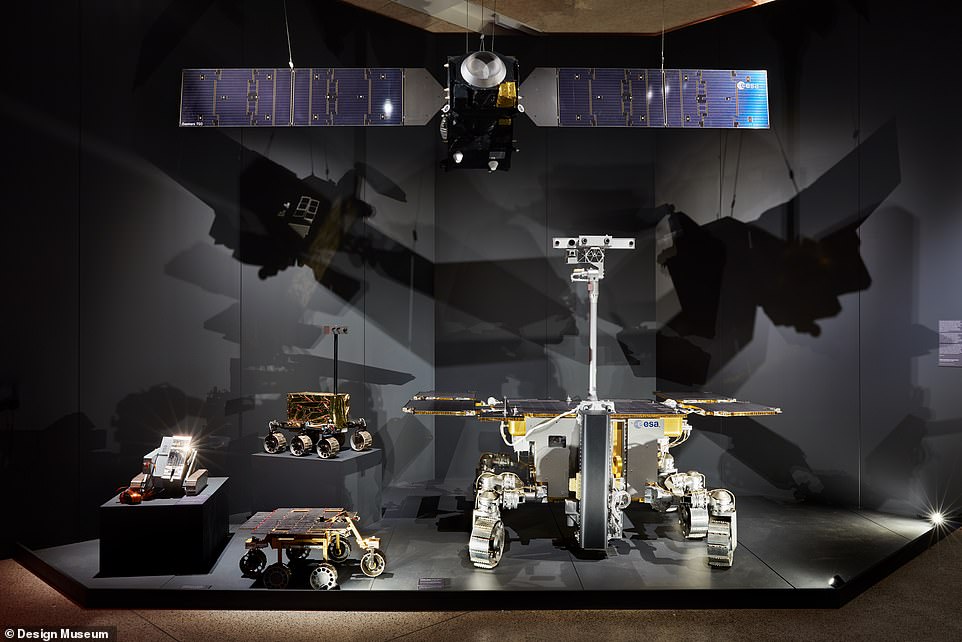 ‘The rover is being sent to look for traces of past life on the planet and will conduct a series of experiments using its nine built-in tools.

‘The model is exhibited alongside a series of three engineering prototypes that show the different types of locomotion that were tested during the rover’s development, which gives you an idea of how tricky it is to design something that can safely and reliably travel along the planet’s surface.’

On display for the first time as part of the exhibition is NDX-1, the first prototype spacesuit designed specifically for use on Mars.

It was created to withstand the planet’s gruelling conditions, while soft fabric-joints improve mobility when compared to the suits used on the moon.

‘Another stand-out exhibit for me is the NDX-1 spacesuit which has been developed by Dr Pablo de Leon from the University of North Dakota,’ said Watson

‘Dr de Leon has been working at the Space Suit Laboratory for a number of years developing the suit for NASA, producing a highly developed prototype of the type of suit astronauts are likely to wear on the Martian surface. 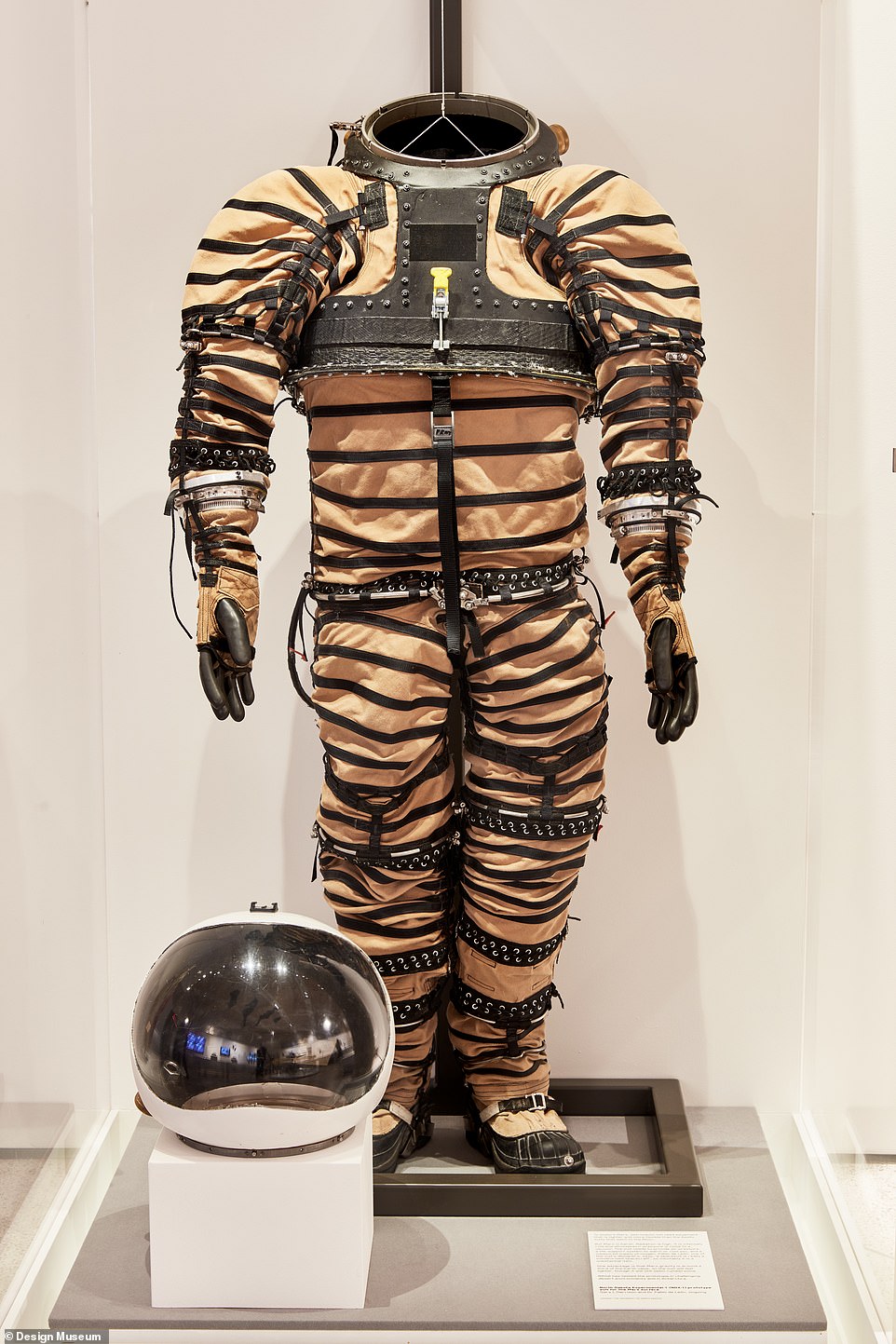 The NDX-1 spacesuit was created to withstand the planet’s gruelling conditions, and features soft fabric-joints to improve mobility

‘I think what is interesting about it is how much it recalls the suits worn during the Apollo missions, but with some fundamental differences.

‘The suit is lighter and allows for greater freedom of movement (crucial when conducting experiments).

‘The helmet has an extra wide visor to broaden the field of vision, and the fabric of the suit is designed to be resistant to the damaging effects of Martian dust – a toxic, sharp and sticky substance called regolith.’

From Faeces to Food, Lydia Kallipoliti, 2019

As her final highlight from the exhibition, Watson picked a project by architect and engineer Lydia Kallipoliti, which imagines a Martian colony as a ‘digestive inhabitable machine’.

In her designs, human excrement is used to power combustion devices and the biological parts of the system they inhabit.

‘Whether or not you would like to go to Mars, or even think that humankind should go there at all, there are a huge number of lessons that can be learnt from designing for the Red Planet that have direct and important applications here on Earth,’ said Watson.

‘Key among those is sustainability, as the limited payloads mean that any resource that is brought to Mars will need to be re-used and recycled in perpetuity. 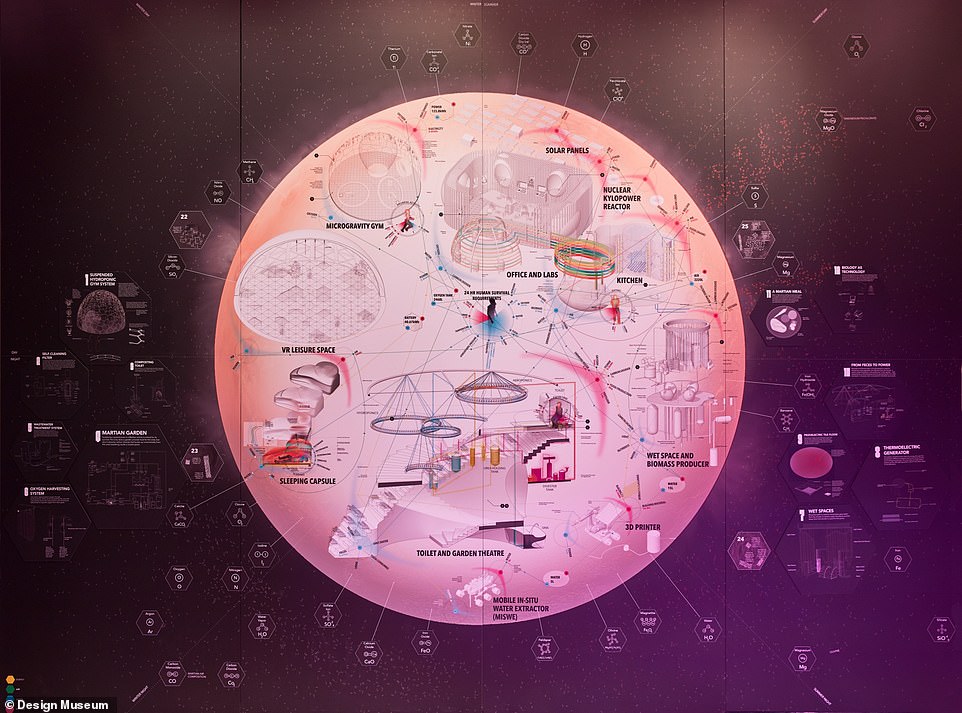 ‘Having a zero-waste lifestyle on Mars is not “a nice thing to do” as we might think here on Earth, it is a matter of life and death.

‘With that in mind, we commissioned the architect Lydia Kallipoliti to produce this huge infographic showing what you would need to do to create a closed-loop system within a Martian habitat.

‘All inputs and outputs – from the oxygen you breathe in, the carbon dioxide you breathe out, the food you consume, the faeces and urine you produce, your sweat, your body heat – need to tally up perfectly to create a liveable ecosystem.

‘It is an incredibly complicated exercise, and one of the main challenges for prospective Mars missions, but it helps us to appreciate the abundance of resources that we enjoy here on Earth, and hopefully will act as a reminder that we need to make more intelligent use of what we have.’

The ‘Moving to Mars’ exhibition is running at the Design Museum in London until 23 February 2020.