The ‘soap opera effect’ that could be RUINING your TV viewing experience: Hidden ‘Motion Smoothing’ feature gives films and programmes an artificial look – how to turn it OFF

A feature built-in to your smart TV known as motion smoothing could be ruining your cinematic viewing experience without you even knowing it.

But when the feature is turned on, it causes the so-called ‘soap opera effect’ in films – making them look cheaper and less cinematic, as if they were raw video feeds.

Unfortunately, high-definition widescreen TVs tend to come with motion smoothing already on – but the good news is you can turn it off. 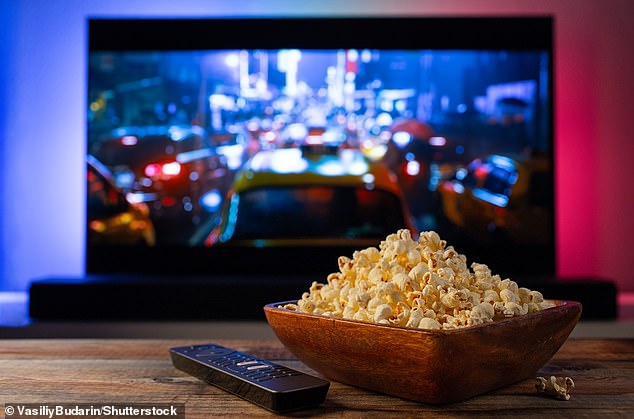 Motion smoothing is a form of video processing in which intermediate animation frames are generated between existing ones.

Motion smoothing settings look great on live TV, like sporting events or parades, which are filmed at 30 frames per second.

Most movies, however, are filmed at 24 frames per second and are not intended to be viewed with motion smoothing.

When turned on, this causes the dreaded soap opera effect – making films look less cinematic, as if they were raw video feeds.

One film fan on Twitter said turning off motion smoothing on your parents’ TV is a ‘Thanksgiving tradition like no other’.

Another posted: ‘Happy “turning off motion-smoothing on your parent’s TV” day!’

Motion smoothing was created with the intention of making fast-moving images from sport broadcasts look less blurry, by putting in artificial frames.

Each of these artificial frames is effectively a hybrid of the frame before and the frame after.

The feature makes sense for sports broadcasts, as without it the fast on-screen action of a football or basketball match can lose sharpness and seem blurry.

But when it is applied to big-budget blockbusters, it makes them look like they were shot on video, rather than 30mm or 70mm film.

It makes most movies look as if they were shot on high-speed video rather than film,’ Cruise said in a video from the set of Top Gun: Maverick.

‘Most HD TVs come with this feature already on by default, and turning it off requires navigating a set of menus.’ 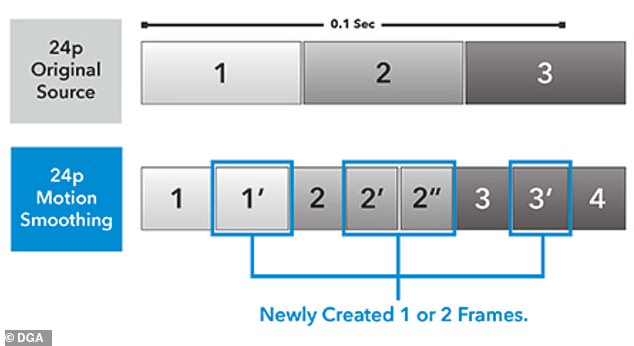 Motion smoothing adds artificially generated frames to increase the frame rate. Each of these artificial frames are effectively a hybrid of the frame before and the frame after

Hillcoat said motion smoothing is ‘heartbreaking’ because it makes a film look like ‘moving plastic sludge’.

‘Digital has plasticity even at the top end [that] we’re all working to break it down or to add texture,’ Hillcoat told DGA Quarterly.

[But] if you aren’t a tech person, and you just happen to watch something, experientially and emotionally there is an alienating effect.’ 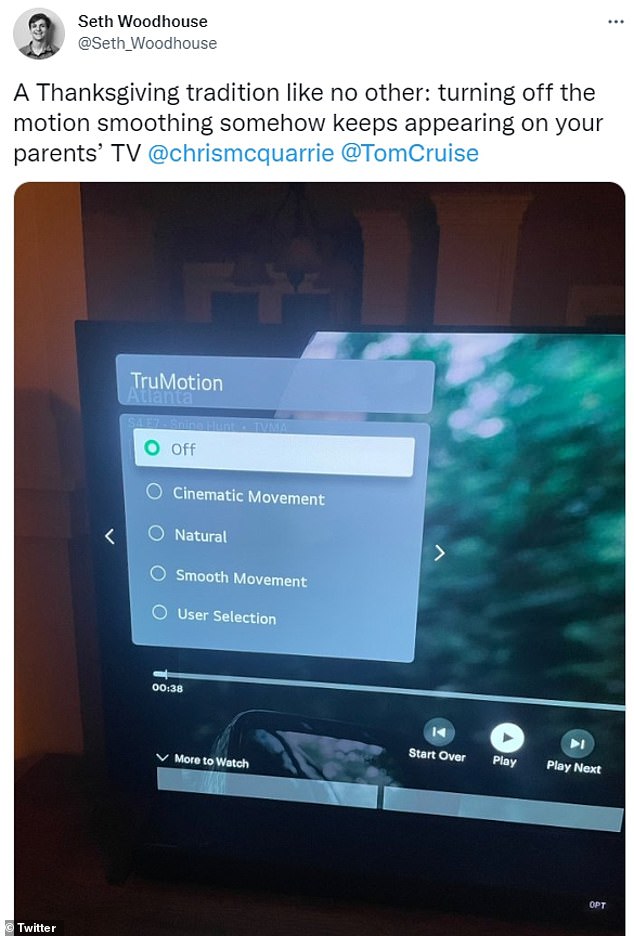 Kusama said directors of photography must ‘feel agonized’ because it’s so hard for people to turn motion smoothing off.

‘I cannot tell you how many late nights in a hotel, when I’m on a TV job, I’m just wanting to watch 20 minutes of high-quality television, and it just all looks like some bizarre soap opera,’ she said.

‘I have to just turn off the TV in frustration when it could just be the click of a button on the remote.

‘We’re not supposed to be seeing Taxi Driver or Persona look like that. Directors of photography must feel agonised.’

Motion smoothing is built into many modern TVs where it’s automatically turned on, but cinema fans can turn it off by heading to their TV’s settings.

The feature goes under several names depending on the brand of TV you have, whether it’s Samsung, LG or Panasonic.

HOW TO TURN OFF MOTION SMOOTHING

– The default setting is Auto. This means the feature automatically turns on and off based on the type of program being watched

– Toggle the TruMotion option to turn it off

– Panasonic says: ‘To make sure you get the smoothest experience, you should check your TV’s settings to see if it has an “Intelligent Frame Creation” feature

‘By turning this feature on, your TV will intelligently add additional frames to the broadcast’

– Open Motion Flow Settings and set to off