Step away from the smartphone: Mothers only devote 25% of their time to their toddlers if they’re distracted by devices, study warns

Mothers devote just 25 per cent of their attention to their toddlers when distracted by a smartphone, a new study has warned.

Researchers fear this could damage a child’s development and cause greater ‘far-reaching’ consequences because of inadequate mother-child interaction.

They suspect the same goes for fathers using a mobile to browse social media and the internet, but didn’t test the assumption in the study. 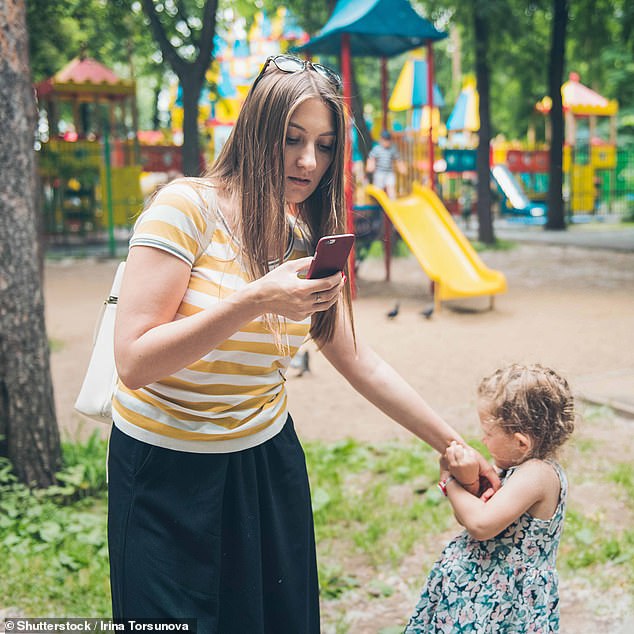 Research: Mothers devote just 25 per cent of their attention to their toddlers when distracted by a smartphone, a new study has warned (stock image)

How do toddlers develop social skills?

Language development explodes from between the ages of two and four, according to American obstetrician Dr Amos Grunebaum.

A child’s vocabulary, understanding and communication skills flourish at around these ages, he says.

These skills are an essential foundation for how a child interacts with others and they significantly impact cognitive, social and emotional development and their future lives in school and beyond.

By the time a child reaches its second birthday it should have mastered pointing to common objects; three body parts; labelling familiar objects such as cup, dog and shoe.

Most two years olds can: follow a two step instruction; use more than 50 words – although half will be unintelligible; make phrases of two or more words; use simple plurals and personal pronouns; know the names of close friends and family.

Most three-year-olds will be able to follow two or three step commands and speak in three to four word sentences.

They should now be much easier to understand and have a vocabulary of around 200 words.

They should be inquisitive, asking many questions – why, what, who, where, when – and be able to say their name, age and gender.

They may understand place words like ‘in’, ‘on’ and ‘under’ and be able to name a best friend.

Their conversation will begin to become more interactive and two-way.

As a child transitions to preschool, their understanding is becoming much more refined.

They will begin to understand time words and order words – today, tomorrow, first, next.

They will be getting better at following more complex instructions and she should be able to hear and understand speech in a variety of settings.

Their pronunciation will be improving but she may still struggle with difficult consonant like sh, th and l.

They may begin to name letters and numbers. They may be able to retell events and keep a simple conversation going.

Their personality will begin to shine through as she chooses topics of conversation that interest her.

Instead, research led by Dr Katy Borodkin of Tel Aviv University in Israel involved observing dozens of toddlers and mothers.

The mothers were asked to perform three tasks alongside their child, all of whom were aged two to three.

The second was to read printed magazines and mark the articles that interested them.

The third saw them tasked with playing with their child while the smartphone and magazines were outside the room in a space of ‘uninterrupted free play’.

Researchers said the goal was to simulate situations in real life where the mother has to take care of her child, while at the same time devoting some of her attention to her smartphone.

To encourage natural behaviour, the mothers were unaware of the purpose of the experiment when browsing a smartphone or reading a printed magazine compared to periods of uninterrupted free play.

‘The mothers talked up to four times less with their children while they were on their smartphones,’ said Dr Borodkin.

Not only did they engage in fewer conversations with the toddler but the quality of the interactions was also poorer, researchers said, as the mothers provided less immediate and content-tailored responses, and more often ignored explicit child bids.

Dr Borodkin added: ‘Even when they were able to respond while browsing Facebook, the quality of the response was reduced — the mothers kept their responsiveness to a bare minimum to avoid a complete breakdown in communication with the toddler.’

As the mothers performed the tasks, the researchers assessed three components of mother-child interaction.

Firstly they examined maternal linguistic input – the spoken content that the mother conveys to the child – which is regarded as an important predictor of a child’s speech development.

Previous studies have revealed that reduced linguistic input leads to decreased vocabulary in children, a shortcoming that may extend to adulthood.

Next, the researchers examined ‘conversational turns’, a back-and-forth between parent and child that helps language and social development, as the child learns that he or she has something to contribute to the interaction as well as the basic social norms of social interactions.

Finally, maternal responsiveness was examined through the extent the mother responded to their child’s speech.

This was measured by the immediacy of the response and its contingency on what the child said.

‘We found that the three components of mother-child interaction were reduced by a factor of two to four relative to uninterrupted free play, both when the mother was reading printed magazines and browsing on her smartphone,’ said Dr Borodkin.

‘In other words, the mothers talked up to four times less with their children while they were on their smartphone.

‘Even when they were able to respond while browsing Facebook, the quality of the response was reduced — the mothers kept their responsiveness to a bare minimum to avoid a complete breakdown in communication with the toddler.’ 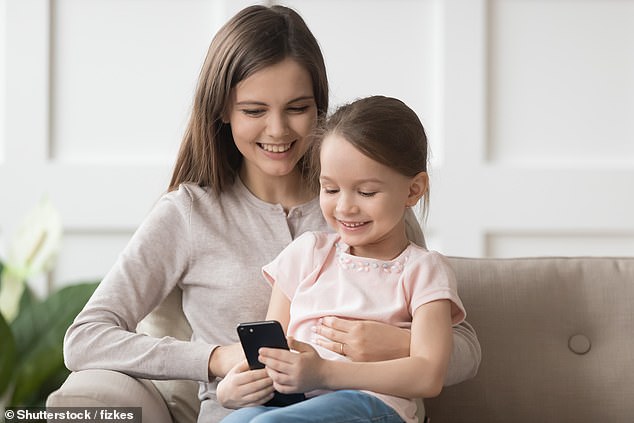 While the researchers did not find that one medium distracted the mothers more than the other between smartphones and magazines, Borodkin said ‘it is clear that we use smartphones much more than any other media, so they pose a significant developmental threat’.

She added: ‘It should be noted that we currently have no research evidence suggesting an actual effect on child development related to the parental use of smartphones, as this is a relatively new phenomenon.

‘However, our findings indicate an adverse impact on the foundation of child development. The consequences of inadequate mother-child interaction can be far-reaching.’

While the study focused on mothers, the researchers believe the findings also apply to fathers and their toddlers as well, since smartphone usage is similar between men and women.

The study has been published in the Journal of Child Development.